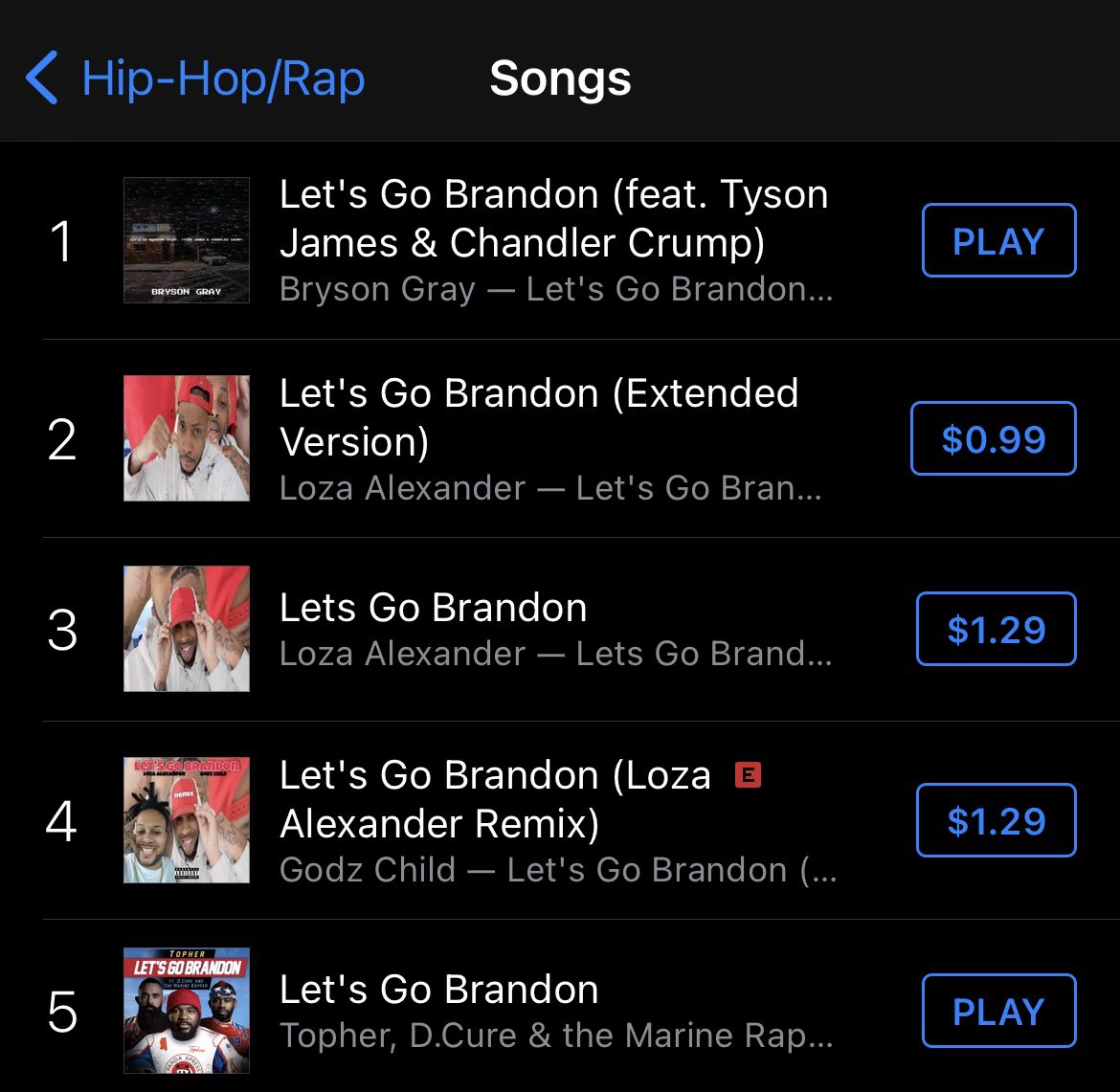 Bryson Grey has hit the top of music charts with his rap about a cultural phenomenon that is uniting Americans all over the country. But, unfortunately, for doing such a positive thing, he is being banned by some Big Tech companies which are showing little concern over their blatant hypocrisy over Hip-Hop.

Asked about how he feels that Tik Tok joined Youtube and others and banned his new #1 Rap tune, “Let’s Go Brandon,” Grey responded to me with the following:

“My comment is simple. It’s crazy that the most banned artist in the country is the Christian that doesn’t curse.”

It is most likely about his politics.

The left is mad that a bunch of conservatives are breaking into “their space”, which is entertainment. Not only are we winning, but we’re winning with different songs with the same name…which all show disdain for this administration. They can’t take it. Keep buying on iTunes.

Grey is joined by other chart-toppers like Air Force veteran, Topher, who is bringing a spotlight on leftism- to rattle his opponents:

“It’s just like leftists to try and discredit something once they start losing. They have raved about Adele topping iTunes charts but now since @RealBrysonGray EVERYBODY off the top its become “Who even uses iTunes anymore”. #LetsGoBrandon”

It's just like leftists to try and discredit something once they start losing. They have raved about Adele topping iTunes charts but now since @RealBrysonGray kicking EVERYBODY off the top its become "Who even uses iTunes anymore". #LetsGoBrandon

Big tech proves its utter disdain for pro-American artists with their censorship of these men.  While Big Tech platforms will promote rappers and gangsta rappers who talk about everything under the sun that is negative and anti-American, they now have censored rappers who are conservative while they are blazing a trail to the top.

A coalition of musicians, including Topher,  and other artists, using the same song title, “Lets Go Brandon,” have made history by dominating music charts.

Any song that is degrading to Black women, about killing the police, about committing a crime  or about political dependence on elite politicians the platforms accept with enthusiasm.

But they do not like Grey or the irony of “Let’s Go Brandon.”

True rap is about the irony of real maltreatment- so cats who have been around the music scene are sure to know that of course rappers are going to like- “Lets Go Brandon.”

Now all of a sudden, Tik Tok and Youtube have lost their sense of humor or understanding of music.

As an Old School fan and former Community Organizer- I love this throwback to the political power of grassroots rap. So I see brilliant activism, entertainment, art, and plain old good old unifying patriotism.

America is united in love for these great tunes and they all together have created cultural domination, and the left is not at all happy.

Grey is leading an alliance of rappers- who are battling far-left policies of Democrat Joe Biden. What is not to love about this?  This is incredible. What is not to be in awe about here:

We are one spot away from completely dominating the Hip-hop charts with #LetsGoBrandon songs!!! We just got to pass up this speck of dust in our way. LET'S KEEP PUSHING FOR THE MOST EPIC SCREENSHOT 📸

Although the old school rappers and their battles were awesome fun back in the day, this cross-promoting of each other has the potential to help heal our land.

This is HISTORIC: the top 5 songs on the iTunes hip hop charts are ALL “Let’s Go Brandon” songs. This has NEVER happened before In HISTORY. Let’s keep it going. pic.twitter.com/HrVrIEcLvB

AMERICA UNITED IS WHAT THE LEFT IS TRYING TO STOP:

The anti-Biden chant, which was turned around on the left in the spirit of Yankee Doodle Dandy, is a rallying cry for the people who have had enough of the left. It is doubtful that Big Tech will be able to suppress this movement.

The chart-toppers, right now led by Grey, are clear that they are not going to stop creating.  They are not going to run and hide in shame after being scolded by the left- and that has the very real potential of carrying out into the streets and influencing many voters to pay attention to who is buying tunes, and who is censoring tunes.

The battle rappers have stepped up.

The great American spirit is not dead. Just go look at iTunes and watch these:

It's never going to stop! https://t.co/ir1RqOJHKq

#LetsGoBrandon – at the Buccaneers game!pic.twitter.com/Vof0ltxh44