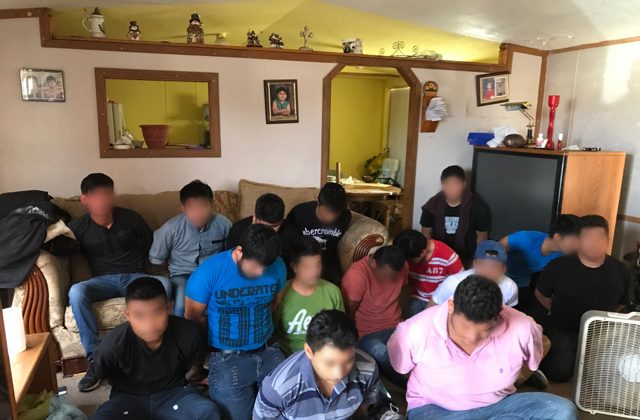 The home is a part of a network of stash houses where humans are stashed. Stash houses are a vital part of immigrant and drug and human smuggling networks on the U.S.-Mexico border.

Photos of the apprehensions showed shoeless migrants sitting on concrete floors in barren facilities and outside tiny houses.

Quiet often facilities do not have running water, electricity or air conditioning.

Migrants found in stash houses along the border typically are held by coyotes or guides until they are directed to load into vehicles to try to cross the checkpoints heading north.

Over 60 have died so far this year in Brooks County, 70 miles from the Mexico border, in an area where they typically are forced out of vehicles and made to walk for miles to try to evade the checkpoint.

Earlier in July a press statement from the same source show that Stash Houses are an ongoing concern:

All migrants were medically screened and evaluated. Those migrants amenable to Title 42 were expelled back to Mexico and others transported to the Central Processing Center to be processed under Title 8.

“U.S. Border Patrol in the El Paso Sector continues to bust dangerous human smuggling organizations located in residential communities throughout El Paso, Texas. Sheltering migrants in unsanitary and unsafe conditions is a common practice by Transnational Criminal Organizations that disregard the safety of the migrants they exploit,” said El Paso Sector Chief Patrol Agent Gloria I. Chavez. “Community and local law enforcement support is fundamental to identify these dangerous criminal activities in our community. We appreciate the assistance we receive from the public in disrupting these criminal smuggling organizations.”

During Fiscal Year 2022, Border Patrol Agents in El Paso Sector have located more than 156 stash houses, leading to the rescue or interception of 1,684 migrants.

U.S. Customs and Border Protection welcomes assistance from the community. Citizens are encouraged to report suspicious activity to the U.S. Border Patrol while remaining anonymous by calling 1-800-635-2509.

U.S. Customs and Border Protection is the unified border agency within the Department of Homeland Security charged with the comprehensive management, control, and protection of our nation’s borders, combining customs, immigration, border security, and agricultural protection at and between official ports of entry.

For more on Stash Houses: