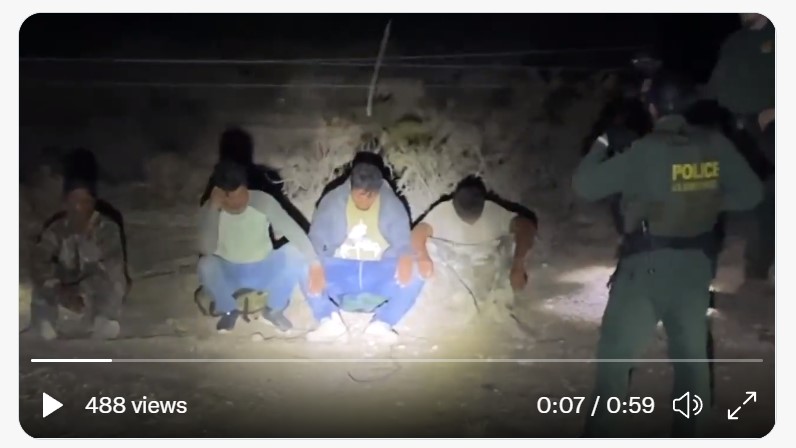 Ben Bergquam is bringing the receipts, live and in-person again, about the crimes that are happening at the US Border- that we know are happening and that politicians and the media are ignoring.

Caught in the dark of night more “military-aged men, many with criminal records and with bad intentions,” as reported by Ben Bergquam, who was on location for his show Law and Border on Real America’s Voice.

Ben took a few minutes out to record the experience of a Border Patrol Agent, outside of Valentine Texas, showing a group of men being detained and taken away in a van.

Bergquam reports on what the lapdog media refuses to cover- which is the real evidence of the crimes that are being committed by the very people who are coming into our country, and making their homes here- while we know very little else about them or their intentions.

Ben talks about the well known- and well ignore evidence of rape and human trafficking that is left along the pathways that migrants and illegals travel to get into the United States. As Ben points out the left says that seeing the facts in front of us- is a ‘Conspirarcy theory’, which makes no sense at all.

More evidence of cartel rape on the on the Mexico side of the wall between Yuma and Los Algodones thanks to Democrat open border policies gets you! #BidenBorderInvasion!
With @AgueroForTexas https://t.co/wF5Gf7JKX5https://t.co/0fzoGK1HZ8@RealAmVoice pic.twitter.com/bBn7RZ8YYk

We know that these things criminal act are happening as reported in this 2021 NBC Report.

After Gustavo and his family were sent back to Mexico after they crossed the U.S. border, his two sons said they were hungry. Gustavo, a Honduran man, sat them on the steps of the bridge and crossed the street to buy them something to eat. He remembers that a car approached him as he walked those steps. “They put me in the car. The children stayed there, waiting for me, but I didn’t come back.”

He had been kidnapped.

Days later, on the same bridge, Jorge Geovanni Díaz, also from Honduras, found himself holding hands with his son, who is 7, after the U.S. returned them to Mexico. Discouraged, he called their smuggler, or coyote. They were picked up in front of the international bridge and taken to a bodega, where almost 200 people were hoping to cross the river again. All of a sudden, armed men came in and violently took them all away. For this man and his child, 44 harsh days in captivity began.

When migrants arrive in these Mexican cities near the border, they’re the targets of a vicious criminal business that kidnaps them and can torture them for weeks, extorting thousands of dollars of ransom from their relatives over the phone. Those who are kidnapped know that if they don’t pay, the outstanding balances can end in death.

Kimberlin Figueroa, another Honduran migrant, was also returned to Mexico by U.S. authorities. “The cars would come up to me and say, ‘Get in here, get in here, get in the car with us.’ I was afraid and didn’t get in the car.” She said she was terrified, because on the way to northern Mexico she had already been kidnapped and she needed thousands of dollars to get her freedom.

Noticias Telemundo Investiga interviewed more than 30 migrants who were kidnapped from 2019 to 2021.

Several of them, including minors, have witnessed the murders of other migrants who tried to flee or whose families were not sending enough ransom.

We know it from this 2009 Outdoorsman article:

n 2005, I wrote a feature story about human/coyote interactions and will never forget speaking with a Jim Hogg County landowner who told me he was finding an increasing number of dead illegal immigrants on his property. Apparently, they were unprepared for the harsh environment during the hot summer and perished on their way through thick cactus and thorns.

We know it from the  2006 Government record:

(Mr. POE asked and was given permission to address the House for 1
minute.)
Mr. POE. Ripped from the bodies of unwilling women, undergarments cling to branches of a tree just a few feet from the lawless U.S.- Mexico border. Dozens of pairs of underwear thrown there by rapists.

These are called rape trees. Each pair is a trophy from a woman that was smuggled into the United States–victims that are heard screaming in the desert. They are raped, even gang raped by illegal human smugglers, then forced into silence.

These trees are a warning. Illegal immigrants evade our borders but crime doesn’t evade them. Some become criminals.  Some become victims.

They are raped, robbed and murdered by other illegals, human smugglers and brutal criminals who then claim other victims.

More than 70 percent of their rapes, murders and child sex crimes are against Americans. One expert who studies sex crimes says about a hundred illegal sex offenders cross the border every day, leaving thousands of victims every year.

Rape trees are a warning to illegals not to talk. They should be a warning to Americans as well: to shout out against illegal entry and human smuggling.

And that’s just the way it is.

This is the crisis that Democrat Joe Biden has escalated.