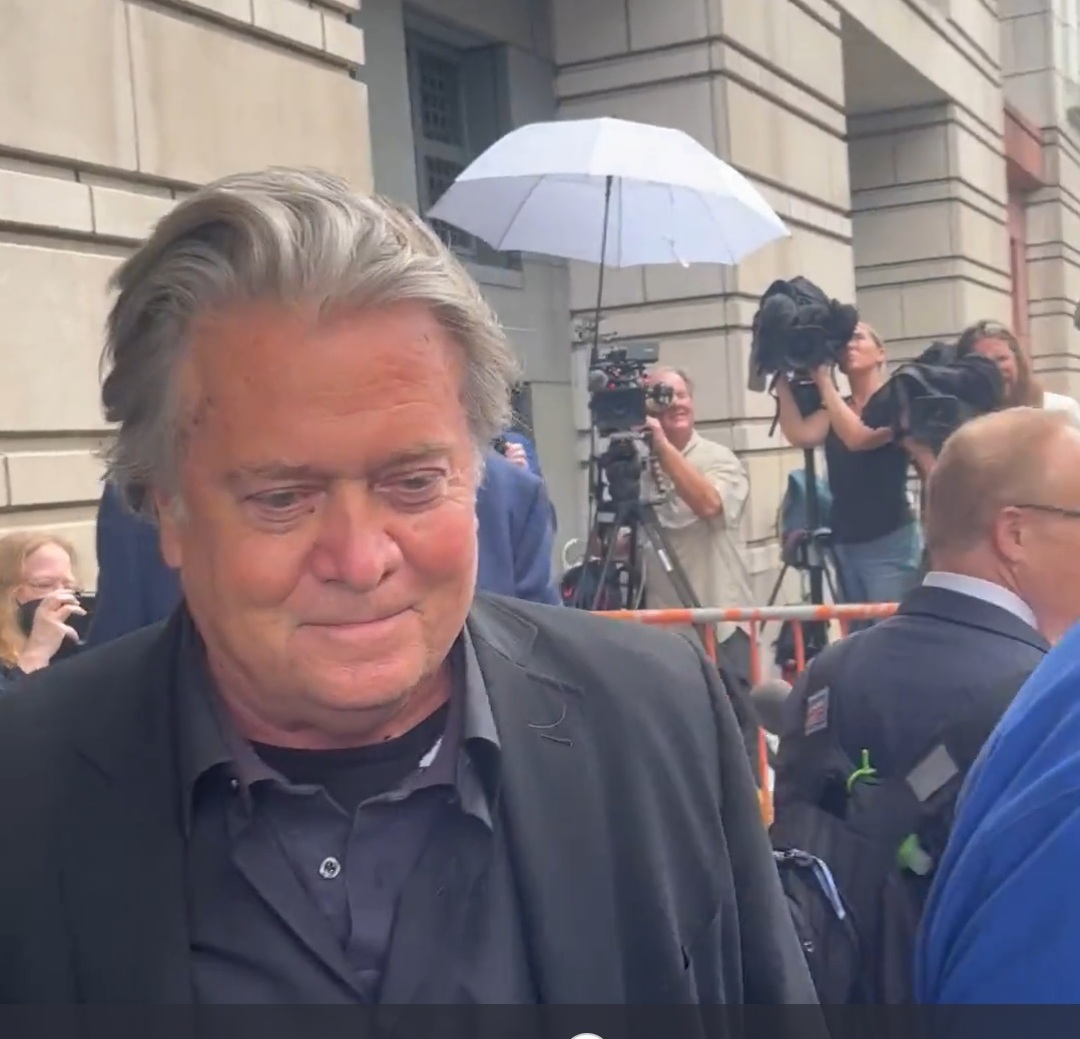 Steve Bannon emerged from the court house, in front of a large crowd of media, where 22 jurors had been chosen to hear evidence in his Contrmept of Congress trial on Monday.

“We look forward to the jury coming back, and we will get into it tomorrow but I think it might have been more productive if we had been on Capitol Hill in front of open mics addressing the nation about exactly all of this nonsense in a show trial on Capitol Hill. It is nothing but a show trial and it is time to start having other witnesses so they can give other testimony- other than what they have been putting up. We will see you here tomorrow morning. I want to thank the judge- and thank everybody,” Bannon said as he patted his lawyer on the shoulder and walked toward his Black vehicle.

As Bannon worked his way around the crowd, one reporter shouted out, “what did you mean by going medieval?”

Bannon answered: “Watch my show and find out,” and then climbed into his vehicle and left the scene.

Here is the story:

One of former President Trump’s closest advisors, Steve Bannon, goes on trial this week. He has been charged with contempt of congress, and that trial comes just as the January 6 committee prepares for a prime-time hearing this week on Thursday.

Bannon is facing criminal contempt of congress charges for refusing to comply with the house committee investigating the January 6th attack on the Capitol.

Records indicate Bannon spoke with President Trump at least twice the day before the attack saying on It’s on his podcast on January 5th that “all hell is going to break loose tomorrow”, which is the foundation for the inquiry into Bannon’s actions.

Bannon cited executive privilege for not complying with the subpoena, even though he’d stopped working for the White House years earlier, so the Democrats do not respect his defense.

Bannon pleaded not guilty, telling reporters he would be taking on Biden and his regime. Last week, Bannon switched and told the committee he was willing to testify after Trump gave him the green light.

Prosecutors argued that Bannon’s new offer to appear would not change any criminal offense committed by not appearing earlier.

If found guilty Bannon and faces up to two years in prison.

According to one Podcast on the trial, with three lawyers, it is likely that Bannon will be convicted and have to spend some time in prison, but may be turned over if Republicans take the House in 2022 and overturn or postponed:

“Bannon is a big boy and he is going to make the best of it- and live with it. He is going to be convicted and go to jail,” Viva Frei is predicting.

The discussion turned to the length of time he may serve: