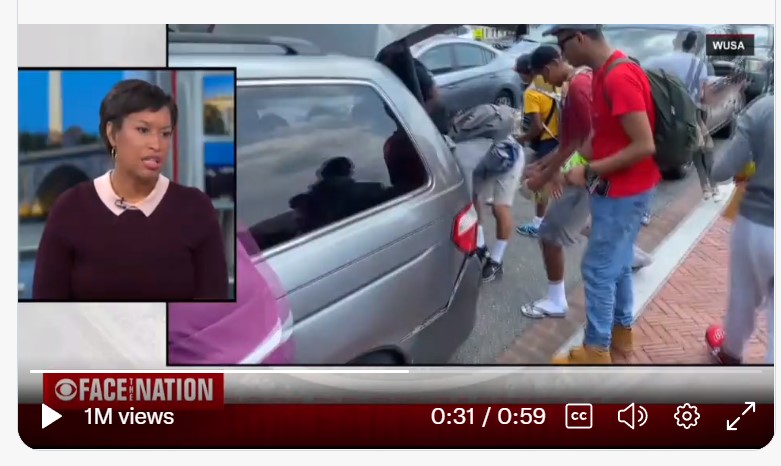 “The clown Mayor of DC said that illegal immigrants are being “tricked” into coming to DC by border states like Texas… because she doesn’t want them in her city… even though she supports open borders. Funny how Democrats always work that way,” Tim Young posted in response to seeing radical far-left Mayor of DC, Muriel Bowser, complaining about the numbers of migrants in the city.

“The Washington Post reported last week, that homeless shelters in DC. were filling up and groups are getting overwhelmed by these buses that the governors of Texas and Arizona are sending here full of migrants. How significant is this influx? ” Face The Nation asked Bowser on Sunday.

“Well this is a very significant issue. We have for sure called on the federal government to work across state lines to prevent people from Really being tricked into getting on buses. We think they’re largely Asylum. Seekers who are going to final destinations that are not Washington. D.c., I worked on with the White House to make sure that FEMA provided a grant to a local organization that is providing services to folks, but I fear that they’re being tricked into Nationwide bus trips when their final destinations are places all over the United States of America,” Bowser said.

“WHOA! I didn’t think ploy would work, but it looks like Texas and Arizona are making D.C. live the pain they are causing to ordinary Americans by failing to secure the border,” Margot Clevland of the Federalist posted in response.

The Daily Mail reported on what is behind Bowser’s reaction:

Washington, D.C.’s homeless shelters are filling up because Texas Governor Greg Abbott is sending busloads of migrants from his state to the nation’s capital, Mayor Muriel Bowser claimed Sunday morning.

The D.C. mayor is requesting that Abbott stop preventing migrants from getting to their final destinations.

Arizona‘s Governor Doug Ducey followed Abbott’s lead earlier this summer as they both started sending migrants from their respective states to D.C. to take some of the load off of the migration crisis hitting border states.

Due to this initiative, homeless shelters in the nation’s capital are starting to cap out with these asylum-seekers.

‘Well, this is a very significant issue,’ Bowser told CBS News Sunday morning program Face the Nation. ‘We have for sure called on the federal government to work across state lines to prevent people from really being tricked into getting on buses.’

‘I fear that they’re being tricked into nationwide bus trips when their final destinations are places all over the United States of America,’ she added.

In other words- she is ok with the rest of the country being burdened- as long as it doesn’t cause her any work.