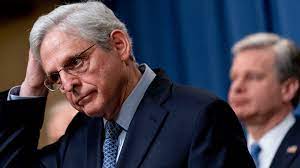 How is there not a mutiny in the Democrat party right now over the disastrous open border policies by the head of their party- Joe Biden?

Democrats know very well that the nation is in trouble and at the mercy of Mexican drug cartels at an alarming rate, and yet- so few Democrats will control their reckless party, which has given free and open access to drug terrorists and criminals. Democrat Attorney General Merrick Garland is shifting blame to drug cartels for a massive amount of crime and death, yet what is he doing to investigate how those drugs are getting into the country?

Here is a report about it.

“DOJ seizes 10 million fake fentanyl-laced pills from May to September. this year,” according to an ABC report recently, adding:

“The Department of Justice seized an estimated 10 million fentanyl-laced pills, the attorney general and DEA administrator announced on Tuesday at DEA headquarters.”

“Of this year, DEA agents conducted 389 investigations, including 35 cartel linked investigations in 201 cities,” Attorney General Merrick Garland told reporters. “Over the course of these investigations, we seized over 10 million fake pills and 82 pounds of fentanyl powder motor crews across all 50 states. That is enough to kill 36 million Americans. In addition agencies 338 weapons during this operation, including shotguns pistols, and hand grenades.”

Senior DOJ officials pointed the finger squarely at the Mexican drug cartels for trafficking in the pills.

“These cartels are responsible for virtually all of the fentanyl and they currently dominate the worldwide fentanyl distribution and supply chain,” DEA Administrator Anne Milgram said.

Milgram said they are primarily seeing fentanyl-laced pills disguised as regular drugs like OxyContin and Percocet.

One other issue they are particularly concerned about is rainbow fentanyl. In particular, it is “largely driven by marketing.”

“The cartels are marketing rainbow colored pills. That are designed to look like candy or prescription drugs. They can come in either a tablet form, or in a block that looks like sidewalk chalk,” the attorney general said. “These pills to contain fentanyl. We know from lamp testing that these rainbow fentanyl is just as dangerous and just as deadly as other forms of fentanyl.”

MORE: 4 arrested after 5,000 pounds of methamphetamine discovered in record-breaking seizure

Milgram said the cartels don’t care who dies. All they care about is making money, she said.

“You know, when we talk about their treachery, what they want to do is sell more fentanyl. Fentanyl is highly addictive. And if someone takes it and they potentially can become addicted, the cartels will make more money. And if they die for the cartels, that’s the cost of doing business. There are 100 million other people on Snapchat 150 million more Americans on Instagram 180 million more on Facebook. So they believe that there will always be someone else that they can sell to.”

The question remains what the Democrat party and administration are doing to stop this invasion and stop the access that drug cartels have to spread their drugs all around the nation.