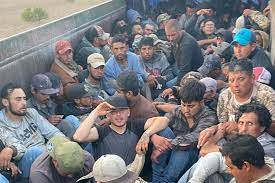 A recent story offers proof that human smuggling is happening in Hidalgo County, Texas- as a TikTok user posted a video on Wednesday evening offering $70,000 to drive the truck from McAllen to Houston, according to Texas DPS, and that youth are being targeted to assist criminal activity. And one US Senator – a Democrat – is scolding Democrat Joe Biden and his administration for dragging American young into a life of crime by helping illegal invaders come into the country Fox News reported the following details last week,after a concerned citizen originally reported the tractor-trailer near a residence about 15 miles east of downtown McAllen. Sheriff’s deputies and Border Patrol responded to the scene and took the migrants into custody. Pictures released by Hidalgo County Sheriff Eddie Guerra show dozens of migrants on the ground in what appears to be a residential area. A TikTok video was posted late on Wednesday evening, seeking “someone who can drive an 18 wheeler right now” from McAllen to Houston for $70,000. The Texas Department of Public Safety verified that the video is authentic and related to the migrants who were located in Hidalgo County on Thursday. Texas DPS spokesman Christopher Olivarez said that law enforcement has seen an uptick in recruitment videos on social media sites since last year. “That is why we are experiencing an increase in human smuggling events along the border,” Olivarez told Fox News Digital. “Many individuals from larger metropolitan areas such as Austin, Houston, Dallas, San Antonio, and even out of state are being recruited as drivers through social media platforms to smuggle illegal immigrants.” Cartels have turned to social media in other states as well. Sen. Kyrsten Sinema, D-Ariz., introduced a bill last week that would crack down on cartels’ use of various platforms to recruit people for human trafficking operations. “Cartels recruit teenage Arizonans to support smuggling and trafficking near our border – luring them into dangerous and illegal activities for easy cash that puts their lives and others at serious risk,” Sinema said in a statement. According to a press statement from Sinema- Biden is a disaster for Americans:

WASHINGTON – Arizona senior Senator Kyrsten Sinema, Chair of the Senate Border Management Subcommittee, and Republican Senator James Lankford (Okla.), Ranking Member of the Subcommittee – joined by Democratic Senator Mark Kelly (Ariz.) and Republican Senator Bill Hagerty (Tenn.) – introduced the Combating Cartels on Social Media Act. This bipartisan legislation cracks down on cartels recruiting teenage Arizonans through social media to conduct smuggling and trafficking. “Cartels recruit teenage Arizonans to support smuggling and trafficking near our border – luring them into dangerous and illegal activities for easy cash that puts their lives and others at serious risk. We’re cracking down on this criminal activity, holding social media platforms accountable, and securing our border,” said Sinema, Chair of the Senate Border Management Subcommittee. “Social media companies like YouTube and Facebook list in their ‘terms of service’ that their platform cannot be used for illegal activities, but then they allow human smugglers to buy ads, promote how to illegally enter the US, and demonstrate how to avoid the US Border Patrol when crossing the border,” said Lankford. “The largest social media companies pick and choose which illegal activities they like and which they do not like, and clearly they like people illegally crossing the US border. Either you block all illegal activity on your platforms or you don’t. Facilitating illegal crossing into the US encourages drug trafficking, dangerous travel along desert roads, and human smuggling. Social media companies may make a profit from selling ads for trafficking and illegal crossings, but human lives are lost and their companies are partners in the crime. This has to stop.” “It’s unacceptable that cartels and human traffickers are targeting and recruiting Americans on social media to break the law with the promise of making a quick buck. Our bill will help put a stop to this alarming practice that’s making the jobs of law enforcement and Border Patrol even harder. We’ll keep working closely with Border Patrol and our border communities to ensure they receive the support they need to keep Arizonans safe,” said Kelly. “Drug cartels have exploited the current open-border policies, fueling record drug-overdose deaths in the United States, human trafficking, and other criminal activity,” said Hagerty. “These dangerous cartels are now exploiting social media platforms to recruit American teenagers to transport migrants and drugs from the border, further endangering our communities. I’m pleased to work with my colleagues in taking this critical step to end the use of American social media platforms to destroy American lives.” Sinema’s bipartisan Combating Cartels on Social Media Act establishes and implements a national strategy to combat illicit recruitment activity by transnational criminal organizations on social media and online platforms to fight back against cartels using online platforms to recruit Americans – including Arizona teenagers as young as 14 – for smuggling operations along the Southwest border. By enhancing cooperation between government agencies and private sector platforms, the strategy will help law enforcement hold cartels accountable while also giving border communities in Arizona the tools they need to engage with and educate at-risk youth who are targeted by the cartels. The bipartisan Combating Cartels on Social Media Act also requires the U.S. Department of Homeland Security (DHS) to analyze cartels’ illicit usage of social media and establishes a portal for technology companies to report cartel recruitment efforts in the U.S. to DHS and state and local partners. Sinema’s legislation comes after a Senate Homeland Security Committee hearing where Sinema secured a commitment from four leading social media platforms to share cartel recruitment content with DHS – a task that will be made easier through the development of the dedicated information-sharing portal required by Sinema’s bill. At this recent hearing, Sinema also questioned social media executives about how the algorithms their platforms use can amplify and promote cartel-sponsored content. The Senator asked TikTok and Meta executives about what their companies are doing to prevent cartels from using their platforms to recruit teenagers along Arizona’s border and highlighted how the lives of innocent bystanders and migrants are put at risk when cartel-recruited teens flee law enforcement at high speeds in border communities across Arizona. Sinema’s bipartisan Combating Cartels on Social Media Act will ensure all online platforms work together with DHS to prevent Arizona teens from being preyed upon by cartels, while also ensuring government agencies prioritize tackling cartels’ use of social media to recruit Americans.