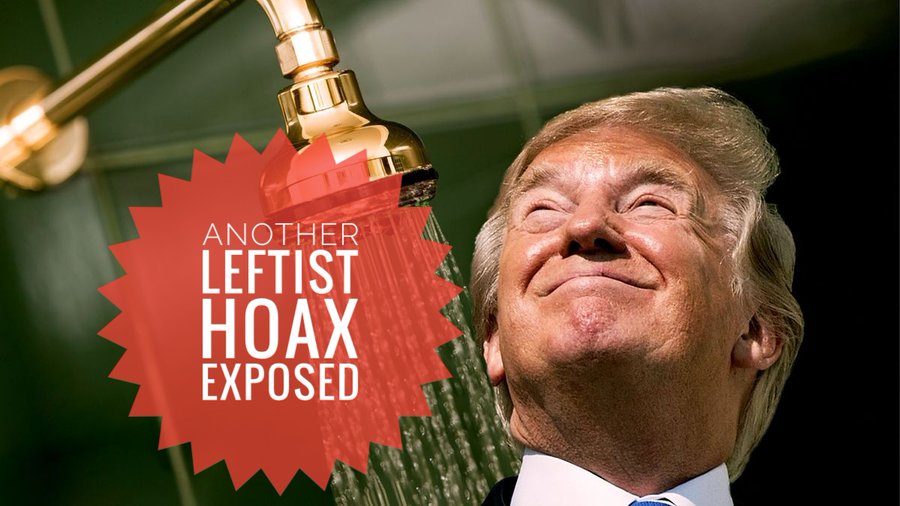 There are finally some small consequences for the people who made up and who spread the crazy story known as the “Steele Dossier or the Pee Pee Tapes”, as one media outlet has reported on Wednesday that the DNC and the campaign of Hillary R. Clinton are being funded by the FEC over spreading Fake News.

The left loves this crazy, disgusting and obviously fake story, and built an industry around what Buzzfeed passed off as real news. Check this out from Know Your Meme.

#Pissgate refers to an ongoing political scandal surrounding allegations made by a former British intelligence officer that the Russian government has been grooming Donald Trump to be the United States president for years, while simultaneously gathering compromising information about him, including a claim that Trump hired a group of prostitutes to urinate on the bed in the presidential suite of the Ritz Carlton Hotel, where President Obama and the First Lady had stayed during their official trip to Russia in 2013.

The Washington Examiner wrote about their scoop:

The Federal Election Commission has fined the Democratic National Committee and Hillary Clinton’s 2016 campaign for lying about the funding of the infamous, and discredited, Russian “dossier” used in a smear attempt against Donald Trump weeks before he shocked the world with his 2016 presidential victory.

The election agency said that Clinton and the DNC violated strict rules on describing expenditures of payments funneled to the opposition research firm Fusion GPS through their law firm.

In the hours leading up to 2017 inauguration of President Donald J. Trump, Americans learned a bizarre story that intelligence officials had briefed both Trump and outgoing President Barack Obama about a report that contained some obviously lurid and crazy accusations against Trump.

The most famous mythology that come out of the story was that there was a video of Trump, a known germophobe- consorting with prostitutes in a Russian hotel room, where urine was exchanged- and which became known far and wide as “the pee tape.”

The dossier, many suspected and all people learned later, had been compiled at the request of Trump’s Republican opponents for the Republican presidential nomination and then sold later on behalf of Hillary Clinton’s Presidential campaign.

According to court documents, Christopher Steele, a former British intelligence agent, became involved with the dossier- at some point after it became a Clinton operation.

When John Durham, Special Counsel, appointed by then-Attorney General Bill Barr toward the end of the Trump administration, has indicted a crucial source and thus discredited the dossier, the mainstream media has been called out for their obvious assistance in spreading the misinformation about Trump, to help the Democrats.

The media is complicit.

Sara Fischer of Axios called the way the media covered the “pee=Pee” dossier“one of the most egregious journalistic errors in modern history.”

Writing in The New York Times, Bill Grueskin of the Columbia Journalism School lamented that “so many [journalists] were taken in so easily because the dossier seemed to confirm what they already suspected.” Needless to say, Fox News has been having a field day.

According to the Washington Examiner:

A combined $1,024,407.97 was paid by the treasurers of the DNC and Clinton campaign to law firm Perkins Coie for Fusion GPS’s information, and the party and campaign hid the reason, claiming it was for legal services, not opposition research.

Instead, the DNC’s $849,407.97 and the Clinton campaign’s $175,000 covered Fusion GPS’s opposition research on the dossier, a basis for the so-called “Russia hoax” that dogged Trump’s first term.

The memo said that the Clinton campaign and DNC argued that they were correct in describing their payment as for “legal advice and services” because it was Perkins Coie that hired Fusion GPS. But the agency said the law is clear and was violated.

It added that neither the campaign nor the party conceded to lying but won’t contest the finding. “Solely for the purpose of settling this matter expeditiously and to avoid further legal costs, respondent[s] does not concede, but will not further contest the commission’s finding of probable cause to proceed” with the probe, said the FEC.

The FEC, in a memo to the Coolidge Reagan Foundation, which filed its complaint over three years ago, said it fined Clinton’s treasurer $8,000 and the DNC’s treasurer $105,000.

The memo, shared with Secrets, is to be made public in a month.

Here are some of the stories I wrote about the “Pee Pee” tape hoax:

This is outrageous, what they lied about- and then used the media to distribute. https://t.co/wDfQOgQGqF

We have been writing about this for a long time #Dossierhttps://t.co/tSGN9Tl8Ow

More of our courageous coverage of the Pee Pee Tapes: https://t.co/cfM7t0ku17

I scooped the entre lapdog media on this too:https://t.co/O1vsNahX51