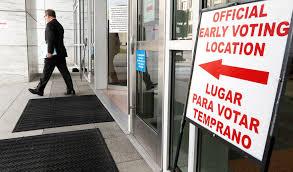 While the Democrats shift the blame for the massive invasion into our country onto Republican Ron DeSantis for hurting the rights of illegal invaders and making them look foolish, the real problem is that the country is being flooded by people from all over the world who are being assisted in snatching up resources that should be going to Americans first.

“These Democrats need to be stopped ASAP, they are making their big push to get Illegal Aliens & Non Citizens Voting on a FEDERAL & STATE ELECTIONS,” one poster wrote on Twitter, in response to the obvious Democrat plot to flood our elections with the only people who could support them- illegal migrants.

The Democrats are exposing their complete lack of logic- again- and hopefully, the public is paying attention because the number of people breaking into our country has now hit a new record

Shifting the focus on to the feelings of the invaders is one way to get people to ignore the huge story that is unfolding right before the mid-terms in elections- which promises to be a massive embarrassment for the left.

The number has already surpassed 2021, which set its own record, but the media is sad about the feelings of the 50 migrants who chose to go to an East Cost paradise and were treated like third-world invaders by the community of leftists in Martha’s Vineyard.

And what is really unfolding appears to be a massive vote harvesting scheme, as the left draws invaders in- talks about their rights and pushes for them to be allowed to vote in the upcoming election.

It really could not be more clear- that the Democrats want to replace American voters.

AND WAIT! THERE IS MORE

Illegal migrants are already voting in some places, and once they can vote- there is little that can stop them from having other rights.

Considering this article in the SanFrancisco Chronicle about RESTORING Migrants’ voting rights.

“A state appeals court on Wednesday restored voting by noncitizen parents in San Francisco school board elections, at least for now, putting a judge’s ruling on hold that said the California Constitution allows only U.S. citizens to vote.

In a 3-0 decision, the First District Court of Appeal in San Francisco granted the city’s request for a stay of the July 29 decision by Superior Court Judge Richard Ulmer declaring unconstitutional a city ordinance, in effect since 2018, that allowed noncitizen parents of school-age children to vote in school board elections.

The stay is to remain in effect while the case is on appeal, which apparently means noncitizens can take part in the November election. The court did not say whether it agreed with Ulmer’s ruling, declaring only that because the judge issued a “mandatory” order, requiring San Francisco to set its ordinance aside, it was automatically stayed on appeal.

The justices also said individuals and groups that challenged the ordinance had not shown they would suffer “irreparable damage in their business or profession” if the law remained in effect during the appeal.

The order came a day after an Alameda County judge refused to remove a measure from the November ballot that would authorize the Oakland City Council to allow the city’s 13,000 noncitizen parents or guardians to vote in Oakland school board elections. Judge Michael Markman said he was inclined to agree with Ulmer’s San Francisco ruling but that local residents had a right to vote on the issue before any judicial review.”

And it is not just in looney San Francisco- illegals have the “right” to vote in other states, according to this 2021 Pew article:

The Vermont legislature overrode vetoes by Republican Gov. Phil Scott, greenlighting voter-approved changes to the city charters of Montpelier and Winooski. Those cities now allow all residents over age 18 to vote in city elections, regardless of citizenship status.

The movement to let all adults vote in local elections hasn’t had widespread success in modern times. Until lately, just San Francisco and nine Maryland cities have allowed noncitizens to vote in local or school board elections. While two towns in Massachusetts have passed resolutions in recent years calling for noncitizens to be allowed to vote locally, the state legislature has yet to approve those changes. But those cities may soon have company.

Lawmakers in Washington, D.C., Illinois and New York City this year are considering legislation that would offer the vote to noncitizens for local elections, such as for city council or the school board. These proposals have ignited the fierce debates that often come with immigration and voting rights proposals. Some states, meanwhile, have gone in the opposite direction in recent years, explicitly banning noncitizens from voting.

In Vermont, legislative proponents pointed out that noncitizens are taxpayers, arguing they deserve a say in who represents them.

“People always glom onto the idea that you have to earn our right to vote by becoming a citizen,” said Democratic state Rep. Hal Colson, who sponsored the Winooski bill. “I just don’t buy that. We’re talking about a large chunk of the community that’s closed off.”