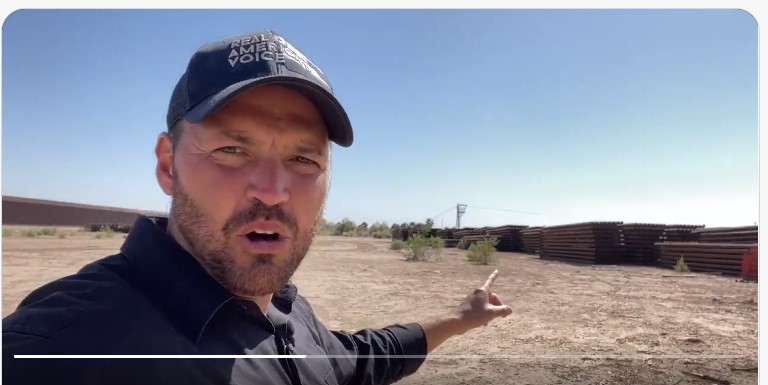 Ben Bergquam, the host of Law and Biden on Real America’s Voice, constantly lays out the consequences of Democrat Joe Biden’s open-border agenda on the United States of  America, as one of the few courageous reporters willing to go directly to the border and report live on the scene.

Bergquam was at a section of the  border security wall this week, where he interviewed illegal immigrants who had made the journey to America from all over the world.

There was nothing stopping the large group of people from walking right over the border and into the US.

Bergquam slammed the Democrat dream team over the lack of security, scanning the broken down wall system- in a video and showing his audience the gaps in the wall while responding to testimony by Mayorkas from DC on Wednesday about the actions of the Democrat government.

“This is President Trump’s wall material there- left sitting out here to rot in Arizona, and all of those gaps you see in the wall- that is because of you and Joe Biden, Secretary Mayorkas. That is you and Joe Biden and that is not effectivly managed.  All you have effectivily managed to do is allow our country to be invaded.  You should be removed from office and so should Joe Biden,” Bergquam said in a recent video from Yuma Arizona.

The damage the Democrat administration is doing is finally getting some reaction by a few Republican lawmakers, but there is a total lack of concern by the Democrats and the media.

“Secretary Mayorkas, Joe Biden and the Democrats have “effectively managed” to sell out America! From Yuma Arizona as the invasion intensifies, Bergquam reported along with a clip of his video rebuke of the Democrat dream team- Biden and Mayorkas.

Fox News reported on the calls for Mayorkas to resign:

Rep. Higgins implores Mayorkas to resign over border crisis: ‘Save the country the pain of your impeachment’ Mayorkas said he disagreed that the border crisis was ‘disintegrating’ American sovereignty.

Rep. Clay Higgins, R-La., repeated calls for Department of Homeland Security Secretary Alejandro Mayorkas to resign his post amid a crisis at the southern border Wednesday, calling his leadership a failure.

“This disaster we have at our southern border, this disintegration of our sovereignty, cannot be sustained. Anyone who has two brain cells that perhaps would bump into each other would know that it’s abject failure down there,” Higgins told Mayorkas, who testified before the House Committee on Homeland Security about the department’s budget request for 2023.