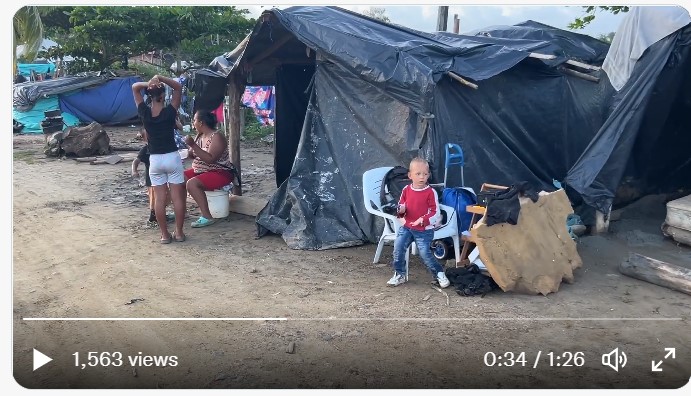 Ben Bergquam is on location in Colombia-South America, for an upcoming episode of Law and Border for Real America’s Voice.  While there, he discovered a holding area and transportation hub for what he identified as people from Venezuela who were headed into the Darrien Gap of Central America so they could complete their journey to get to the United States of America.

Driven by the consequences of Socialism and Communism in their own homeland, people in Southern and Central America are leaving what they know to seek a better life as economic migrants to the United States.    And those people are being enticed to do so- by corrupt players, who will benefit financially from numerous deceitful tactics that are driving a massive human migration from all over the world.

Bergquam often exposes the corruption and greed of the Non-Government Organizations (NGOs) and nonprofits- who are aligned with the Democrats to take advantage of people and funnel massive amounts of funds through their organizations- claiming they are humanitarians and trying to help displaced people- when in fact they are creating and forcing the entire situation and laundering money through their groups while doing this.

The migrants are being herded, by the Secretary Mayorkis of the Department of Homeland Defense,  to get to the United States through Central America, and it is unlikely they are being told how dangerous the trek will be.  The Telegraph describes the journey through the Darrien gap in a chilling description:

“The Darien Gap is known simply as “hell” to those who survive it. How else to describe this lawless and roadless expanse of dense jungle swamp marking the border between Colombia and Panama?

Navigating this treacherous crossing requires traversing steep mountain passes patrolled by drug traffickers and armed bandits looking to rape and rob, walking 12-hours a day in stifling humidity and wading through endless swollen rivers which can rise several metres in an instant, sweeping the unsuspecting into their murky depths.

Then there are the savage insects which bite every inch of bare skin and a multitude of venomous snakes. The jungle paths are lined with the rotting corpses and bones of those fallen by the wayside.”

We have covered the stories about the Catholic Charites who make massive funds on these migrants:

@BenBergquam has been front and center on these stories for years: https://t.co/UKhBTERyPr

But we know that they often mislead those people and leave them in terrible situations – even to face death.

Berquam, who has also been on location in the Darien Gap area, knows that the trek through that area is often deadly and always hazardous.

Bergquam and Michael Yon covered that in this series of articles:

Recently Bergquam witnessed the tent cities that were sent up filled with people who are being taken through the Darrie Gap and headed toward what they believe is an easy journey to the United States of America, where they will walk in and start a fresh new life.
Here is what Bergquam reports about the area:

“The border is open,” that’s what they say. Mostly Haitians and Africans crossing from Necocli, Colombia to the Darien Gap this morning.

Bergquam’s advice for them- is to stay home.

From Necocli, Colombia in a camp where mostly Venezuelas wait before crossing the sea and entering the Darien Gap. #BidenDidThis #Socialismo #Sucks @RealAmVoice pic.twitter.com/tiicRJEQHp

Please visit our sponsors… if you want to support Bergquam’s fearless reporting.
FIGHTING FOR FREEDOM AND HAVING FUN

Instant Classic! From Colombia with @OscarBlueRamirez… the making of one of our famous #MyPillow ads! 😁😁😁https://t.co/kr0NLAynTz promo code: FRONTLINE@realMikeLindell pic.twitter.com/NyWH3czyaU