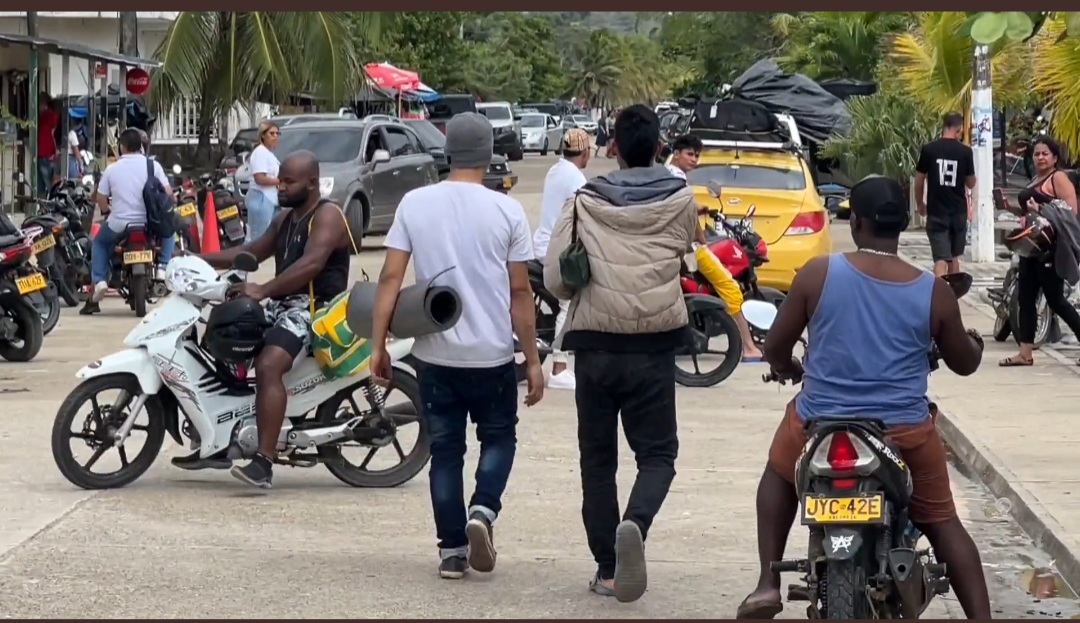 Ben Bergquam and Oscar El Blue, two correspondents for Real America’s Voice, have spent a full week exploring how migrants from as far away as African countries are coming through Central and South American counties on their way to the Darrien Gap in Central America with a purpose of getting to the Southern Border of the United States, where they will walk through insecure borders and into the countryside.

“The local trade has changed, now these beautiful little tourist towns- trade humans,” Bergquam said on day 6 of the journey around Colombia and South America, interviewing migrants from Africa and seeing transformed communities designed to assist migrants going to the US.

Economic migrants who are displaced by the policies of socialism and globalism are leaving their beautiful and mostly peaceful homelands to come to the United States of America- where they will disrupt and replace American minority communities- and have a tremendous impact on the middle class  and working-class populations of the US.

But why is this happening?

Steve Bannon, host of the War Room, asked the two what they hoped to accomplish by taking such a very dangerous journey.

Bergquam told Bannon: “Well, ultimately, Steve the truth. We want to show what’s really happening, that’s  from the stories and from the ground itself. . We want to show America and the world the reality of what open borders do not DO just to America, but to every country along the way, and how dangerous this is for the individuals. And also, how beautiful these countries are and how beautiful the people are.   The population in every one of these countries  deserve better than the Hell that they’re given by their governments and by their corrupt officials- who include the Mexican drug cartels and by now the United States government.  Together they are aiding and abetting this destruction of Central, South America and the world.”

El Blue told Bannon that he wants to expose what Biden and US Secretary of Department of Homeland Security, Mayorkas are doing to the United sates and to Mexico.

The Global migration of people into the United States, and other once-prosperous countries, has been unfolding under submission to radical UN policies, as discussed by El Blue, who has studied the situation of global compacts with the US.  It is the UN that appears to be the brain trust of the plan to disrupt Globally popular Populist movements.

The invasion into the US has been funded by Non-Government Organizations (NGOs) and nonprofits, using foreign influences and who are permitted to do so along with the Democrats, as Bergquam frequently discusses in his reporting.

Bergquam, the founder of Frontline America reported to Steve Bannon on the War Room, Real America’s Voice, and on his social media as one of the few brave reporters who is willing to go ‘on location’ to very remote and dangerous places, so he can get the real details of what is happening that is causing the breakdown of the United States of America.

El Blue often travels with him

Last week, at the beginning of their journey in South America, in explaining the purpose of their trip to Steve Bannon on the War Room program, Bergquam and El Blue talked about showing Americans the origins of the invasion in the US and how it starts in Central and Southern America, which is something the mainstream media refuse to show:

Bergquam discovered in Colombia that the local industry changed from agriculture to actually trafficking humans into the US through the deadly Darrien Gap.  In Bergquam’s report, he shows an actually travel agency dedicated to migration and the little businesses that have popped up to sell items to people who will be traveling to cross the US Border :

“This is one of the travel agencies, we’re going to be using to go across. In the past, these were just basic travel agencies for the local area and to explore the beauty of the area that’s here. We’re in the Caribbean Sea, but now thisis actually become  an illegal alien travel agency. Where you have people from all over the world coming in from China from Africa, from the Middle East, obviously from South and Central America on their way to the US,” Bergquam said for his audience, walking along the street of little pop up stands.

“These little Huts right here, all now cater to the people that are crossing illegally. So these little mats are what they use, and you see these up in the jungle and the rivers everywhere, where people have been swept away, you’ve got the the boots that go along with it. You got the little camp stoves that some people take with them. You can buy your machete here, bandanas more of the cooking utensils, the flashlights basically all of this here, the your water for going through the jungle all of this. All these little stalls here are part of the illegal alien smuggling trade,” Bergquam said.

Arriving in Necocli Colombia. Illegal immigration… the new preferred method of travel for millions from around the world thanks to NGOs and the left!

El Blue and Bergquam talk to men and women who are making the journey to the US:

“It looks like they’ve been coached to say they are from Hatti, but we found out later that basically they are from Cameroon and Ecuador , so you see the area is really just a travel agency and the NGO’s are profiting out of this. And, you know, this is the sad thing about it that a lot of people die from trying to cross from where these people are headed,” El Blue said.

From Necocli to Capurgana, Colombia with mostly Africans and Ecuadorians who are heading across the Gulfo de Urabá into the Darien Gap! NGOs and cartels getting rich profiting off their invasion! With @Oscarelblue

We will bring you more details from their daily reports.

Instant Classic! From Colombia with @OscarBlueRamirez… the making of one of our famous #MyPillow ads! 😁😁😁https://t.co/kr0NLAynTz promo code: FRONTLINE@realMikeLindell pic.twitter.com/NyWH3czyaU

Read more about Bergquam and Oscar:

Thank you @Bannons_WarRoom for covering these two! Here are articles about the amazing journey @Oscarelblue and @BenBergquam are taking around South and Central America to expose Biden's lies and find the origins of the US invasion at the border:https://t.co/RzmEqbRiK9