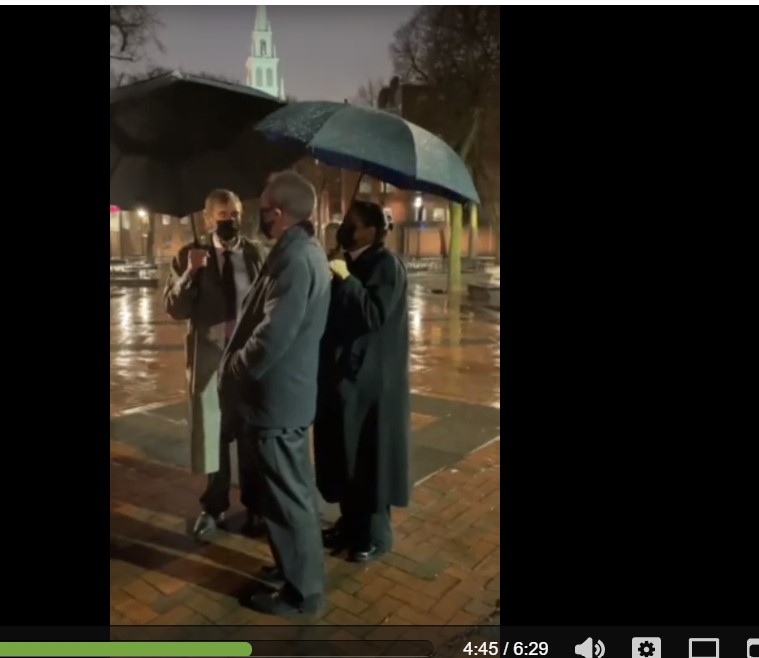 Democrats appear to believe they can speak things into existence so that if they say America is a Democracy- we just magically become a Democracy. People who live in reality know that America is the Constitutional Republic, or some people say a Representative Republic.

Then why do Democrats insist we are a Democracy? Because that is what will give them magical power over the sovereign people of the United States of America. There is no better example of the problems of a Democracy- than this story.

“We want people to fight for Democracy. And as much as we are flawed, we are a Democracy,” Democrat Massachusetts Secretary of State, William Galvin, told an attendee of the Old North Church Jan 6th vigil which he organized in his official capacity as the state’s top election official, is heard saying in video one below.

Galvin devised some political theater to create an attack on the American people, and we have a front-row seat to watch the lies about our system of government.

“This is not just our history this is the history of Democracy,” Gavin repeats, over and over.

“This is for tomorrow’s event. Make sure you use the word Democracy over and over,” Galvin is overheard saying to a fellow speaker Vicar Matthew Cadwell, an employee of the Church who is heard speaking in video two below.

Galvin is also responsible for historical landmarks and museums in the commonwealth, such as the Old North Church

Ahead of the anniversary of the events at the US Capitol on Jan 6th, 2021, and after a year of constant abusive narratives by the left, at least one top election official proves how out of touch he really is, and how much he hates Americans who are concerned about election integrity.

I had an undercover reporter at the event, who shared his story with me- and suffice it say the vigil was a bust.

“I was one of the first people there, and by the time it started, there were about ten people in attendance.  I listened to the conversations in the beginning. Galvin, the Secretary of State, who was talking a lot to the Catholic Priests about how crazy people are to believe anything was wrong with the election. They were all laughing at the idea that people believe there was anything wrong with the way the election was conducted around the country.

At one point they were laughing at the idea that anyone would have access to the machine counters.

It was painful to watch this group of people use an American landmark this way- and for this type of event, but especially while they were calling people like me crazy, for not trusting them. How can I trust them? Just look at what they do when they are given special access- like to these historic places- they exploit their power and mock other people.

All these people did was create an illusion of doing something.  You can see the steeple of the Old North Chruch in the background.  I drove around after I left the event, to get to the other side of the church… there were no lanterns there..  they did not light the lanterns and place them in the bell tower like they told the media they were going to do.

They used an upright to shine a light upon the lanterns at a remote area. They did nothing but lie about us being a Democracy. They talked about Democracy and laughed at how crazy they thought other people are,  and that is embarrassing. They are crazy. They don’t know our history.  They didn’t say the word Republic one time. And what does the Catholic church have to do with any of this?

They talked about unity and showed no concern at all for the people who have been devastated by all of this confusion.  To The Secretary of State, it is just politics as usual.  He just thinks Trump lost- so be it and everyone needs to take his word for it. That is the real crazy.

This ceremony wasn’t actually even at the Old North Church, so the whole thing was just more of their dramas- just like everything else they do. There were two people from a voter Integrity group, one police officer and then a handful of media who were fawning over the speakers.”

Pull up a seat and listen. Three short videos.

In this video, Gavin is overheard saying, [4:40] “people are skeptical of the election because they are crazy. Just because people lose doesn’t mean something has happened.  I have lost before too,” Gavin says in the presence of the Vicar of the church and of of the archbishop of Boston. Gavin also bragged about how he had opened an exhibit at the state museum on defending Democracy.

In this video, Catholic leaders were introduced and a joint statement was read about the importance of Democracy and trusting elections and laws, with no regard at all for the millions of people who are concerned about the integrity of elected representatives:

In this video, Gavin says his political theater is “a message to the country.  It is important for people to know that we should fight for Democracy.  I am also very concerned about the safety of election workers who count the ballots.  There are many of them here tonight from all political parties who have been threatened. (The camera pans to show two people).  In some places, people have been threatened.  MA has defended Democracy from the beginning, these lanterns are to send a message to the nation to fight for Democracy,” he said.