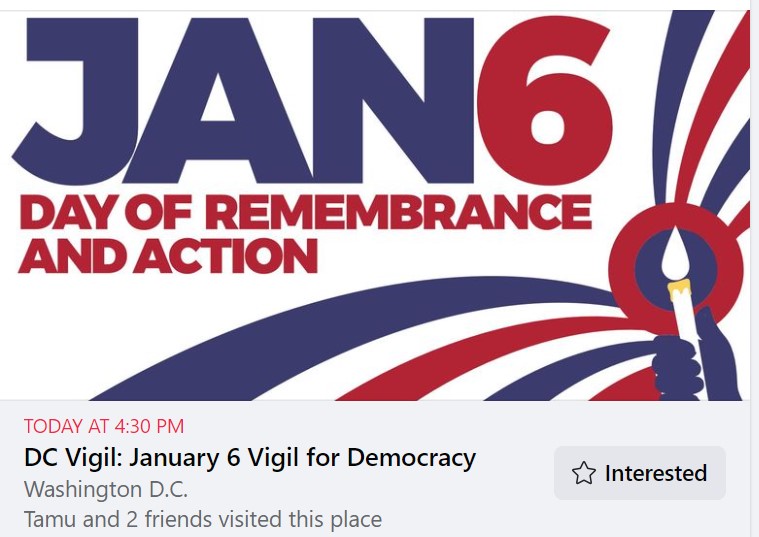 While Democrats are out in force, led by Marxist Left ‘ Non-Government agencies’ (NGOs) and pushing a narrative that they are in danger of losing “Democracy” in our Republic, they are being sloppy and leaving their calling cards all around, so people can start to connect the dots about the actual insurrection that has happened under the leadership of Marxist Democrats and their RINO allies- against the American people.

This is the perfect story to deconstruct the left and their tactics. Start here:

Kyle Shideler, who identifies himself on Twitter as: “Director/Senior Analyst for Homeland Security & Counterterrorism @securefreedom, @claremontinst alum. D&D references”, posted about some political theater that is unfolding in DC, on Thursday, at the US Capitol on the anniversary of Jan. 6th 2020.

Democrats are exploiting the date to ridiculous levels, to claim their victimhood and marginalize President Donald J. Trump and his supporters- and this story is going to show the lengths to which the left will go to manipulate public opinion.

“So the “Candle Light Vigil for Democracy” being held for the Dem’s J6-apoolza, is being organized by a group called Movement Catalyst. Whose the leader of MC? Well lemme show you.,” Shideler reported in Twitter.

As Shideler pointed out the Candlelight Vigil, he uncovered, was organized by a radical far-leftist who also organized the harassment of a duly elected US Senator- a few miles away from the US Capitol- just months before.  This is the type of leadership the Democrat Party, including Kamala Harris and Joe Biden, are following in their party message about the events of January 6th.

SO WHO IS THE INSURRECTIONIST?

I wrote about this group last year:

The left is on a power-drunk binge lately, giddy with the ultimate political power they currently have. They are perfectly fine with Americans seeing how their decade’s long insurrection makes machinery works. Organized and well-funded groups speak openly about harassing US Senators in their homes.  In contrast, their political opponents who support President Donald J. Trump, face cancel culture, legal drama, and persecution in the national media for a one-day event that they may not have even attended.

“Finally, we’ll be having an art build open studio today on Zoom from 4-6 pm. If you’re making a banner and have questions, want to brainstorm, or just like having company, call in and we’ll see you then.
This MFer needs to be CONVICTED. In solidarity, Alex + the SDDC art team,” ShutDown DC wrote in an email to me, a group who is targeting the neighborhoods and homes of US Senators they believe will not vote to convict Trump. Full emails below.

How is that ok in today’s political climate? Here is the messaging:  All Trump supporters are insurrectionists because of what happened on an. 6th.  However, everyone else are good citizens practicing their first amendment rights through all of these decades of domestic upheaval.

This article is a few of the current examples of how Community Organizers use social media to organize their resources in a bold campaign against the American Republic, even after they have won everything.

What do they want?  Now they want revenge. Besides that, this is their employment and their lifestyle, they are not going to give it up now:https://platform.twitter.com/embed/Tweet.html?creatorScreenName=saorsa1776&dnt=true&embedId=twitter-widget-0&features=eyJ0ZndfZXhwZXJpbWVudHNfY29va2llX2V4cGlyYXRpb24iOnsiYnVja2V0IjoxMjA5NjAwLCJ2ZXJzaW9uIjpudWxsfSwidGZ3X2hvcml6b25fdHdlZXRfZW1iZWRfOTU1NSI6eyJidWNrZXQiOiJodGUiLCJ2ZXJzaW9uIjpudWxsfSwidGZ3X3NwYWNlX2NhcmQiOnsiYnVja2V0Ijoib2ZmIiwidmVyc2lvbiI6bnVsbH19&frame=false&hideCard=false&hideThread=false&id=1357875593849806851&lang=en&origin=https%3A%2F%2Fdjhjmedia.com%2Fkari%2Femails-expose-the-lefts-insurrectionist-lifestyle-shutdown-dc-and-others-at-war-with-senators-over-impeachment%2F&sessionId=8adfef6ecc619ffdf4d309ba47236deed7bde58e&siteScreenName=DavidJHarrisJr&theme=light&widgetsVersion=9fd78d5%3A1638479056965&width=500px

When a group shows up at a Senator’s house while he is away and intimidates his wife and young children, that is “peaceful”:

It can not be more clear that the Democrats do not care about riots or intimidation or insurrection, because these are the very tactics they use on the American people daily. Don’t let them get away with their messaging.