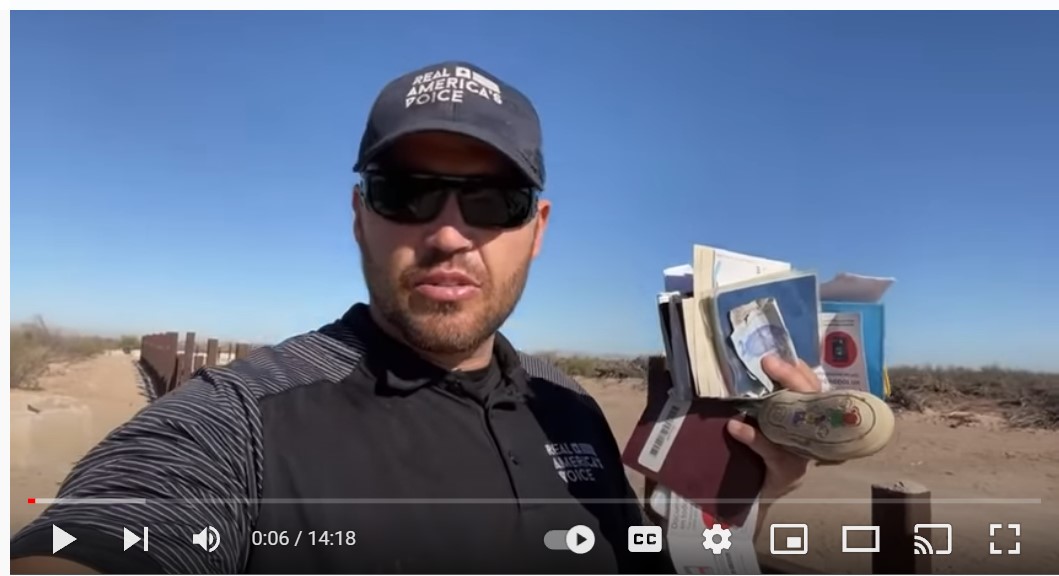 In a series of videos on Frontline American, Ben Bergquam courageously hunts and gathers bags full of discarded identification cards, phones and passports- which , when put together tell the story of an invasion at our Souther Border.  He then gives his viewers a peak into the mindset of the people who are crossing into the United States after discarding important items, like money.

“At one of the main entry points in Yuma, I collected up all of this debris. When I talked to Border Control, I noted the despair in the agent’s eyes and he told me about the lack of help in this area. They have three agents for 60 miles and the cartels know that,” Ben said, showing a large number of items he found in trees and buried in the ground.

“Look at the amount of Trash. Everywhere is trash where this invasion is occurring. They dump their documents because they were told to do that by leftists like Catholic Charities, who told them to get rid of their identifying documents,” Bergquam said before reciting the names of numerous countries and showing the routes the migrants took to get to the Southern Border on the United States.

“Who would dump their phones and IDs?” “More of what the left doesn’t want you to see. The reality of the democrat led American invasion. FrontlineAmerica.com,” Bergquam wrote.

“Passports from India and the Ukraine found at the Arizona border and Border Patrol tells me they can’t even man some sectors because they’re spending so much time processing the illegals that are crossing. Guess who knows that as well? The cartels!”

“This is what Joe Biden is doing- this is the Border invasion. Some of these people are sick and coughing. Border Patrol is going need hours to process them, and the Cartel knows that they are keeping them busy with the sick people,” Bergquam said.