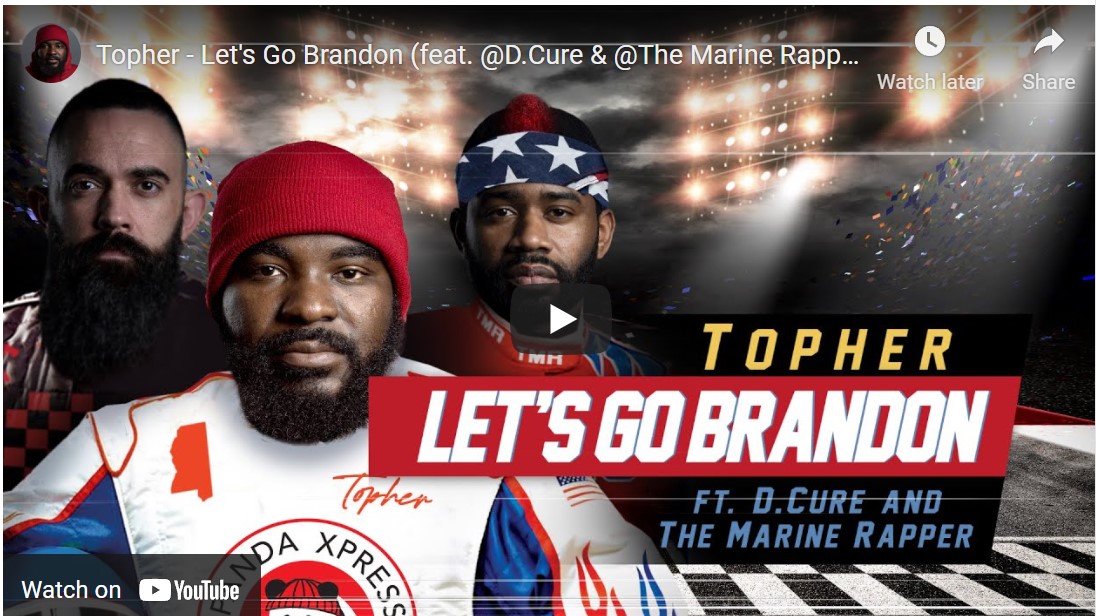 The Space Force is a collaboration of three veterans who are representing American voices very well with their latest chart-topping hit, “Let’s Go, Brandon”. The phrase is a trending commentary on the disastrous performance of Democrat Joe Biden, who calls himself the most popular president in the history of the United States.

Now the phrase is a movement of politics and culture.

The fantasy of Biden’s supporters is called into scrutiny with the growing popularity of mocking Biden, as seen on the Hip Hop charts. For the first time in history, all top spots are filled up with different artists, and different songs, with the same title.

Topher, D.Cure, and The Marine Rapper, two Air Force Vets and a Marine veteran, were all three driven to produce a tune that focused on Biden’s disastrous pull out of Afghanistan, something that was both very personal for all three of them, and what they heard other Americans talking about. And the song is about so much more to them.

“We are showing that you don’t have to give in to the evil machine of the music industry. We are showing that we can see the same success as other rappers who have an orchestrated message, regardless of political affiliation,” Topher told me. ‘We are not backing down to them, and now we are topping the charts.”

Asked about bringing back the original intent of rap, Toper said- “yeah that was when the music was for the outcasts and about having a good time. Then rap turned ugly and soulless.  What we are talking about is for our Veteran friends and for Americans. We need this back as a country,” he said.

“In this song, we want people to have fun, but there is a deeper meaning also, if they want to look deeper,” he told me.

Looking over the other songs of these three individuals exposes a brilliant treasure for old school fans like me because everywhere on their timelines, from their album art to their tunes- they are pumping out what rap music was intended to be. It’s for the rebels, the outcasts, and the marginalized.

“I try to respect the Commander in Chief, but if I am honest Let’s go Brandon brings a relief,” raps Topher.

REMEMBER WHAT HE DID TO THE 13- THE MARINE RAPPER

“That is why I put 13 on my uniform in the album art.  It is for the 13 service members we lost because of Joe Biden,” he said. “I think that is because of the military training that we can collaborate, stay focused and get the work done so quickly,” he told me about the process of bringing “Let’s Go Brandon’ together so quickly and remotely. “We each did our track and then put it together.”

The Marine Rapper, is an experienced storyteller. TMR had experience telling stories from a military perspective, working as a journalist on the front lines of war and conflicts.  He understands the mindset.

TMR told me about how he is inspired at times by country music after driving around in a HumVee with other journalists and one radio, which he didn’t usually have control of.

“When the guy above you has command of the radio and he says you are listening to country, you say yes Sir, and learn to love it.  Johnny Cash grew on me, and I like to bring some of that into my rap,” he told m, breaking into ” A burning ring of fire” on the phone.

“I lived Full Metal Jacket,” TMR told me about his time in the military.

“And it is because of the brave men and women who came before me that I am here.  I always try to do a touch back to them and their service,” he said.

The fans feel that.  From the comment section on Youtube, another Vet, Kenny G, chimes in, in reaction to the song:

“As a Veteran, I really appreciate the line about the relief “Let’s Go Brandon” brings. Thanks for this, Brother.”

WHERE ARE THE 81 MILLION VOTES?- D.CURE

“People are tired of being walked on and our audience is giving us lots of support when we put out this message. There is a lot of frustration out there from people who never saw themselves as political, but how can they overlook what Biden has been doing?” D. Cure told me.

“We were the first rappers to perform at the Alamo,” D. Cure told me about the possibility of the group touring together in the future. “We get out there, but there is some risk when you are rapping about what we are rapping about.  Think of the cancel culture,” he said. “We are controversial.”

Leave it to three Pro-America- Veterans to liberate a powerful healing musical genre, rap, and then top the charts against all odds and political pressure- and give it all back to the American people.

“This makes my heart sing. When young ppl see what many don’t, or won’t, it gives me hope. That is no small thing. Let’s go, let’s go, let’s go Brandon, AYE!'” wrote a fan.

You have to check this out: