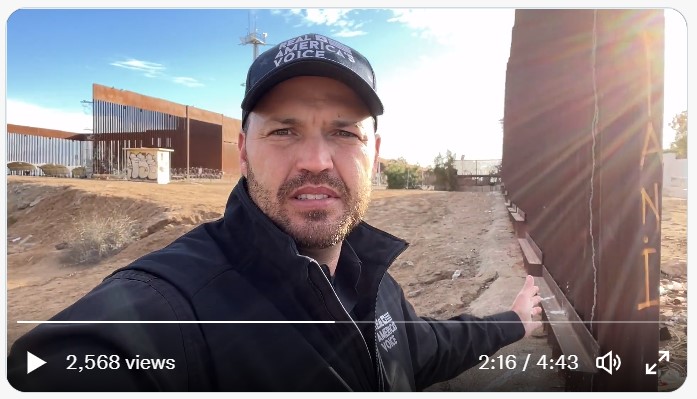 Ben Bergquam, a correspondent for Real America’s Voice and host of Law and Border, documented six men in their late 20s who easily and quickly broke into the United States of America and walked freely into the US without any fear of consequences.

It all unfolded while Bergquam and Oscar El Blue Ramirez were filming an update to a previous story at the border.

“We are being over run at the border and bled out and we are not even trying to stop it,” Bergquam said into the camera, adding:

“We were just here a few months ago. This area was secured. There were multiple Mexican National Guard and immigration officials here securing this spot at the end of the wall,” Bergquam said, pointing out that something had changed.

“Now it is different at the the divide between Baja Mexico and Sonora. Now we’re back here; not a single law enforcement unit is out here. Basically, everyone has just given up and said; this is your problem, America; you’re inviting it. You’re not doing anything to stop it. So why are we going to waste our time and resources down here?” Bergquam said, pointing to the fact that illegals are getting a defacto amnesty and they know it because there is no way to require them to be in court to prove their purpose for being in the US, after running free in the country.

“This is all day every day now. All men. All fighting-age men,”Bergquam said after watching 6 men enter the country while he was filming.