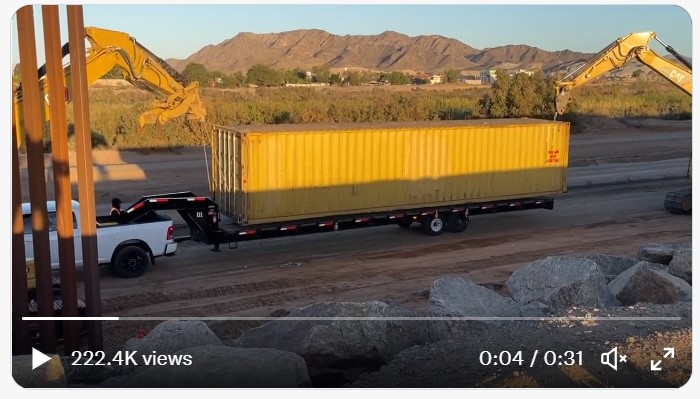 Democrat Katie Hobbs has just been sworn in and already she is showing off her leftist agenda to damage the US border controls. And her first official duty appears to be to weaken the US border.

“AZ: I watched these go up in August and am now watching them come down Contractors aren’t wasting any time out here in Yuma—They’re certainly hustling to dismantle this barrier efficiently,” one AZ reporter posted on Twitter.

Hobbs didn’t even prepare the Border Patrol for her radical move, according to sources. Footage shows containers that were made as a makeshift security border wall are being removed:

The surprise is on law enforcement who are already over burdened by the Democrats radical transformation of the United States:

According to News Nation:

After Arizona spent more than $100 million in taxpayer dollars putting up shipping containers along the U.S.-Mexico border, the state is now shelling out more than $76 million to remove them, according to a contract with AshBritt, Inc.

Shipping containers removed from the border will be taken to the state prison in Yuma. But agents told NewsNation they are concerned over holes that will be left in the wall. Even though migrant encounters actually increased while the containers were in place, agents said they had an operational advantage responding to large groups with them there, because people were only able to cross along one area of tribal land. Once the containers are removed, agents will once again have to respond to multiple areas with limited manpower.

Meanwhile, the take down of shipping containers that were placed in the Coronado National Forest is set to begin Monday. These will go to the state prison in Tucson.

Construction of the container wall began in Yuma, a popular crossing point, this past August despite objections from conservation groups, the federal government and activists. These containers filled areas left open when Trump’s 450-mile border wall was built.

The Biden administration filed a lawsuit, saying the wall was trespassing on federal land as Gov. Doug Ducey did not have permission to stack the containers there, and the governor agreed to remove them.

Border Patrol agents have seen record-high numbers of crossings in recent months, which they say have overwhelmed them and towns in the area, spurring the shipping containers.