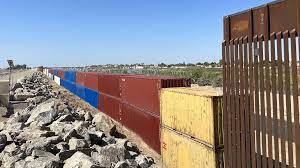 The Federal Government is interfering in the state of Arizona, demanding authorities there remove shipping containers that were placed in an area where there was a gap in the security wall that prevented illegal invaders from easily crossing into the state.

Republican candidate for Governor, Kari Lake, has promised to make securing the border her number one issue on her first day in office- so things could get very heated in the state over this news.

The federal government is demanding the state remove double-stacked shipping containers placed to fill gaps in the wall along the U.S.-Mexico border, saying they are unauthorized and violate U.S. law.

The Cocopah Indian Tribe in southwestern Arizona welcomed the call to take down the containers in the latest rift between the Biden administration and Republican-led border states over how to prevent illegal border crossings.

The Bureau of Reclamation also demanded in last week’s letter that no new containers be placed. It said the bureau wants to prevent conflicts with two federal contracts that have been awarded and two more still pending to fill border wall gaps near the Morelos Dam in the Yuma, Arizona, area.

“The unauthorized placement of those containers constitutes a violation of federal law and is a trespass against the United States,” the letter states. “That trespass is harming federal lands and resources and impeding Reclamation’s ability to perform its mission.”

There was no immediate response Monday from Republican Gov. Doug Ducey’s office, but it said in the past it would remove the containers if the U.S. government starts construction to fill the gaps.