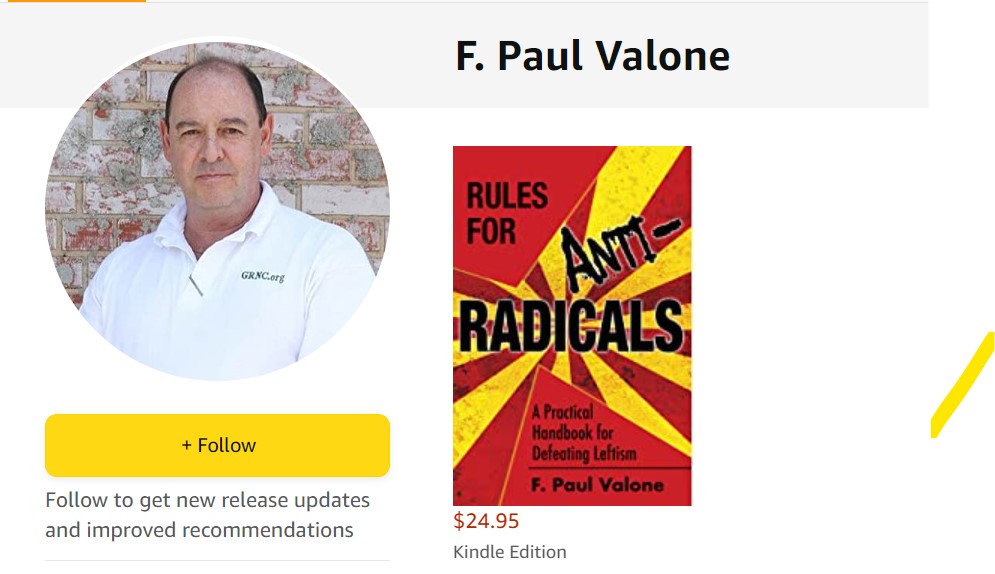 While most Americans are simply gobsmacked that our country has devolved so quickly to the level of any undeveloped third world, there are some patriotic people who have studied, with great understanding, the decades of masterful deconstruction of our beautiful Republic.

One of those people is Paul Valone, activist, and author and organizer of Grass Roots North Carolina.

“The reality is that if you don’t “do” politics, politics will “do” you. Citizens reluctant to engage in the sometimes dirty business of politics should understand that if they choose not to participate, political players will make decisions that profoundly impact their lives, generally without citizens’ best interests in mind,” Valone wrote, introducing his newest project, a book on how to defeat the left at their own game.

And as a former Community Organizer who has been on this topic for almost 25 years, I have never met someone as knowledgeable or skillful as Valone.

“Understanding that and guided by “flexible ethics” in Saul Alinsky’s Rules for Radicals, leftists have waged a multi-generational war on American culture and values. Rules for ANTI-Radicals: A Practical Handbook for Defeating Leftism draws from the author’s twenty-eight years of grassroots leadership to empower conservatives often bludgeoned into silence by the left. It is a comprehensive
a tactical guide to direct action in economic, political, legal, and non-legislative arenas essential for conservatives to defeat leftism,” Valone wrote.

In a letter to his supporters,  Valone recently wrote about his new book, Rules For The Anti-Radicals:

Over my 28 years of directing gun rights organizations, I’ve learned a thing or two about beating leftists in their quest for power and control. And I’ve come to realize that we are in a cage match for the survival of American culture and with it, not only our system of government, but our very freedom.

Last year, I tried to find a book to train other conservative activists in the tactics I found to be effective in defeating leftism and preserving mainstream American values. When I found that no such book existed, I decided to write it.

The result is Rules for ANTI-Radicals: A Practical Handbook for Defeating Leftism, and I’m happy to say it is being well received. In fact, I sent a copy to Tom Gresham, host of the nationally syndicated radio show “Gun Talk,” and he raved about it on his show, calling it “fantastic” and “an instant classic.”

You might recognize that the book’s title is a play on Saul Alinsky’s Rules for Radicals, which has been the play book for left-wing activists for 50 years. Rules for ANTI-Radicals does refine Alinsky’s tactics and bring them into the 21st Century, but my book goes far beyond Alinsky.

A practical guide for activists and mainstream Americans alike

Part I, “Boot Camp for Conservative Activists,” is directed to citizens alarmed at how American culture is being hijacked by the left, and gives them tools and tactics for dealing with “Woke” lunacy in daily life, be it in your neighborhood, your workplace, or your child’s school. It details how Marxist intellectuals infected American universities with “critical theory” in the 1930’s and how it metastasized into “critical race theory” decades later.

Part II, “Activist Tools and Tactics,” is directed at concerned citizens and neophyte activists, as well as political operatives or candidates. It describes the four types of direct action which can be used to effect change, and how to win both legislative and election battles.

Throughout the book, I give examples from GRNC’s nearly three decades of legislative victories. In the book’s foreword, NC House Representative Jay Adams says, “Paul has refined Alinsky’s methods and turned them mercilessly against the left.”

A portion of every book purchase goes to GRNC

You can find Rules for ANTI-Radicals on Amazon, of course, but if you buy it on my site, RulesForANTIRadicals.com, and use the coupon code “GRNC,” I will donate $7.00 for each book sold to GRNC. I will also autograph all books purchased through my site.

“This is a college-level class on how to fight, and taking it makes us all the more knowledgeable and prepared to win. Valone knows what he’s talking about and explains it all in a way that’s easy to follow and interesting. He supplements it throughout with graphics, charts, and appendices, making this not just an instruction manual, but an authoritative reference that activists will want to keep nearby for when the innumerable questions arise that Rules for Anti-Radicals has ready answers to.”

My hope is that Rules for ANTI-Radicals becomes the standard handbook for not only conservative political activists, but for mainstream Americans dedicated to taking back our culture. I hope you will support that effort by buying the book and by introducing it to like-minded friends and acquaintances.

Please help mainstream Americans retake our country by buying Rules for ANTI-Radicals and applying its principles to defeat leftism.

So I ordered my copy from Amazon, and called Valone up with an idea- I am going to write a series on his book and hope readers get to know him better.

I hope you will join me- in my virtual book club- and send me your comments and ideas, and I will include you in the articles. KariDonovan@Protonmail.com