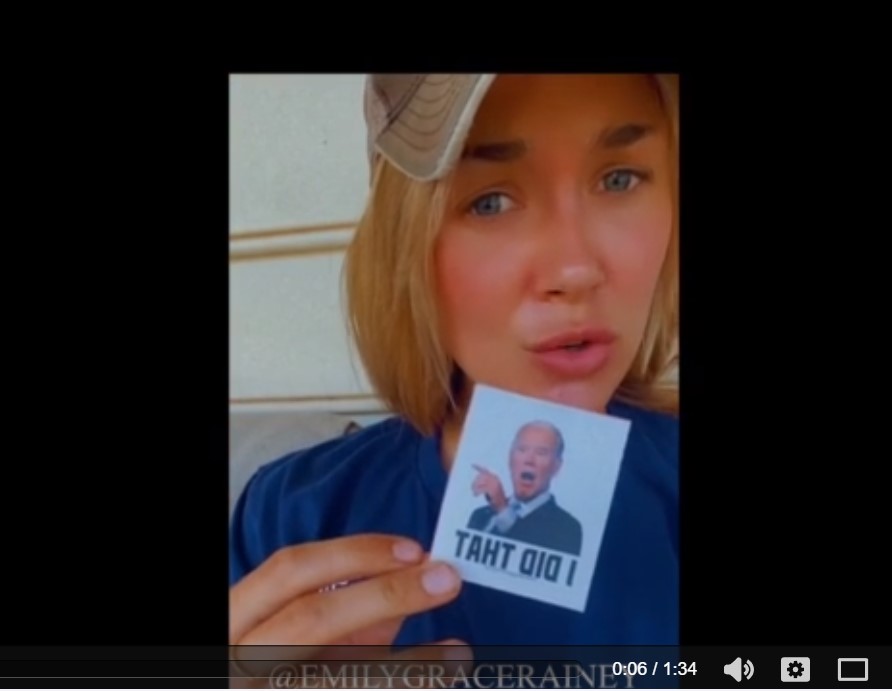 Inspiration for activism can come from interesting places. While the assault on our American traditions is painful, Conservatives activists are coming up with very creative ways to vent their frustrations and keep their good sense of humor.  Ac

cording to one professionally trained military officer, who has studied the effects of propaganda on the human mind- mocking Democrat Joe Biden is good for the heart and soul.

“What came to my mind about doing what you call -Gas Pump Activism- was my training in the military.  About how to resist the brainwashing of the enemy,” Emily Grace Rainey told me when I caught up with her to ask her about a recent video she posted.

“Gas Pump activism isn’t my main activism, I kind of laughed when you called it that, but I think it’s important. So yeah- Gas Pump activism is good.  I bought several hundred of these stickers then I posted on my Facebook page that I would send a sticker to anyone who would use them and send me a quick little video.  That night I got several hundred messages and I stayed up late into the night with my Mom and we addressed envelopes.  Then I put it all together and posted it and added a great song by Byrson Gray.  To me doing this is like SERE School, when we are taught how to resist the enemy and maintain our dignity and honor,” she said.

I looked it up.  Yes- this is what Rainey was talking about. Through our conversation, Rainey spoke about how to reignite the nobility of military service,  the honor of serving,  and how to do it with a sense of ownership over Constitutional rights.  Rainey has been a sounding board for many of her military friends during some of the very dark days of the Biden administration, where many Conservative Christians are being persecuted.

“Survival, Evasion, Resistance, and Escape (SERE) is a training program, best known by its military acronym, that prepares U.S. military personnel, U.S. Department of Defense civilians, and private military contractors to survive and “return with honor” in survival scenarios.”

“I am a big Bryson Gray fan. I added his song, Lets Go Brandon because it resonates with people. I was under a gag order for 8 months, before I got an honorable discharge from the Army.  The Army was making it impossible to stay in service after I attended D.C. on Jan. 6.  I was smeared in the international media after Josh Stein asked people to turn in North Carolina participants at the U.S. Capitol.  It was the A.P. that exposed me,  and then my career in the Army was destroyed because they wanted to call me a Domestic Terrorist,” Rainey told me.

“I am very worried about what I see Biden doing by changing the definitions of words, and by forcing people to take vaccines.  I predict that we are headed toward a purge of the military that will result in Biden using the military against the American people, and by then all of the people who would have stood up and said no, will be gone.  We have to keep our sense of pride as Americans and stand up when we can,” she said.

So ‘gas pump’ activism may be a small gesture- but it is also a powerful gesture. Rainey said she had gotten a lot of encouragement and notes for stickers.

“We have to find ways to keep our hearts and spirits lifted up with humor and we have to resist the opportunities to get downtrodden.  We know who we are, we are living free lives, and we need to retain our honor. So that is why I did the video about the stickers,” she said.

Rainey understands the struggle of being a Conservative Christian and the need to keep her head up.  Recently she was a guest on Tucker Carlson’s show to talk about her role in his documentary about Jan. 6.  Rainey, in Jan. 2020,  had filled two busloads with members of her Moore County Patriots group to Washington DC to participate in the rally for President Donald J. Trump.

And then the media got involved, like local N.C. news The Poliot who reported:

A U.S. Army Captain who lives in Moore County is at the center of an Army investigation into her participation in events surrounding last week’s protests and violent riot at the U.S. Capitol.

Emily Grace Rainey, known locally for protesting coronavirus restrictions and for her involvement with an anti-mask organization, helped lead a group of about 100 people from Moore County to Washington, D.C., on Jan. 6.

“‘I was a private citizen and doing everything right and within my rights,” she said in an interview with The Associated Press on Sunday. The Pilot was unable to reach Rainey for additional comment.

Rainey, 30, is attached to the 4th Psychological Operations Group at Fort Bragg, according to Maj. Daniel Lessard, a spokesman for 1st Special Forces Command.

“Our command is aware of Capt. Emily Rainey’s presence at the Capitol on Jan. 6 and is currently investigating to determine the facts as to her exact involvement,” Lessard said in a statement to The Pilot. “It is unclear if she violated any laws or regulations, as the (Department of Defense) encourages members of the Armed Forces to carry out the obligation of citizenship, so long as their actions are in keeping with DoD policy and do not impair the good order and discipline of the service.”

The investigation, Lessard said, will determine whether “further actions by the command are warranted,” though he did not elaborate on what actions might be taken.

“It would be inappropriate for me to speculate on the potential administrative or disciplinary actions that our command could take, as the investigation could determine such a wide range of findings,” he said.

Lessard said Rainey resigned her commission in October. Rainey had been approved for a “separation date” in April, meaning she was still considered to be on active duty when she led protestors to Washington. She was seen in Army fatigues as recently as last month when she spoke at a Moore County Board of Education meeting.

Psychological Operations Groups “use information and misinformation to shape the emotions, decision-making and actions of American adversaries,” according to The Military Times. The group’s Latin motto, “Verbum Vincent,” means “words conquer” in English.

Emily Rainey is the individual who made the "false flag" comment in the trailer for Tucker Carlson's Jan 6th series that set off the biggest reaction last night.

Watch for more stories about Rainy’s observations about Jan. 6 from the U.S. Capitol.