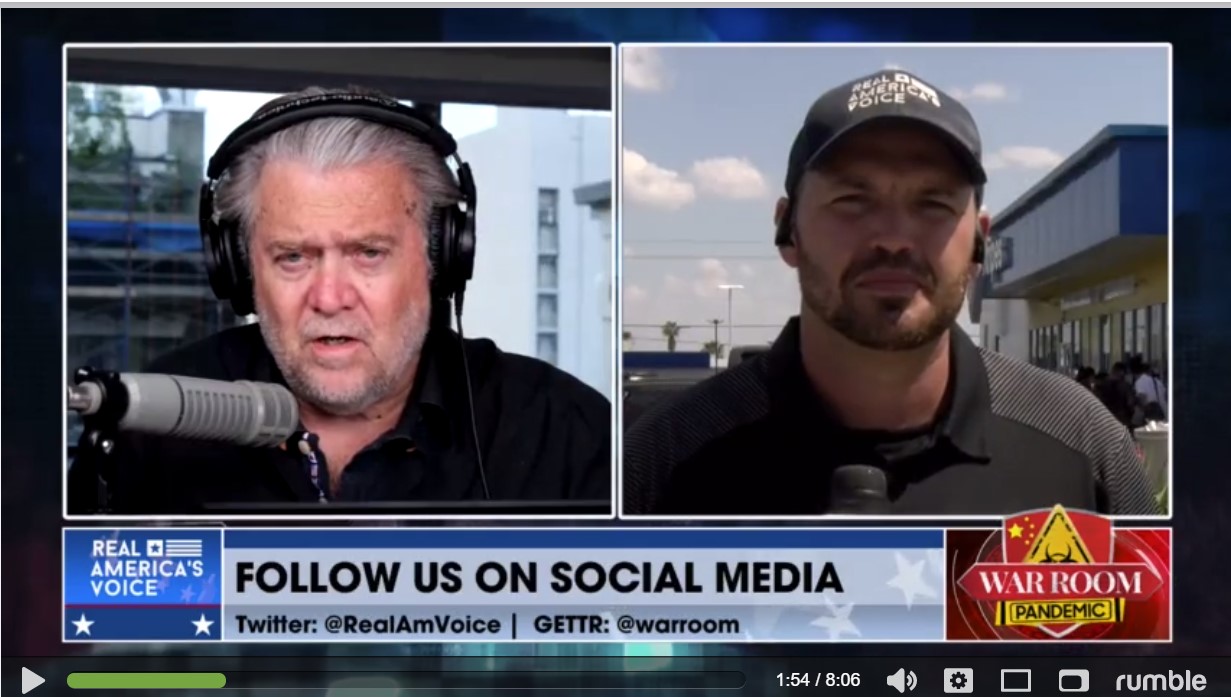 Ben Berguam, the lead investigative reporter for Real Americas Voice, spoke with Steve Bannon live from the Southern Border in Del Rio, Texas, and made several statements that all of the media would cover if they were trying to serve the American public.

“Exactly. The hotels here are filled with law enforcement but I have not seen them stop anyone. Frank Lopez Jr. who has 30 years on the border patrol told me the same. He said words are not going to fix the problem. There are things that Gov. Abbott could to do cause pain to Mexico, like President Trump did. Abbott has a number of things he could do to try to stop this crisis and slow it down, but he isn’t.” Bergquam told Bannon.

Here is what Berquam uncovered in his reporting to Bannon:

“There are groups here pretending they are humanitarians, and the same NGOs that Governor Abbott tried to block from smuggling around the state are now coming here- supposedly- voluntarily and picking them up to take them to hotels around the country. So I have two questions for Abbott, One, the bus that is picking people up here breaking any of the Executive Order and, if so, are they going to be making any arrests against Grayhound?’ Berquam said to Bannon.

2 . Governor Abbott is aware of Human Smuggling and not doing anything to stop it from going into the country from his borders. [1:39]

“Now we have NGOs coming here picking them up, and this is just part of what is undermining this country. This is just one small place that they are picking people up. We have confirmed they are taking people to Laughlin Air Force Base and then the people are flown out. So they are using our tax dollars and our military to advance human smuggling around our country.

3. There has been no law enforcement or health checks on illegal who are doing the border crossing [2:42]:

“There is a lot of law enforcement here, including the Texas Rangers, but no one is stopping to ask anyone questions, and nothing is being done to stop COVID coming in; in fact, we are bringing more COVID in,” Bergquam said.

“I interviewed some people right after they have crossed, and they told me they are not being screened for health problems, including screening for other diseases that American has eradicated. That is why we have an immigration process in the first place, and none of that is being done,” Berquam said.

Watch the rest of the interview, and please share to help Ben Berquam get his courageous reporting out to the country.