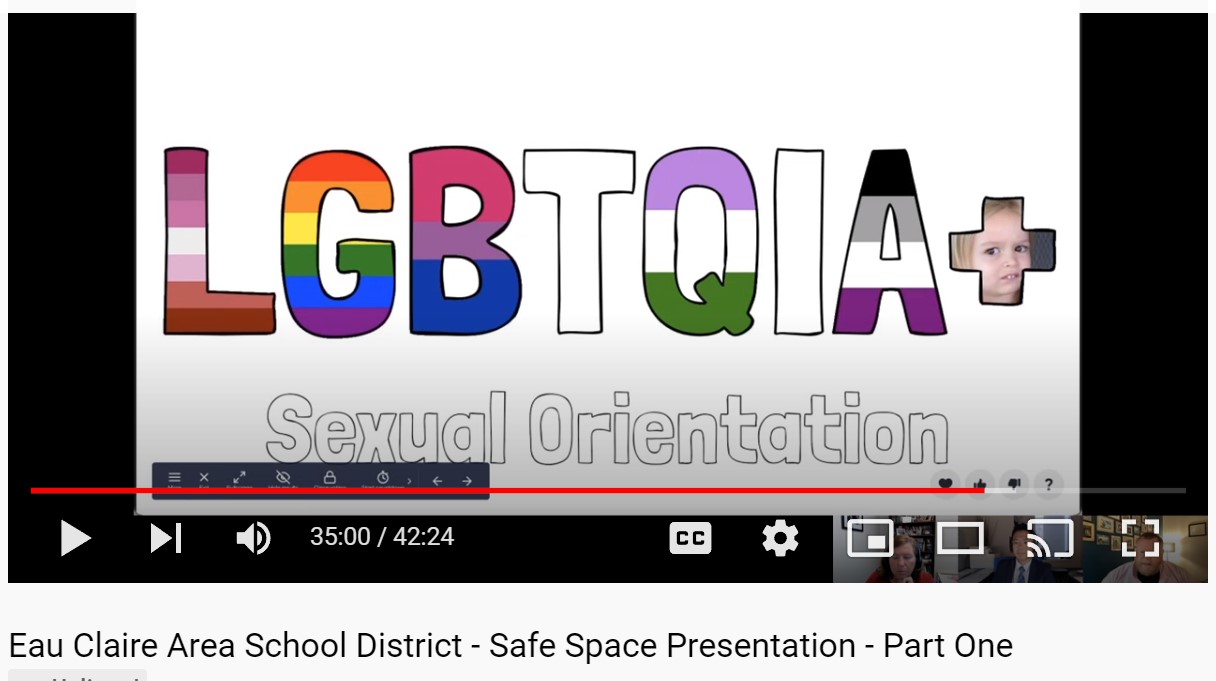 A public school district recently held a mandatory staff development day where teachers were told, “Parents are not entitled to know their kids’ Gender identities. That knowledge must be earned,” in what was promoted as creating a “safe place” for the Power of [And], whatever that means.

The directive in the training,  undermining parental authority was given to teachers in the Eau Claire Area School District (ECASD) in a training developed by the University of Wisconsin Eau Claire from the Gender and Sexuality Resource Center.

The stated purpose was just for the college to introduce themselves to teachers, and offer assistance to the educators should anyone need the Gender and Sexuality Resource Center’s assistance, the moderator said in his opening statement.

And parents were furious when they found out- according to a statement published by Empower Wisconsin (EW), which included a copy of a slide from the presentation urging teachers and staff to hide critical information from parents.

In the statement from Empower Wisconsin, the group exposed the dark underbelly of the type of access that non-profits and other third parties have to push problematic lessons on teachers of minor school-aged children, which appears to groom the children for alternative sexual expressions.

Why is a resource center about adult sex at a State University reaching out to teachers of minors who can not legally have sex- to tell them about numerous options they have for expressing their sexual preferences?

EW’s full release is below:

It has been brought to our attention that content included direction to teachers that “…parents are not entitled to know their kids’ identities. That knowledge must be earned.” We are appalled that ECASD would display such blatant disregard for the parents and guardians of our community’s children.

We are equally dismayed that current school district leadership would pressure teachers into breaking a social contract that we all know and understand—that parents and guardians hold primary responsibility and decision-making for the welfare and care of their children.

This blatant disregard for parental rights and responsibilities that has been allowed to creep into our schools under current board leadership is communicating three very dangerous messages to parents and the wider community:

1.) Schools are in control of children, not parents and families—When you entrust your
child into the walls of ECASD, you no longer have the right as a parent to be informed of
major developments in your child’s school life. In fact, you must “earn it”.

2.) Current Leadership is willing to pit teachers against parents—Open communication
between the classroom and home has always been critical to healthy school
communities and student development. ECASD is putting teachers in a difficult and
dishonest position by instructing them to actively withhold information from parents.

3.) What goes on in the walls of ECASD is privileged information—By indicating that
information about your child is “knowledge that must be earned”, ECASD is setting a
dangerous precedent. If identity questions for your child can be hidden from you, is diet,
curriculum, healthcare, inappropriate relationships, mental health concerns, etc. also no
longer the business of parents? Just what are parents and guardians allowed to know
and when?
As your school board candidates, we want to reassure teachers, parents and the wider
community that:
1.) We view parents and guardians as critical partners and primary decision makers across
all areas of academic and school life.
2.) We will always advocate for transparency and two-way communication.
3.) We will unite our community—families, students, teachers, and citizens around the
common goal of restoring learning excellence by fostering a culture of unlimited
potential for all students and staff.
And as fellow parents, we demand that ECASD leadership issue an apology to teachers for
placing them at odds with families and also to parents and guardians for breaking the trust
and partnership that is critical for thriving students and a stellar school district.

Defending Red reported on the  Wisconsin school district and posted a video of confusing training:

The hosts praised states that mandate schools to teach LGBTQ topics in classrooms from kindergarten through high school while condemning the majority of states that don’t. [Time Stamp: 9:50] The hosts then push for “sexual orientation” and “gender identity” to be taught in schools. The hosts also had participants discuss teachers gaining trust with “LGBTQ+ youth.” [Time Stamp: 17:20] The topic’s slide in the presentation stated: “That said, teachers often find themselves in positions of trust with LGBTQ+ youth, because they cannot seek solace and support from their parents (see Minority Stress Theory). How might you strategize the support of your LGBTQ+ students, without the support of their parents?” One host called parents disagreeing with their children on LGBTQ issues “abuse”:

We understand and acknowledge that teachers are often put in terrible positions caught between parents and their students. But much like we wouldn’t act as stand-ins for abuse in other circumstances, we cannot let parents’ rejection of their children guide teachers’ reactions and actions and advocacy for our students. [Time Stamp: 18:23]

The hosts also discussed “pronouns” in the presentation. [Time Stamp: 25:45] The hosts then played a video that stated calling someone the wrong pronoun is “misgendering.” The hosts also encouraged participants to “integrate pronouns” into their “email signatures,” “nametags,” “business cards,” “syllabus language,” “office forms,” “meeting/class introductions,” and “website/program bios.” [Time Stamp: 31:40] The slide in the presentation also stated that “it is particularly important for cisgender people to engage inclusive pronoun use.”

You’re eating lunch in the staff lounge. A group of teachers are chit-chatting about students, and you overhear one of your colleagues saying, “Get this. Simone just came to me after class and told me she’s now going by Simon. She’s using male pronouns, and her parents are apparently okay with it. I mean, they may be supportive, but it’s my classroom. I’m not about to confuse the entire class. They’re kids, for crying out loud.” How do you respond?

Something similar was uncovered in Wake Co. North Carolina, where a PTA group instructed a parent to advocate and be a good aly to go around parents’ wishes and helped elementary school children – who want to change their gender-  by getting materials of some sort from the resource center librarian.