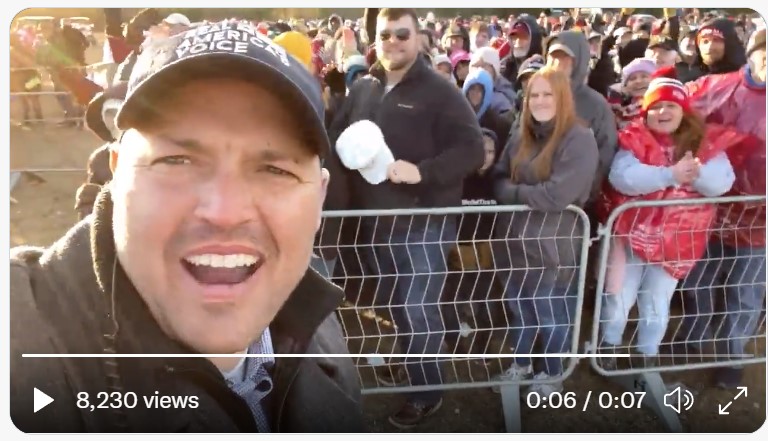 When Real Americas Voice reporter, Ben Bergquam, tells Americans to stand up and get involved in activism and the political process, that message comes from a place of great personal struggle and achievement from a former activist.

“The best is yet to come, but it is up to you,” Ben told audiences recently in South Carolina. The South Carolina rally to save America had another massive attendance for the America First movement.

Bergquam’s consistent message to is Americans is “stand up and get involved!” because that is what he did as he struggled with substance abuse- and assault by the left- to get to the place where hundreds of thousands of people recognize him as a hopeful voice of about the future of America.

Bergquam is widely recognized at Trump rallies all over the country, for his enthusiastic and high-energy coverage of the crowd, and his insightful interviews.

Ben connects with people from top newsmakers and lawmakers, to the citizen activist because he places importance on each person’s role in the government system that is being created for the benefit of the whole country.

Ben knows the heart of a regular American- because, even though he appears to be a highly polished reporter- he is one of us. He has overcome many of the same struggles we have had.

Here he is at a rally for President Donald J. Trump in Florence, South Carolina, yesterday:

“Stand up America!” Ben is heard saying to the crowd – who loves him:

Bergquam, an expert on the Democrat-led crisis Southern Border, talked to a Navy vet about how Biden is handling the ongoing crisis at the border- and now- the situation with Russia:

The independent media is leaving the coverage of what Americans really care about- with more exclusive footage of the rally than the lapdog media shows. The mainstream media does not want people to see from Real Americas Voice and Ben Bergquam:

FIGHTING FOR FREEDOM AND HAVING FUN

Ben is married and has two beautiful young daughters. His work is motivated by his love of them and for the country. And people recognize his contributions, which is why Ben was invited to be involved with other media projects- like this one recently with General Michael Flynn. Roger Stone and others at their event at CPAC:

But how he got to that point was not easy..as he shared here- Ben had to go through a lot to get to this point. And his advice to other activists is to accept that it is a hard job.

It is hard work that is worth the price he paid, and he hopes his readers and audiences will also pay the price.

“We have one country, and we have to fight for it toegher, ” Ben said recently.

Here are some recent photos of Ben in Florida at a CPAC event for the America Project. He was asked to be a part of, so from substance abuse to activist to a popular investigative reporter, he overcame. That is the American dream.