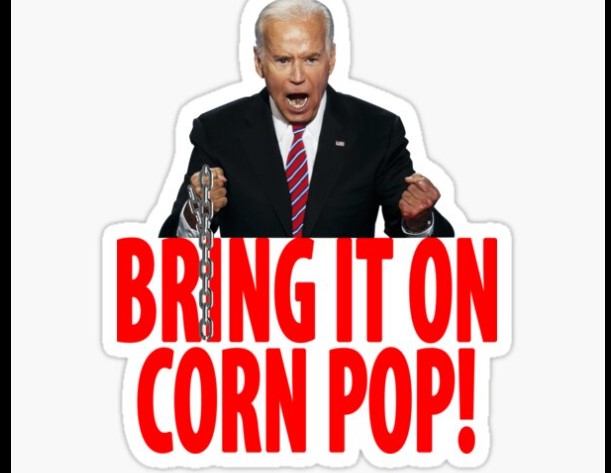 Democrat Joe Biden, who ran for President as the coolest ally for Black America on the planet- won in 2020 primarily because of his support from Black American voters.  But Democrats have done nothing at all that they promised to do- they never have.

All Biden has done is make up the most ridiculous stories that show ultimately that he is completely out of touch with the Black Community. Exhibit A: The Corn Pop ‘Was a Bad Dude’ Story.

THIS is who they voted to lead the country…

So this anticipated betrayal of their voting power is not a surprise.

Democrats have ruined the Black Community for 5 decades that Biden has been in power… but things may be changing for the voting segment.

“Black staffers leaving the White House in such large numbers they gave it the nickname: “Blaxit.” We KEEP trying to tell people the Democrats are NOT allies. They only USED black people to get them back into office. What’s it gonna take?” Real Vinne James posted on Twitter.

BET reported on the hot mess that is Biden:

Upon assuming his tenure as president, Joe Biden promised that his staff would reflect the diversity of the nation and he did open the doors for people of all backgrounds to come in, but those doors for some have swung both ways. According to a new report, what some are claiming is normal and expected staff turnover as 20 Black staffers leave their White House jobs, others have dubbed the departure “Blaxit.”

In a report published by Politico, nine current and former White House staffers shared in interviews that despite some employees leaving on good terms and for family and other personal reasons, there is a climate that some other Black employees find discouraging.

The news website quoted an unnamed staffer as saying, “They brought in a ton of black people generally to start without ever establishing an infrastructure to retain them or help them be successful. If there is no clear infrastructure of how to be successful, you become just as invisible in this space than you would be if you were not in it.” `

Some “people have not had the best experiences and a lot of that has to do with the dearth of black leadership,” a former official agreed. “Think about any workplace. Black folks need some person to go to, to strategize and be a mentor, and we just don’t have as many folks who can be mentors to us.”

It is not uncommon that as the first year of an administration concludes, staff tends to depart. This administration seems to be in keeping with that tradition. The White House has seen several departures across all its staff, and former press secretary Jen Psaki, left her post to join MSNBC, where she’ll join Symone Sanders who left Vice President Kamala Harris’ staff to host a weekend show on MSNBC earlier this year.

“This is a normal time for turnover across the board in any administration and black staff have been promoted at a higher rate than staff who are not diverse,” White House Press Secretary Karine Jean-Pierre — the first Black woman and LGBTQ person in the position, told Politico.

The reality of low salaries in a city as expensive as Washington, D.C., can’t be ignored as well. White House staff salaries start around $48,000 and the highest paid employees earn in the neighborhood of $180,000. The current administration has also made strides to close the gender pay gap that’s existed in prior White House staff pay rates. Women comprise about 60 percent of the Biden White House appointees and about 56% of his senior staff.

Biden came into office pledging that the staff of the White House would look like the population of the country that elected him. At this halfway point in his administration, that promise seems to be a work in progress.

But with the departure of Richmond, someone many of the Black staffers looked up to, according to Politico, a gap has been left.

But Richmond told Politico that the White House had given great opportunities to Black staffers and that many were simply leaving for other jobs with more pay.

“A lot of people have been at this grind [for a while] and it’s a hard grind,” Richmond said. “[So] a slowing down of the work pace and a better salary becomes more attractive. For young African American staffers who can make these types of salaries, it doesn’t just change their plight but their family’s plight.”

This is not good for Biden.