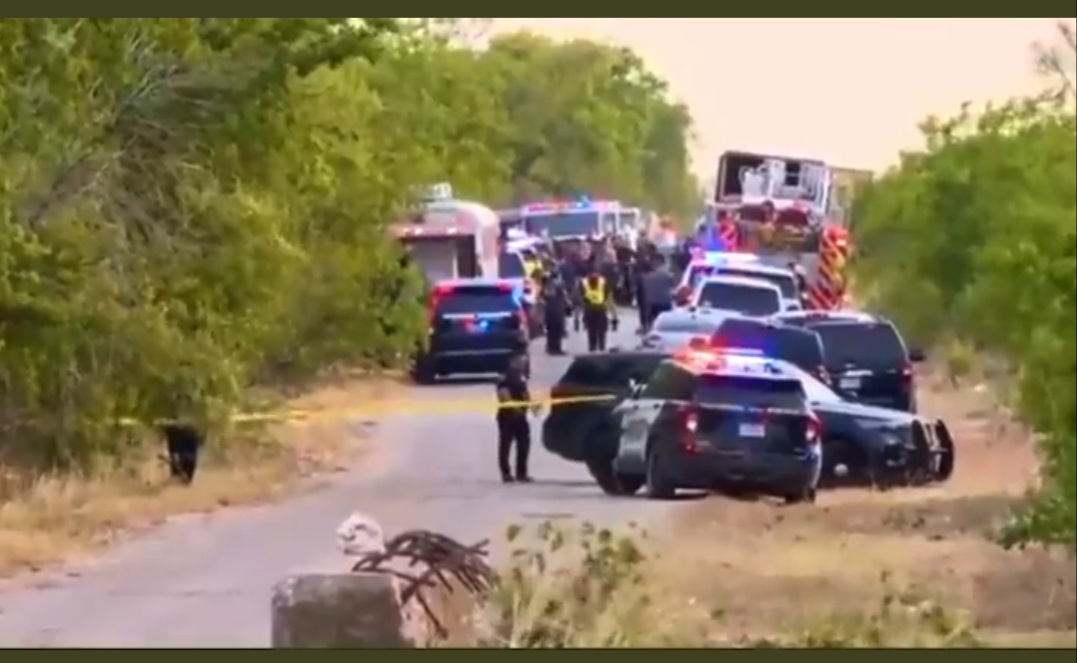 The number of dead was updated on Wednesday.

Dead Migrants most likely paid Mexican drug cartels, with the permission of Democrat Joe Biden administration, to take to them to their death, and that is something that makes the massive death toll even more painful.

“Breaking Update from News 4 San Antonio, as of 8:20 p.m., about 46 Illegal migrants are dead, according to Archbishop Gustavo,” Bergquam posted.

Footage of the scene:

“multiple illegals found dead in a semi-trailer outside of San Antonio, TX. #BidensBorderInvasion – enriching the cartels and destroying lives along the way!” Bergquam posted.

“Possibly. 6:00 this evening, the San Antonio fire department, responded to 9600 Cantana Road for a report of a dead person.

Engine 52 arrived and found the trailer is cheap McManus mentioned with a body outside and several that they could visibly see inside.

Once the doors were open at this time, we processed approximately 46, bodies that have been triaged and tag,ged and declared deceased at this time.

Fortunately, we were able to transport 16 people out, 12 of those were adults, the others were Pediatric, all of them were conscious at the time of on Transportation.

The patients that we saw were hot to the touch, they were suffering from heat stroke. Heat exhaustion, no signs of water in the vehicle. That was a refrigerated tractor-trailer but there was no visible working. AC unit on that rig, we are currently putting those 60 members through the critical incident, and stress debriefing.

Again, we’re not supposed to open up a truck and sea stacks of bodies in there. None of us come to work imagining that. So we’re working through the behavioral health for our folks right now,” Charles Hood, San Antonio Fire Chief told reporters.

“So the first call came in at about 10 minutes to 6:00 this afternoon. Fire a worker who is Works in one of the buildings up here behind me. Heard a cry for help came out to investigate. Found a trailer with the doors, partially open. Open a month to take a look and found a number of Deceased individuals inside. So,  We have three people in custody. You don’t know if they are absolutely connected to this or not. This investigation has been turned over to HSI. It is now a federal investigation,” Chief of Police for San Antiono William McManus told the media.

“So the plight of migrants seeking Refuge is always a humanitarian crisis but tonight we are dealing with a horrific human tragedy. So I would urge you all to think compassionately and pray for the deceased.  The ailing. The families.

And we hope that those responsible, For putting these people in such Humane conditions are prosecuted to the fullest extent of the law,” Ron Nurenberg, the Mayor of San Antino told media.