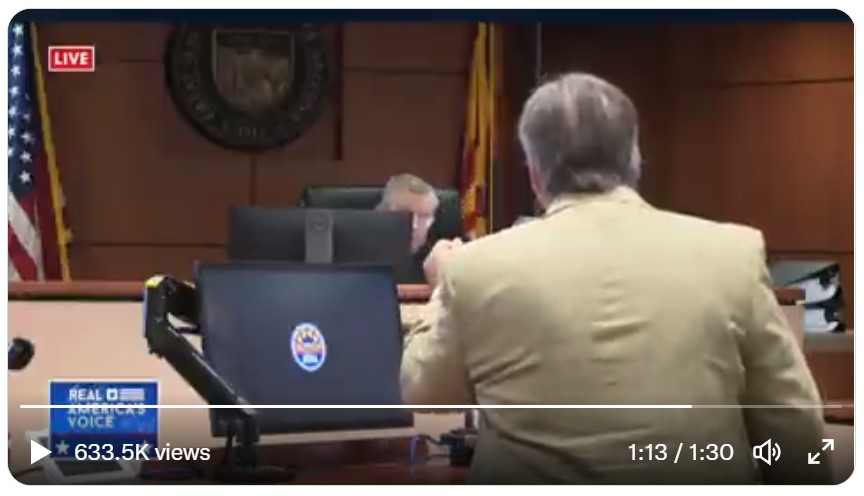 It appears that the ruling from ‘Justice’ AZ Peter A. Thompson in the hearing for Kari Lake’s Lawsuit against election officials in AZ is that- well, the workers were doing the best they could, and he agreed with the State’s closing position that the chaos was the people’s fault for voting on election day.

The contempt the State’s attorneys had for the concerns of the people over the actions of their election officials was dastardly.

The judge is basically saying there is no legal remedy for stealing elections.

“Not surprisingly the, the judge ruled against Kari. It was the easy way out for him. We need to appeal and include the signature verification. The more we get these guys on the stand, the more we catch them in their lies,” Ben Bergquam, a correspondent for Frontline America, said about the ruling on Saturday.

“The Order permitted two counts to proceed to Trial: 1) the claim that ballot-on-demand (“BOD”) printer malfunctions experienced on Election Day were caused intentionally and that these malfunctions resulted in a changed outcome (Count II); and 2) the claim that Maricopa County violated its own election procedures manual (“EPM”) as to the chain of custody procedures in such a way as to result in a changed election outcome (Count IV). As outlined in the Order partially
granting the Motion to Dismiss, there are four elements to each claim. Plaintiff needed to prove by clear and convincing evidence, each element to be entitled to relief:

It bears mentioning that because of the requested remedy – setting aside the result of the election – the question that is before the Court is of monumental importance to every voter. The margin of victory as reported by the official canvass is 17,117 votes – beyond the scope of a statutorily required recount. A court setting such a margin aside, as far as the Court is able to determine, has never been done in the history of the United States.

This challenge also comes after
a hotly contested gubernatorial race and an ongoing tumult over election procedures and legitimacy – a far less uncommon occurrence in this country. See e.g., Hunt, supra.

This Court acknowledges the anger and frustration of voters who were subjected to inconvenience and confusion at voter centers as technical problems arose during the 2022 General Election.

But this Court’s duty is not solely to incline an ear to public outcry. It is to subject Plaintiff’s claims and Defendants’ actions to the light of the courtroom and scrutiny of the law.

“It bears mentioning that election workers themselves were attested to by both Plaintiff’s
witnesses and the Defendants’ witnesses as being dedicated to performing their role with integrity.
Not perfectly, as no system on this earth is perfect, but more than sufficient to comply with the
law and conduct a valid election.”