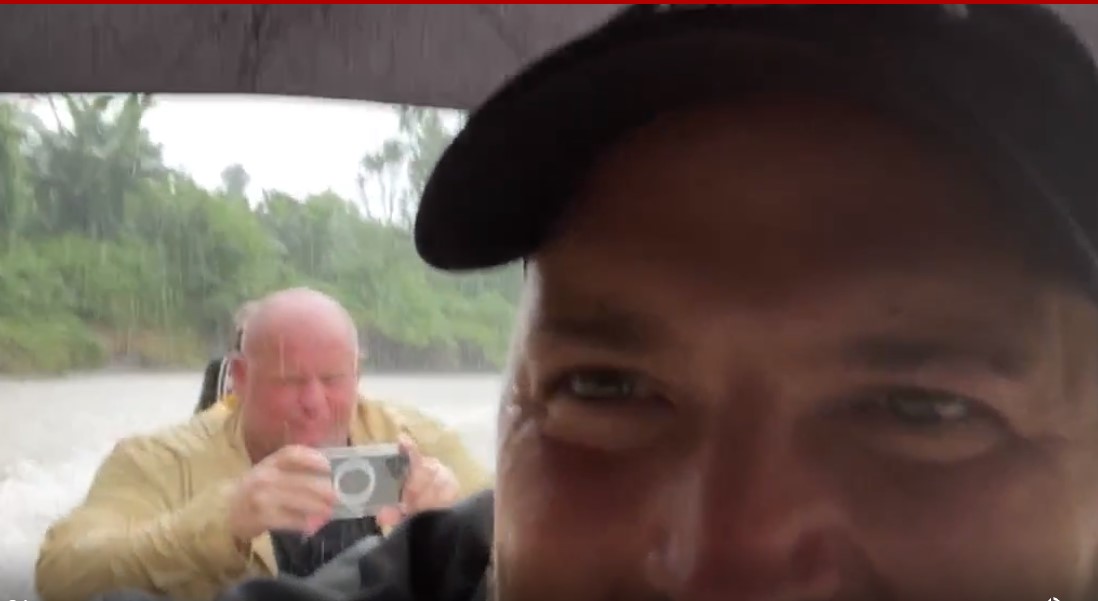 Ben Berquam, the host of Law and Border on Real America’s Voice released episode 4 of his investigative reporting on the Southern border of the United States with Mexico.

In episode 4, Michael Yon, a war correspondent, makes the point that the large majority of people who are fleeing to the US are not coming from war-torn countries- as we usually think of as the plight of the migrant.

“If you throw corn on the ground, the ducks will come, ” Yon said- explaining that many people are coming to the US for the free things being promised to them by the Biden administration.

What Bergquam and his crew uncovered gives viewers a ‘bird’s eye view’ of the escalation of the invasion that is happening there and how US, under Democrat Joe Biden, are playing the bad guys by dragging poor people of the world through fragile communities, to get to our open borders.

ANNOUNCER: On this episode of Law & Order, then Burke travels to the border of North and South America to the notorious Darien Gap and joins Michael Yon to explore areas where reporters have not ever gone.

They will see firsthand what’s really happening and who’s to blame for an UN-run camp where us Homeland Security secretary Mayorkas visits to provide more US tax dollars to support the invasion to the Jungle Villages that are being overrun.

BERGQUAM: This is happening in Panama- so that they can bring the people through Costa Rica and the rest of Central America to Mexico and then on to our to the border.

We see large numbers of people from Africa when were asking the people on the boats as they go by, where they’re from. We get Cuba, Venezuela, but then you get looks from people who are bewildered. They don’t speak Spanish. So, you know, a lot of them are coming from all around the world.

Open Borders leftist or acting like they’re Noble and that they’re compassionate and all they’re doing in. These are the same people that say that we all need to live like the indigenous people, as they’re destroying the indigenous land, There are supporting this Invasion that’s coming right through here and destroying some of the most beautiful rainforest jungle that you’ll find in the world. They are hypocrites and liars. That’s all they are and they won’t show you what’s actually

The people walk by and identify to Ben where they are from: “Ghana, Senegal, Pakistan, Bangladesh, Bangladesh Afghanistan,” they said.

You can see the boats down here. So they’re actually using the boats that they use for their own markets. And then those all the life vests- the crazy thing about this is now you have the villages that are fighting about it because they’re getting $25 per person to take them to this point versus small amount of money, they’re getting for moving the avocados and plantain. So the boat drivers are loving it but it’s also just trash in their communities and trash in the culture as they go.

So it’s just a tough situation and it’s only getting worse. The way all these guys were talking, they all know title. 42 is going away. Biden has invited the open borders and they’re coming out every single one of them. We’ve talked to most of them, other than the guys coming out of Afghanistan, most of them have been in a safe country for three, four, five, six years.

Brazil, and Chile. We’re going to see millions- millions coming if something doesn’t change at this point.

ANNOUNCER: Ben and his team have witnessed hundreds of migrants being loaded up and sent off to a un facility said the first truck leave next trucks coming down, it’s going to take a few loads to get him out of here. This is happening every single day.

BERGQUAM: At this one little Port portal Iman and Panama basically on this is The Edge that right there is the Darien Gap. All of that back. There is really no man’s land. So that first truck just left heading to the shelter here where they’re basically going to process them and get them through Panama as fast as they can. It’s the controlled flow and that’s what they’re working on. Is just sending them as fast as they possibly can getting them out of the country so that it’s not Panama’s problem. Same to Costa, Rica and then, get them out, get them out, get them out because they see the damage the environmental damage this is doing.

We’re about a mile away from the highway one that starts here in Panama actually ends in Panama, there’s no road to South America. Lot of people don’t know that. That road is a corridor, all the way up goes all the way to Canada. That is where they’re coming and ultimately, they’re going to spread throughout the US and there’s no end in sight. And if anything, what Joe Biden, the Democrats in Washington, DC. are, doing are incentivizing more of this and talking to these people, what they’re going through as they come on this journey, through robberies, the extortions, the rapes, the murders, it’s just evil, it’s pure evil and that’s what the left is inviting.

ANNOUNCER: Remember this is all at the taxpayers expense. He’s a former Green Beret and a military war correspondent.

MICHAEL YON: They’re invading our country right here. These migrants are just doing what we would do in their situation. We’re giving away free stuff and they want to come. Most of the countries they’re coming fro. I’ve been to and guess what? They’re not wars there. Yes, they have reasons to run but most of the others don’t if you throw corn on the ground, the Ducks will come.

We’ve got to do something about this. We are under demographic attack, some fish just do not mix. Well in the same aquarium, more than half of my life overseas and more than 80 countries. So, obviously I’m quite comfortable with foreign cultures. That’s one of the things that you don’t talk about but the impacts the cultural impacts that are coming in. We’re talking about people that are coming from very corrupt countries that are used to basically committing fraud or crime to survive and we are importing that into our country. That’s why we have an assimilation process because there’s a process to become an American, many countries around the world don’t have the same expectation standards that we used to have. We’re losing those in America but we that’s why that’s The biggest fights we have right now.

They’re on their way, all brought to you by Joe Biden and the Democrats.

We’re losing those in America but we that’s why that’s The biggest fights we have right now.

BERGQUAM: They’re on their way, all brought to you by Joe Biden. The Democrats coming up next on Law and border the buses. Leave the UN shelters and head north as more boats, filled with migrants from all over the world.

Continue up the tributaries towards America. Crazy, crazy. Crazy crazy

See the rest of the segments:

Coming up next on Law and Border the buses. Leave the UN shelters and head north as more boats, filled with migrants from all over the world. Continue up the tributaries towards America: