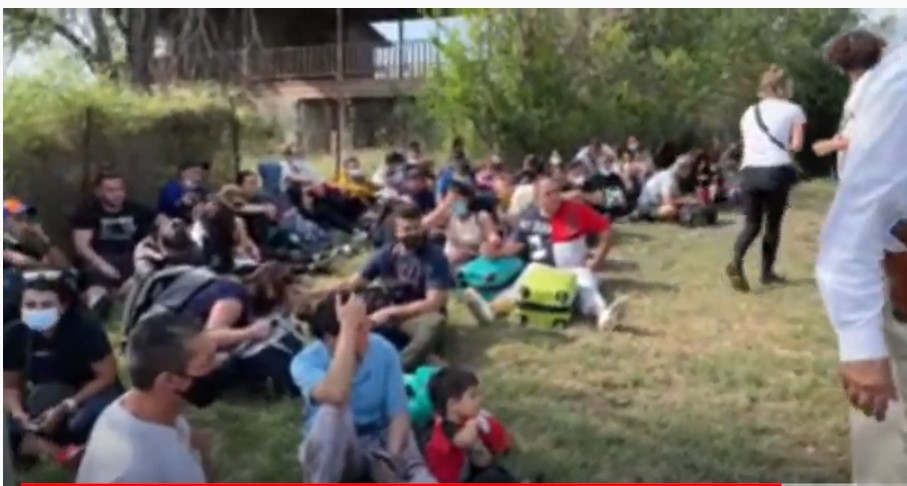 Ben Bergquam is the founder of Frontline America, a frequent guest on Steve Bannon’s War Room, and a reporter for Real America’s Voice. Ben was on the Southern border of the United States in Del Rio Texas with a group of journalists and recorded his eyewitness account of what appears to be turning into an invasion of our country.

“Live from Del Rio Texas where the invasion continues,” Bergquam wrote. “Look at the Coyottees on the top of the moutain tops watching us.”

Ben Bergquam joined a group of other journalists who uncovered a spot being used as a dumping ground on private property, where they found brand new shoes, clothing, and a wallet, and a purse.

“If they were so poor, why would they leave so many expensive belongings and even their money?” Bergquam asked.

While discussing the garbage left on the ground, the group moved quickly to cover a large group of illegals who were walking through the Rio Grande River.

“Brought to you by Joe Biden and the Democrats,” Bergquam said about the mass of people walking into the United States and being given aid by the local police.

“The Police know it is coming, and there is nithing they can do about it, it is just like shift change,” Bergquam said. “They are leaving Socialism to get to America and this is Biden’s America. Taxpayers are paying for this. This group that is here from Venezuela , and yet that is what Democrats are trying to create. Joe Biden says we don’t have a problem,” he said.

Watch the group’s reaction when asked if they want socialism. In the video an elderly woman is tossed around agressivly by a man who carried her frail body to American shores.

Independent journalists like Ben, who bring you great informative and inspirational footage you will get nowhere else- like THIS: