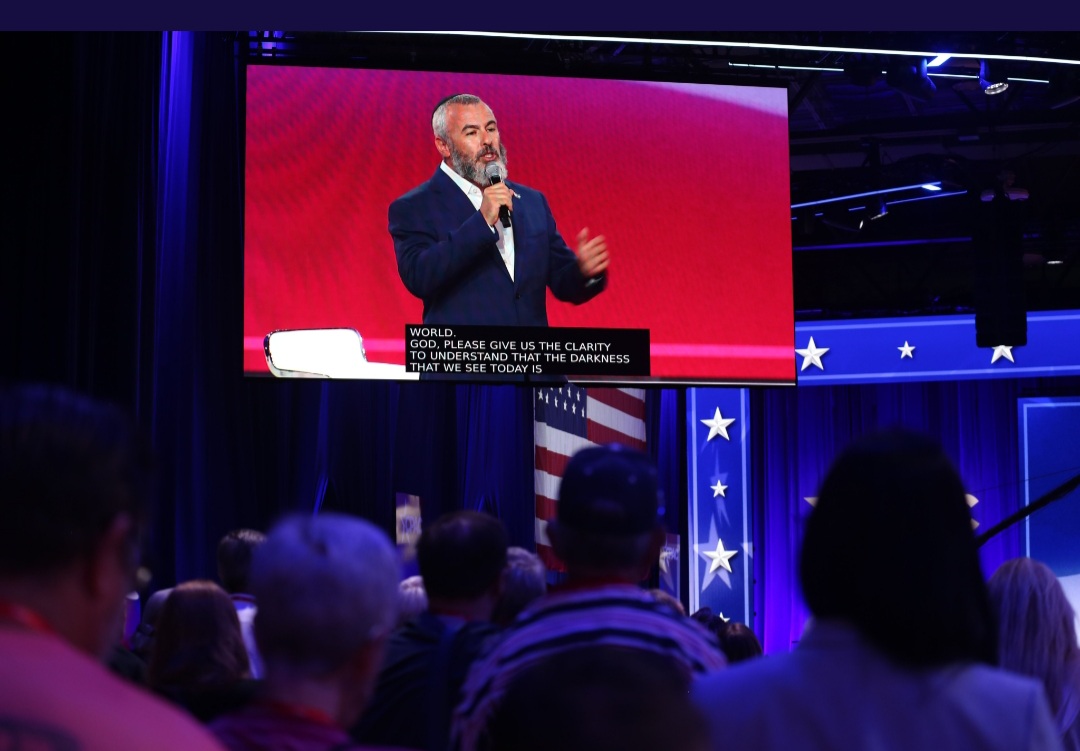 CPAC Texas in Dallas is in the books, and there are some fascinating takeaways from this year’s event that are going to be good news to the supporters of America First policies. The theme of the three-day event was that the left has gone too far, and attendees feel a spiritual battle for the hearts and souls of America that they passionately love.

THE ALPHA- THE BEGINNING

The first day was kicked off with an invocation by Rabbi Yishai Fleischer from Hebron, Israel, and he shared a copy of his prayer with me for our readers.

You know that great forces are pulling at us.

On the one hand, like in the era before the flood, the borders between right and wrong, between proper and perverse, are being erased. Our children are targeted by an endless barrage of depraved messaging that purposefully confuses them about what a faith-based life and a healthy family look like – and it sets them on a self-destructive path.

Biblical illiteracy is rampant – even worse, many don’t know why they should care in the first place.

China and Russia, countries of dubious morality, are filling the vacuum of an America that is morally ambivalent.

And like in the generation of the flood, when moral relativism reigns, society begins to devalue human life and therefore, violent crime grows, including theft and murder.

But on the other hand, God, there are many points of light and positive signs.

Miraculously, we meet young people every day who are rebelling against the Godlessness and are asking for a moral compass and are seeking a meaningful life.

This gathering itself CPAC in Dallas is filled is a bastion of hope and faith for millions.

Moreover, the rebirth of Israel tells us the you God are in process of revelation and are fulfilling your ancient promise to Abraham and King David – to ingather the exiles and rebuild Jerusalem.

God, you have given us the merit to live in a generation of of wealth, of health, and, most of all, of knowledge. Help us be grateful for these gifts and use them to fight against the haughty forces of darkness who wish to enslave us with their and manufactured fears and experimental morality.

Help us God be us be a force that shares a sense of life’s higher calling, that takes the material blessings and makes them a vessel for purpose.

God, May we be force that exudes gratitude, kindness, and a subtle sense of humor that comes from knowing that it is God who runs the world.

God, Give us the clarity to understand that darkness that we see today is merely a counter force to the GREAT LIGHT that is coming down.

As the King David says in Pslam 36; For within You is the source of life, through Your light we shall see light.

And finally Lord, may that effort yield the rebuilding of God’s temple in Jerusalem and the building of an home of God in this great country and in each one of our hearts.

THE END- THE OMEGA

And the event ended with President Donald J. Trump.

“We are done with the sick sinister abuse,” Donald J. Trump said at CPAC.”We didn’t know that the Deep State was so deep.

Trump’s biggest applause was when he said, “we need to liberate American kids from the Marxist indoctrination they are getting in schools and demolish the Department of Education.”

CPAC Dallas is growing, according to attendees from CPAC Dallas 2021. This year it was a full house for Saturday with people wanting to participate in Steve Bannon’s War Room and to hear from all of the speakers. According to organizers, they had to turn people away who wanted to hear from President Trump, and the crowd was very enthusiastic about his speech on Saturday evening.

Watch the War Room with the rest of CPAC Texas on Real America’s Voice AP.

Emerging as leaders of the MAGA movement are Steve Bannon’s War Room followers. They enthusiastically cheered Bannon and his guest during every War Room appearance of the three days when Bannon broadcast from the hotel. Sometimes they were so loud for Bannon that we could hear them all the way down the hall and in the Media pit. People were so fired up for the Real America’s Voice show that is on M-S 10 AM-12 and M-F at 5:00 PM eastern .

Definitely, the closing theme of Trump’s speech at CPAC Texas, as he took his supporters from the darkness of the left’s plans for America; laying out corruption, theft, and intimidation- to the beautiful light of the American renewal without the left’s plans talking about restoring American liberty, was like the lyrics of his final song for the night, “Hold on I’m Coming. ”

Trump has been using the song for a while to combat who US Rep. Lauren Boebert from Colorado calls “Geriatric Joe” Biden.

I enjoyed it#GodBlessAmerica 🇺🇸
I enjoyed the fact that President Donald Trump chose the song,
Hold on – Im comin' as his final song of the evening.

I get the terrible feeling that the United States is a race car on the race track going full speed with no driver with Joe Biden.

According to the Genius- the Sam and Dave lyrics show the song is perfect for Trump to his supporters:

Something exciting this year was a new media company, Americano Media, and they had a fascinating staw poll of Hispanics.

And the general straw poll was even more positive for Trump as he announced a 99% approval rating.

Results paint a clear picture, President Trump continues to dominate, regardless of the wishful thinking of the fake news and pundit class. pic.twitter.com/DR123zoo2f

Trump said he was coming for the left, and the left is freaking out over it already.

"We could end up in WW3 because we are being governed by incompetent people." – said President Donald J. Trump.

Notice the former head of the GOP, RINO must be very, very upset that CPAC no longer included his brand of RINO- leftism and selling out America for a few gold coins”:

We figured out who the problem is in America- it is the Republicans who have been holding us back and that is the message of the new and improved CPAC. Trump is going to get them as well.

Consider this- what is the crazy word salad from Steele about? What is he trying to say? Why would he retweet this?  No one understands the RINOS at all. They are also on the run.

Trump had better watch his back. Desantis could be the least of his problems with these White Nationalists! #CPACTexas https://t.co/8ccRtcgXTF

First-time CPAC attendees who heard about the event from Bannon’s War Room told me that they woke up this morning feeling re-invigorated about yesterday’s event.

They told me that Cancel culture and what happened to Trump supporters on Jan 6th has them frightened to even speak out about their beliefs anymore and that they feel very unsafe.  They are afraid of the violence against them for supporting Trump.

“We don’t have security and look what happened to people who were invited into the Capitol on the 6th and walked around a few mins and ended up bankrupted and in prison.  We can’t afford that, but we wanted to come here and hear for ourselves what Trump had to say.  We feel hopeful.  We were up much of the night talking about how we think that things just took a different path than we were on before.  It is good,” one woman told me this morning over coffee.

The spiritual renewal of America was on the minds of Hispanics, Canadians, Jews, Christians, Hindus, and a couple of Muslims at CPAC. There were Black, White and Asian, and Hispanics in attendance.

And we all know that the left is going to keep trying to use lawfare against us, cancel us, scare us and use violence against us; we know that and have accepted it.  How far the left has destroyed America.

However, a common theme is that all of the America First supporters have a higher authority to answer to, so the left is going to be in a greater panic.  Count on it.

It reminds of a song:

“Let he who has been filthy- be filthy still”…