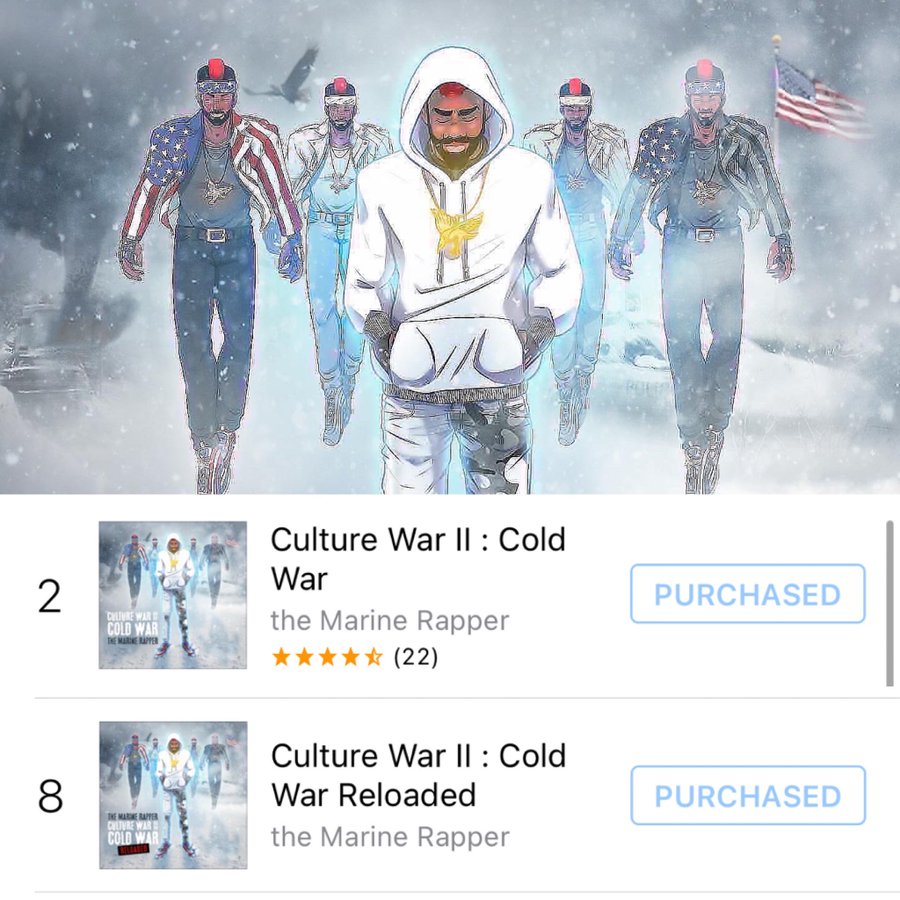 An expert storyteller, a Marine Patriot, a faithful Christian and a really talented rapper – all wrapped up in one dude is what you will find when exploring a new genre of Old School Rap and Hip and Hop. Fresh off the charts with his involvement in the historic “Lets Go Brandon”, The Marine Rapper has a new album, with diverse musical features from his pals, that is doing very well.

“What I don’t like is the closed-mindedness of cancel culture.  I don’t like the fear it invokes and the way it afects art.  It stunts creativity,” The Marine Rapper told me about his biggest problems with cancel culture, or the act of getting someone else knocked off of their platform, or fired for some imagined slight to leftism.

His tunes are resonating with people. The story of how to cancel culture affects the defenders of freedoms may be something new to many Americans. That is a common theme in The Marine Rapper’s music.

The most popular video from the album- so far the mighty storm. A beautiful ballad of inspiration to stay in the fight- which will reach the military and civilian populations.

Culture War 2 starts with a track titled  As Long As We Tracking. The Marine Rapper opens with what sounds like a personal discussion between two men, with perhaps a keyboard being clicked – you can almost image the paperwork is being filled in… “So you decided not to re-enlist… because you want to be a rapper.. you are going to make it big”

The album weaves a tapestry of the trials and tribulations of a patriot warrior who has to defend his American culture against an invasion of what could be considered by some as a Marxist cultural revolution.

“This is a holy war, this is for glory and this is why my people were fighting. This is the coldest war under our culture war” in Freedom– he says.

The album is clearly about protecting freedoms like religious and/or medical freedoms- something good old-school-style patriots in the military should be able to remember.

That is before the left, like Joe Biden and the left, took over and changed things.

Troops lives Matter and Stolen Valor raps about what troops face daily, trying to hang onto their heritage and jobs.

“I know a lot of my brothers and sisters are kinda tongue-tied- but that is alright- I got it,” he raps

The Marine Rapper offers some advice of his own in Outlast the Storm to stick together.

The album ends with Cancel Culture.

Cancel Culture is a tool of anti-American Marxists and one popular music artist is hammering at the concept to make a fool out of the people who practice it on others.

“The war is not yet over, so we go marching on… when drops of rain are united they become a mighty storm” the lyrics say.

This album is destined to become a battle cry for many resolute patriots – who will find a little bit of everything in this album.  You could say there is music unity already.