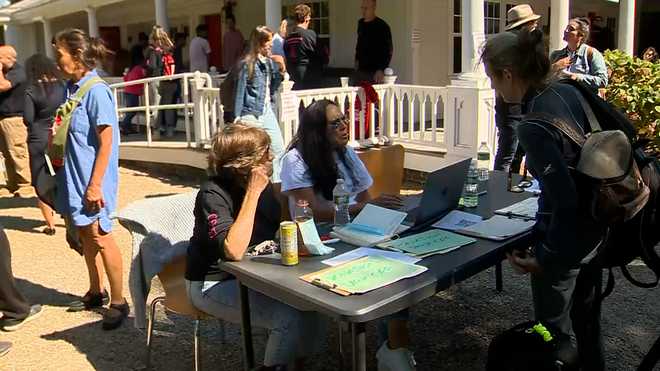 Ron DeSantis went and broke the elite by transporting 50 people to the elite circles of Marth’s Vineyard, and the town broke down over it.

“50 people in Martha’s Vineyard is a “humanitarian crisis,” but a record high number of over 2 million illegals trespassing in our country in 2022 alone is not a problem for Democrats…”Matt Gaetz wrote in response to the dramatic press release from the city about their ‘humanitarian crisis”.

The Comments to the press release are hilarious.

Local news updates were that the migrants were upset as well:

Massachusetts Gov. Charlie Baker said his administration is “exploring” another move for dozens of migrants who arrived on Martha’s Vineyard on Wednesday aboard charter flights linked to Florida’s state government.

“The Baker-Polito Administration is exploring setting up temporary shelter and humanitarian services at Joint Base Cape Cod and will share additional information as soon as it becomes available,” Baker said in a written statement issued Thursday.

The group of approximately 50 Venezuelan migrants, some of them children, arrived aboard charter flights on Wednesday evening. They were brought to Martha’s Vineyard Regional High School, where they were given snacks and shelter.

They spent the night in the care of two shelters in Edgartown, where a humanitarian effort continued on Thursday. Volunteers were seen bringing supplies to the shelters, where the migrants are expected to spend at least one more night.

“They were told in Texas that they were coming to a place that had jobs and homes and shelter waiting for them,” Larkin Stallangs, with the Maratha’s Vineyard Community Services, told WCVB.

“They feel lied to, and they feel betrayed and that, yeah, this was not what they expected,” a translator for one of the migrants told WCVB.