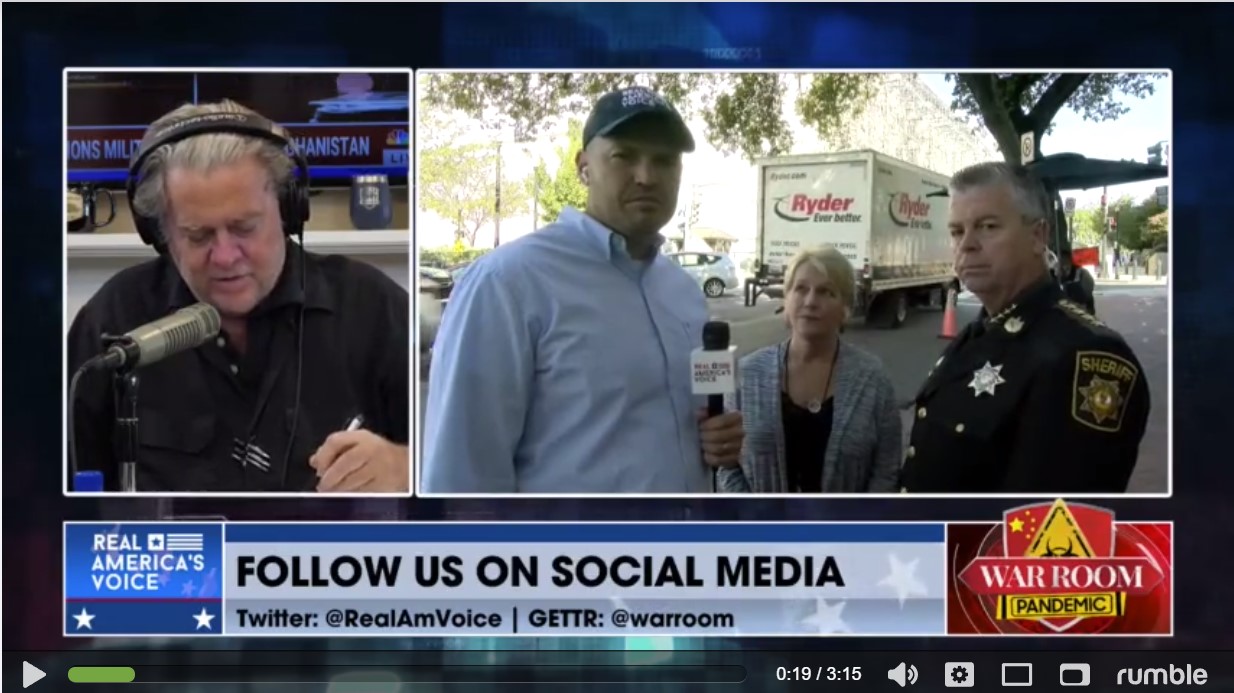 On Wednesday, Bergquam appeared on the popular show with Bannon to update him about the devastating effects of lawless illegals being allowed to commit crimes against American families. Bergquam interviewed an Angel Sister and a Sherriff for two stories that should shake lawmakers.

A woman Bergquam interviewed explained the painful story of her brother’s death at the hands of a drunken illegal driver in North Carolina, who ran a red light killing her brother and severely injuring her.

“We had to beg for the man who killed my brother to be aprehended and to face legal consequences, and then Joe Biden let him off the hook saying that his crimes did not rise to level of being on a Wanted list, even after driving drunk and killing my brother and injuring me,” the woman, who Bannon said was an Angel Sister, told Bergquam during the podcast.

Ben Bergquam is the founder of Frontline America and a top investigative reporter for Real Americas Voice, who covers the ongoing Crisis at the southern border.  Bergquam is also a frequent guest on Steve Bannon’s War Room Podcast.

Then Bergquam interviewed Sherriff  Lewis from Wicomico, Maryland.  The law enforcement officer  talked about the increasing tragic crimes that are victimizing citizens from his state.  “Every state is a border state now due to the catistrophic actions of the Biden administration,” Sherriff Lewis told Bergquam. Lewis said the drug crimes are linked directly back to the open Southern border and talked about how the Government is placing unknown illegals into properties in his town.

Then what he described about his investigations should force everyone to consider who they are voting for and placing trust in.  Lewis gave Bergquam the shocking details of what his department knows about the border crisis.

“We are working very complex title three wire tapping cases where we are following individuals down to the border, and have come into the United States in the last few months, who are coming directly from the Cartels and we are following them back down to the border.  Most recently McAllen Texas, on a flight where they are meeting the cartel and are organizing the transprotation of large, massive amounts of drugs and bringing them all the way back to Maryland,” Lewis told Berquam.

“We are just one of the many counties that are being effected by the reckless policies of the Biden administration. They are destorying counties accross this country.  I see it everyday,” Lewis said.

“These people are what we call Angel families,” Bannon told his audience.  “These are people who have lost a member of their family  and the government doesn’t do anything about it,” he said.

The Democrat administration is not doing anything to help Americans; Lewis told Bergquam.

“The Democrats are causing these problems,” Bergquam told Bannon about the Crisis at the border.

The open border policies that Democrat Joe Biden pushes are dangerous to Americans; there is no other way to describe what he is doing. Not only is Biden reckless about letting criminals go free, his policies entice more illegal and reckless behavior by drawing criminals into the country- like they are breaking into a candy store.

Bergquam’s courage in covering the border crisis stories other reporters won’t cover needs to be commended. For people to understand the threats they face could save lives, which is more than Joe Biden and the people who support him.

Watch this video-and then please share to help get the information out to Americans about what Democrats are doing to American families and to our country: