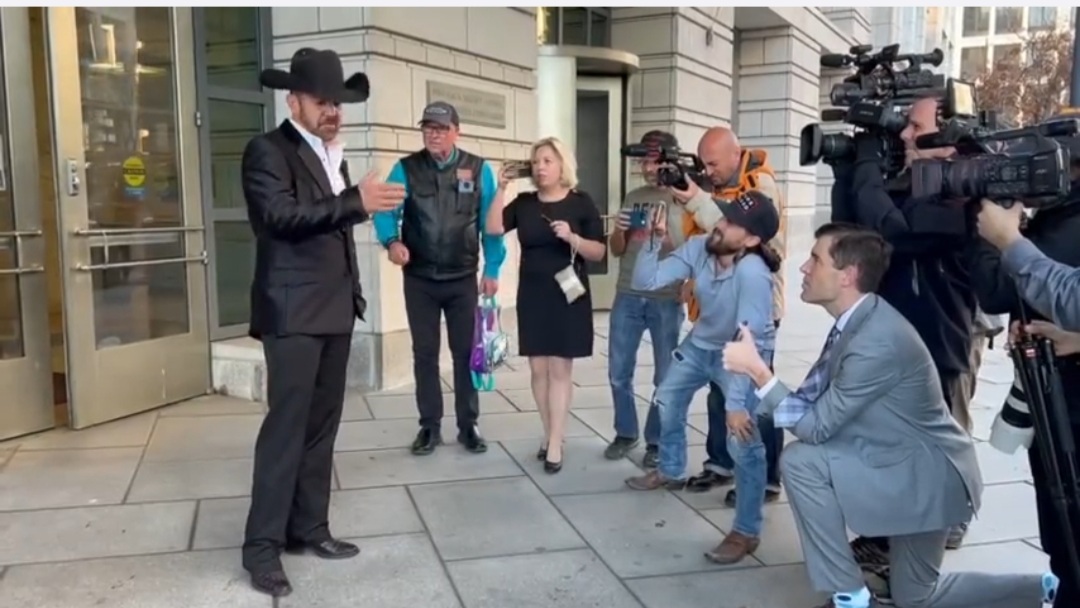 New Mexico County Commissioner Couy Griffin, founder of “Cowboys for Trump,” was arrested Jan 17, 2021, D.C., in connection with the events around the U.S. Capitol of Jan. 6, his trial was finally held on March 21, 2022.

Griffin has long said that his case, which – as Politico described it- is the most” marginal of hundreds of prosecutions stemming from the unrest and violence that broke out as lawmakers were seeking to certify the results of the 2020 presidential election.” is what Griffin calls the case that will prove the US Government has no case.

Griffin’s comments upon leaving the courthouse on Monday were about the abuse he has suffered at the hands of the Media, who wanted to know if he regretted his action. Thre was also breaking news, to come out of the hearing, about former VP, Mike Pence.

“I think the day went very well, the judge is an honorable judge and I think he is just looking at the law, and the prosecution is putting on their case and we are presenting our defense and this is the way our justice system is supposed to work,” Griffin told media. “We still have confidence in our system and we think we will have a big win tomorrow,” Griffin said.

Breaking news: VP Pence sheltered in the underground loading dock for hours on Jan. 6, witness testifies. During the trial for  Griffin, the testimony is the first public acknowledgment of the vice president’s whereabouts during the Capitol riot. For the first time, a U.S. Secret Service agent testified publicly Monday about the underground loading dock where Vice President Mike Pence and his family were evacuated on Jan. 6. WUSA reported:  The testimony came late in the day during the trial for Couy Griffin, a commissioner in Otero County, New Mexico, and the founder of “Cowboys for Trump” who was indicted on two misdemeanor counts in connection with the riot. Griffin chose to forgo a jury in favor of a bench trial in front of U.S. District Judge Trevor McFadden, which began Monday morning.

The government’s main case against Griffen, who is also a pastor, was standing on the US Capitol- said in a since-removed Facebook video “there’s gonna be blood running out of” the Capitol if they return,” per court docs.

The Media asked if Griffen felt any different about what happened on the 6th.

“For you, it is too bad that you are not as worried about pedophiles that have come into hurt our children, as you are about people who crossed a line and went into the Capitol,” Griffin said- slamming the media.

“Griffin told NBC News on Monday that he decided not to ride a horse to the courthouse because he wanted to respect the court and didn’t want to create a “spectacle,” although he said he might ride a horse at the end of the day depending on how the trial went. He showed up with a truck with a “COWBOYS FOR TRUMP” branded horse trailer attached.

Griffin is facing misdemeanor charges. His friend Matthew Struck testified as part of an immunity deal, verifying the videos that he provided to the government.

Walking into the federal courthouse on Monday, Griffin insisted that a metal police barricade he climbed on Jan. 6 on the grounds of the Capitol was actually a step.

“That was a step,” Griffin claimed to NBC News. “It was a metal step, I used it as a step… You can call it a barricade, I call it a step.”