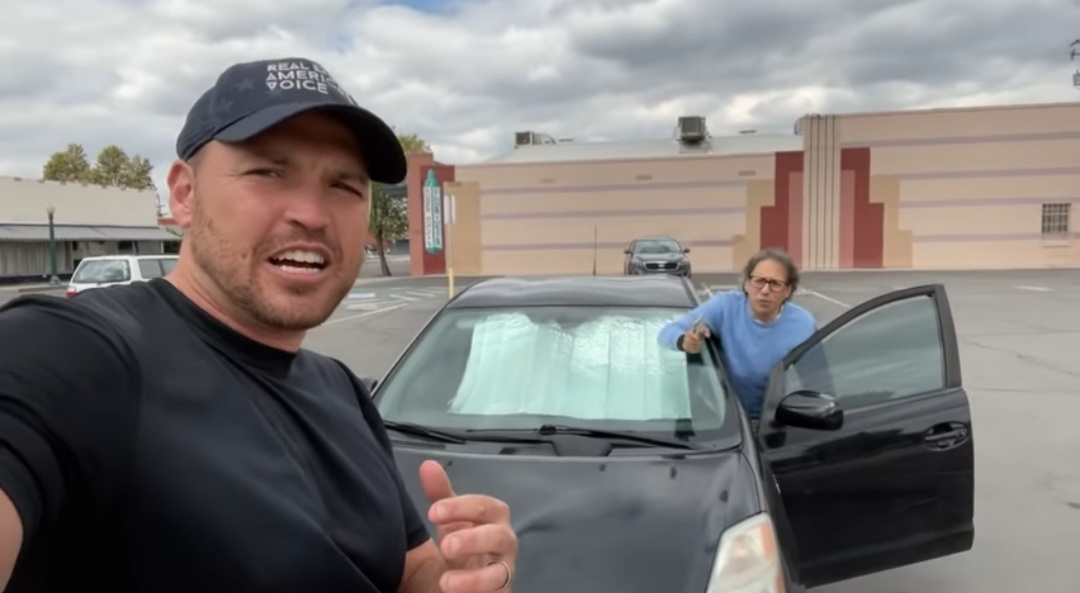 Ben Bergquam, the founder of Frontline American, went deep into a liberal bastion in Fresno, California, to bring attention to liberal attacks on a church there. At the same time, he was recording a strange shadowy figure sat in his car and laid on his car horn in an attempt to disrupt Bergquam’s coverage almost the entire broadcast.

“I am here in support of God in this space, and this Tower district has come into the news lately,” Bergquam.

“This is the tower district in Freson California, which is seeing protests on Sunday while churchgoers attempt to enter their new church. And a police officer who stood up for God has been disciplined,” Bergquam said.

The man in a black Prius, sitting behind a windshield covering and behind dark windows in an attempt to hide his identity harassed Bergquam, blowing his horn constantly, and then lost his mind and freaked out while stalking Bergquam.

The left has two new favorable allied activists on the city council, who is throwing their authority as public servants into the mix and is giving favor to the demonic left, who are protesting the sale of the theater to the church.

Bergquam spoke at length about an unfolding situation at the corner of a street in Fresno, California, where a Christian Church plans to purchase a bankrupted movie theater, where they are holding service and put up a cross on the marquee that caused a stir with the LGBTQ community, in the surrounding area, and then stirred public protest from an allied group of leftists, including a racist group of leftist Hispanics.

THE CHURCH WANTS TO BUY THE TOWER THEATER

Public protests of the church, claiming everyone is a “White Supremacist” had drawn groups from both sides of the issue, which has resulted in the disciplinary actions against the police officers who were protecting church attendees.

The area appears to be turning into a hot spot of vicious anger and hatred.

Bergquam prayed over the area and that set the man in the car “aflame.”

“I pray you set these people free, Lord,” Bergquam said in prayer.

When he wasn’t getting his desired effect by freaking out in his car, the man jumped out of the car and lost his mind, and freaked out, throwing a massive temper tantrum directed at God, the Church, and Bergquam.

During a vulgar and aggressive rant, the man screams “This is a secular country”! “Get out, Get out!!”