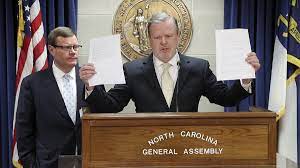 Democrat Governor, Roy Cooper, is about as far left as anyone can get. Cooper has held onto his COVID Emergency Powers, refusing to liberate North Carolinians from his own draconian seizure of small business, education, medical freedom and education.

This is how North Carolinians see Cooper, for good reason:

Today we get another chance to hear from ROYal Cooper at 2pm. What will he say today? Regardless, he wants you to remember the following: #ncpol #raleigh #durham #clt #ncgov #ReopenNC #ReOpenAmerica pic.twitter.com/YGGmgxlta2

Now Cooper is stone-cold busted, as the two Republican leaders of the North Carolina’s General Assembly (NCGA) have absolutely called Cooper out for his seditious attacks on the state.

On Wednesday Tim Moore of the NC House and Phil Berger of the NC Senate released a joint statement after Cooper leads a group of radical leftists into overthrowing the NCGA to fund radical Marxism in NC schools:

“This case has devolved into an attempt by politically allied lawyers and the Governor to enact the Governor’s preferred budget plan via court order, cutting out the legislature from its proper and constitutional role.

“If Judge Lee’s orders are followed, the legislature’s core duty is usurped by an unelected county-level trial judge and an out-of-state consultancy funded by the Governor and his political allies.

“Thankfully, executive branch officials swear an oath to the Constitution, not to an unelected county-level trial judge. A judge does not have the legal or constitutional authority to order a withdrawal from the state’s General Fund [see below].

“The only rebuttal to this clear precedent is an absurd theory developed by Attorney General Josh Stein, which argues that the Constitution, in 1868, ordered a specific funding level for the education budget in the year 2021, and that only an out-of-state consultancy called WestEd can divine the precise funding level the 1868 Constitution ordered.

The Constitution confirms budgeting is the legislature’s exclusive prerogative: “No money shall be drawn from the State treasury but in consequence of appropriations made by law.” (Article V, Section 7.)

The North Carolina Court of Appeals confirms budgeting is the legislature’s exclusive prerogative: “Appropriating money from the State treasury is a power vested exclusively in the legislative branch and no money shall be drawn from the State treasury but in consequence of appropriations made by law. Because the State constitution vests the authority to appropriate money solely in the legislative branch, the Separation of Powers Clause prohibits the judiciary from taking public monies without statutory authorization.” (Richmond Cty. Bd. of Educ. v. Cowell.)

The North Carolina Supreme Court confirms budgeting is the legislature’s exclusive prerogative: “The power of the purse is the exclusive prerogative of the General Assembly, with the origin of the appropriations clause dating back to the time that the original state constitution was ratified in 1776.” (Cooper v. Berger.)