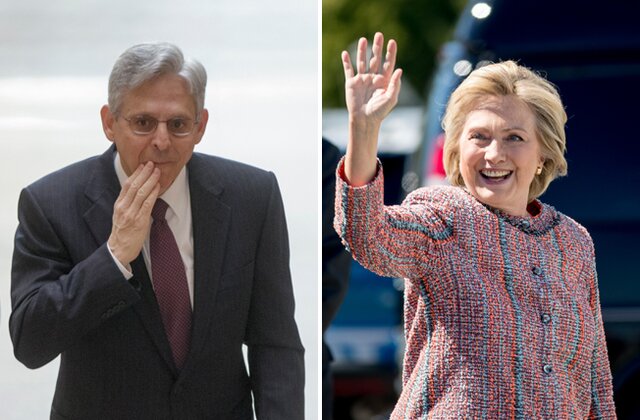 According to court documents, John Durham is talking about several crimes involving Hillary R. Clinton in what is likely the most significant political corruption scandal of our lifetimes. Attorney General Merrick Garland, the US  Attorney General, has numerous conflicts of interest, which should cause him to recuse himself of anything to do with Clinton and the Russiagate spying scandal.

Key Point: There are too many ties between Garland and the group of people who have allegedly betrayed the American people for him to be able to gain the public trust in sorting out what appears to be a long string of comes against the United States of America.

The first ethical concern is that Democrat Jake Sullivan’s wife works for Garland.  Sullivan is the National Security Advisor to Biden, and what we have – according to what Durham has uncovered is a massive national security concern involving many Democrats- including Biden.

The second ethical concern is more complex.  As Durham uncovered in his filings, according to Catherine Herridge, there are more charges than simply Hillary Clinton.  Some people speculate that Biden himself is involved, and that certainly causes a profound conflict of interest.

Thirdly, Garland is connected to Clinton, and according to the Media, Clinton will be running against for President- so the promise of a powerful lifetime appointment is a conflict of interest- right?

According to the Department of the Interior, here is an example of times when recusal is appropriate:  when a conflict of interest exists between an employee’s job duties and financial interests (including interests in future employment) or certain business or personal relationships or outside activities.

Here is Clinton talking about the promise to nominate the same Merrick Garland to the US Supreme Court if she is elected.

Further evidence shows Clinton was on the ‘Garland train”:

Clinton on Merrick Garland according to Ballotpedia:
In a radio interview that aired on September 15, 2016, on the “Tom Joyner Morning Show,” Hillary Clinton did not rule out renominating Merrick Garland to the U.S. Supreme Court. She said that she would “look broadly and widely for people who represent the diversity of our country” if she had the opportunity to make “any” Supreme Court nominations. Clinton also said that she would not ask President Obama to withdraw Merrick Garland’s nomination. Clinton said, “I think we should stick with one president at a time.” She continued, “I’m going to let this president serve out his term with distinction and make the decisions that he thinks are right for the country.”[5]
On March 28, 2016, Clinton gave a speech in Madison, Wisconsin, in which she called on Judiciary Committee Chairman Chuck Grassley (R-Iowa) to “do his job” and schedule committee hearings for Judge Merrick Garland.[6][7]
On March 16, 2016, Clinton released a statement on the nomination of Chief Judge Merrick Garland to the United States Supreme Court.

Here is a Reuters article saying that Clinton would offer Garland the powerful lifetime appointment on SCOTUS.

Merrick Garland is the one who would now determine if Clinton faces charges for the crimes that Durham has uncovered.

Attorney Generals of the United States have recused themselves at least 15 times since 1989. The information HERE cites those instances and states the causes for the recusals if the utilized sources provided causes. Additionally, while this list is not definitive, it demonstrates that Attorneys General have recused themselves for a multitude of reasons over the last few decades.

Understanding The Threat had an excellent piece on the merits of the case against Clinton, according to Durham:

Monday, the former Director of National Intelligence John Ratcliffe publicly stated “quite a few more indictments” are forthcoming in this case.

In this case we have a U.S. Presidential candidate – Hillary Clinton – initiating an operation using a former Department of Justice attorney – Michael Sussmann – to intentionally discredit her opponent – Donald Trump – by paying intelligence agents, including an agent of a foreign power – former British intelligence agent Christopher Steele – to produce a fabricated “dossier” to falsely demonstrate Mr. Trump’s collusion with Russia, and the entire plan is supported by senior U.S. administration and intelligence community officials with the dutiful U.S. media regurgitating these lies as quickly as they were able.

The magnitude of this case is unprecedented in American history.

The national security implications of these revelations are apparent. The facts reveal the U.S. national security apparatus is completely corrupted, further supporting the need for a massive purge in the federal government and the need of states and local communities to take charge of their own security and way of life.

One can only imagine how American citizens who cherish the law, the U.S. Constitution, and the Declaration of Independence will respond if all of the parties complicit in this coup of the President of the United States are not brought to justice.

How will U.S. federal agents who have sworn an allegiance to the U.S. Constitution respond?