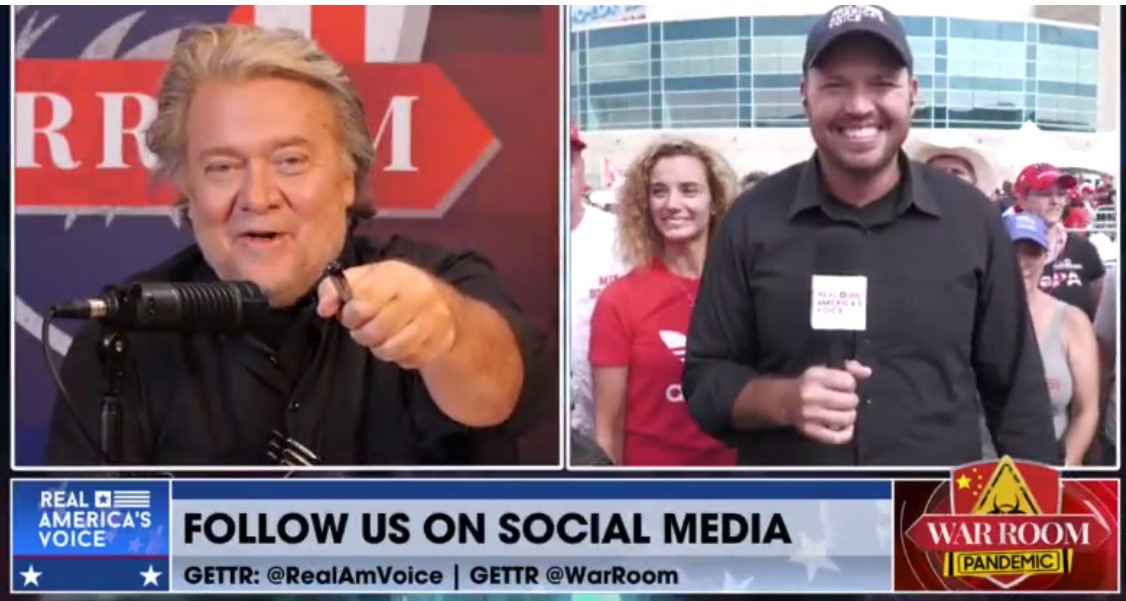 Ben Bergquam, a correspondent for Real America’s Voice, attended the Trump ‘Save America’ Rally in Pennsylvania and did some pre-show interviews with attendees of the rally while they waited before the programming stated.

Bergquam’s reports and interviewers appeared in the War Room program with host Steve Bannon, who is generally viewed by his fan as a hero, so they were excited to be able to connect with Bannon directly and send him their positive thoughts and appreciation for his service.

The enthusiasm from the crowd for President Donald Trump was red hot, and the love and appreciation for Bannon was substantial.

Even after Democrat Joe Biden’s continued assault on Bannon and on the MAGA movement, there were smiles, enthusiasm and happiness- and a lot of hope for the future in the massive crowd.

BANNON: Let’s go to The Venue itself, the indefatigable Ben Burgquam. I know you normally, are In harm’s Way Down on the Rio Grande or on the Mexico in the line of fire. It’s always great to see you with with the greatest people on this earth. That is the Maga folks up there in the Commonwealth. Tell us what you got going on.

BERQGUAM: Hi Steve! Well, we got some super ultra Atomic Maga folks out here! Like one of your biggest fans out here, who wants to just give you a message.

CINDY: Hey Steve I’m Cindy and I just want to say thank you for all that you’re doing for us. We all appreciate it and love you. Love you.

BANNON: Love you guys too. I want to remind people that Biden couldn’t fill 275 seats at his speech the other night.

BERGQUAM: It’s already thousands. Here is Mike. Boatman. He’s been here since Tuesday. It’s going to be massive. This is my spiritual friend. Kasondra Watkins. What’s your message to America?

WATKINS: Blessed is the nation whose God is the Lord and we made a covenant with the Lord Jesus Christ. As a nation, we have a prophetic Destiny and it shall be fulfilled. If you feel like you have no hope, there is hope and it’s through Jesus, amen.