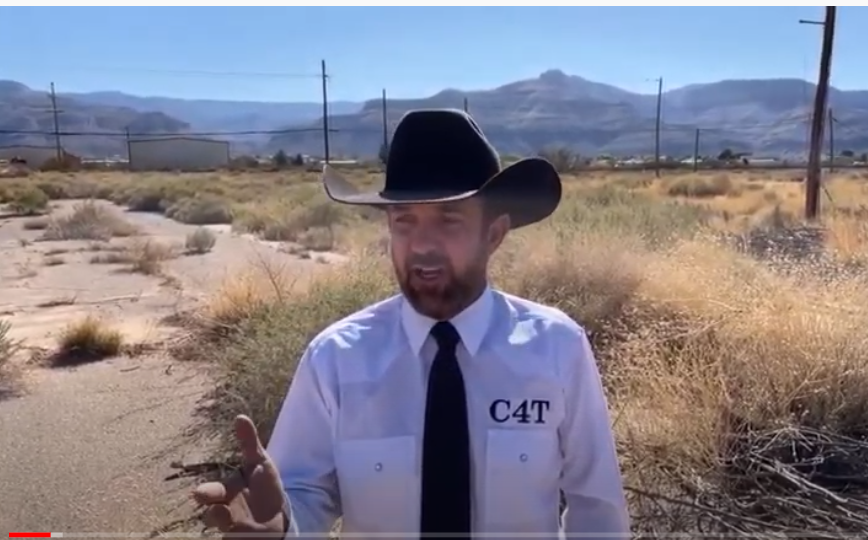 “I was a pastor and a business owner, and I got into politics because I didn’t feel like I had a voice in politics here, and I supported President Trump and wanted him to know he had a lot of support from this area that the media wouldn’t tell him about, so we started Cowboys for Trump for that purpose and rode into DC for that purpose,” Griffin said.

“We see a horribly negative effect from the open borders in this country because of jobs and increases in crimes,” he said.

“I went to DC to support President Trump and his America First policies. I spoke with other pastors speaking in El Paso and traveled to DC, and I wanted to pray for people at the platform. I got separated from the area because it was cold and windy. We were on the way back to the car. We were trying to find a way to pray,” he said.

Couy talked about his journey to the Capitol and how he made it to the steps to pray and stopped in San Diego to find and pray with the family of Ashli Bobbit, who was killed inside the Capitol.

“We were shocked about the violence and didn’t know anything about what happened. I think people should be held to account for whatever they did. So I traveled back to Washington DC. Because I wanted to stand for the President,” he said.

“To put my statements in context, it is similar to sports talk. I did say that the only good Democrat is a Dead Democrat. I did say that blood could roll under the doors of the Capital. Neither one was made to call for violence; I even said that I did not mean these things in a violent way after the original statements. I spent 3 weeks in jail for it,” he said.

Bergquam reminded viewers that no Black Lives Matter rioters had to face charges.

“I never went into the Capitol; I was only on the steps. I was accused of encouraging the people to storm the Capitol. When I went back, I was picked up on an FBI warrant. I was in a cell for 10 days before I was allowed a phone call. I was in solidarity confinement. They stripped me of my rights; my Mom didn’t even know where I was. I was locked in my cell for 23 hours a day for the rest of the time on a misdemeanor trespassing charge. The charge was that I knowingly entered an area that I did not know I could not enter,” he said.

“I have been stripped of my rights; I had to give up my Constitutional Rights while I am facing the rage of the left, with the media calling me a racist, in an area where I have no protection,” Griffin said.

“I had to have my arms chained to me, had to shuffle around, on a misdemeanor charge. Now they have me charged with being inside the Capitol building. They used me in the impeachment hearing to get to the president,” he said.

“They did not confiscate one firearm on January 6th; how can it be an armed insurrection? “Griffin asked.