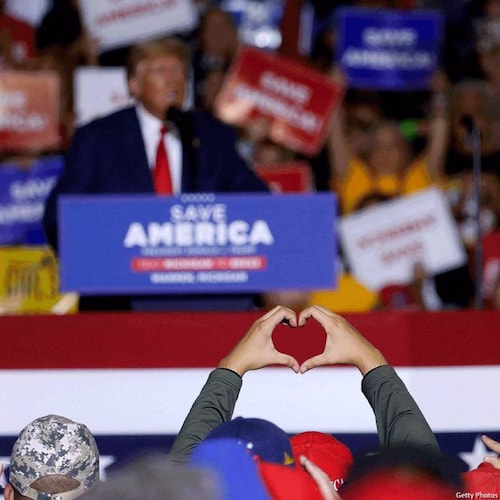 Ben Bergquam, a correspondent for Real America’s Voice news network, did an excellent job of showing the enthusiasm of the ‘pre-rally’ crowd at the Trump rally in Warren, Michigan on Saturday.

President Donald J. Trump encouraged Michiganders to vote red Saturday at a Save America rally in Warren, Michigan, holding that the blue Democrat Party was rife with election fraudsters, cons, liars and thieves.

US Rep from Georgia- Majorie Taylor Greene, who has family ties to Trenton, Michigan, was a surprise guest speaker.

Bergquam appeared on the War Room program- hours in advance of the main rally- to share footage of attendees with host Steve Bannon, by showing the crowd that had gathered to enjoy the ‘rock concert’ style tailgating that goes with Trump’s events.

These are the people the political types and the media refuse to acknowledge exist.

While the media was in attendance to mostly discredit the MAGA movement of populist supporters for Trump’s America First agenda, independent media, like Real Americas Voice, has grown in popularity to become large enough to travel around from rally to rally and cover the American people who are still supporting Trump- and his endorsed candidates.

The extensive media interest in the event was noted, as well as a large, enthusiastic crowd:

Bergquam caught up with Mike Lindell, founder of Frank Speech and CEO of My Pillow:

At the rally Trump smashed the communist desire of the left, and told people that they need to swamp the voting places for his MAGA candidates to save America Michigan.

“They want no voter ID,” Trump noted before a thousands-strong crowd of supporters. “You know why they don’t want voter ID? They fight voter ID because they want to cheat.”

The speech started with a reminder of those Americans who were caught in the recent devastating storm:

“Before we begin, I want to send our profound sympathy and our immense support to everyone back in Florida, Georgia, the Carolinas who are struck by this brutal wrath of the hurricane,” Trump said. “Not a good hurricane, this was a big one.”

“We’ll all stay strong together and pull through it. That was a bad, bad couple of days. Six weeks from now the people of Michigan are going to vote to fire your radical left Democrat (sic) Gov. Gretchen Whitmer,” Trump said as he veered into brief comments on the GOP slate.

Trump was campaigning for Tudor Dixon for governor, Matt DePerno for attorney general, and Kristina Karamo for secretary of state , all who gave rousing speeches.