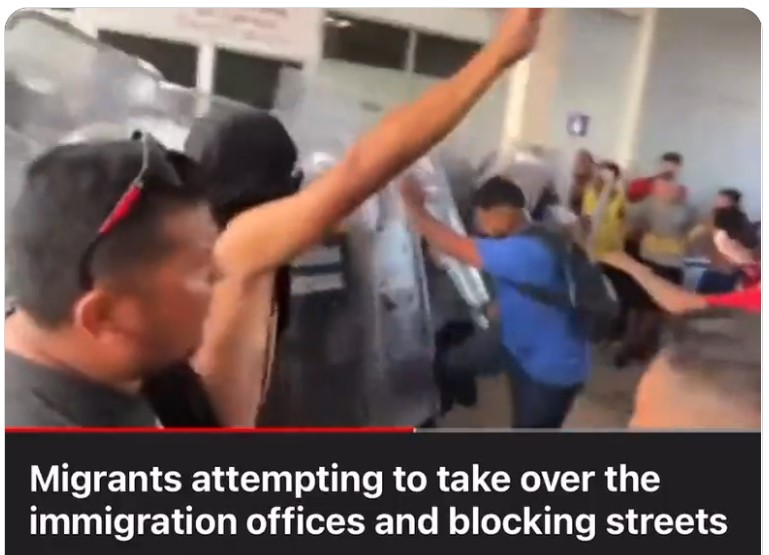 Ben Bergquam, host of Law and Border and founder of also of Frontline America, Anthony Aguero, and Oscar El Blue Ramirez (who are both with Border Network News), are three correspondents for Real America’s Voice.

Together they have published some exclusive footage about the border invasion that is more complex in details than anything the lapdog media will show you- because they are not there talking to people and investigating what is going on.

In the following video – which was re-tweeted by Bergquam, of Ramirez’s footage, many illegals from Africa are seen in Mexico in a peaceful process of standing in line. Still, many of the migrants there are not so peaceful, as shown by Anthony Aguero.

These are the ‘mostly fighting age’ men- as Rameriz describes them, the leftist Non-Government Organizations (NGOs) are helping to invade the United States and to harm impoverished communities in Mexico, so there is no resistance to the hoards who have to come through Mexico to get to the United States of America.

While Chinese and Mexican drug cartels are building massive, lucrative, human and drug smuggling operations – that makes more than other ‘Fortune 500 companies in the USA- the left is assisting the cartel with provisions left along their smuggling paths.

Bergquam and Aguero are on the border with Tim Foley, who is assisting in finding the provisions and supplies left behind by some of the American leftists.

“These people need to be put in prison,” Bergquam said.