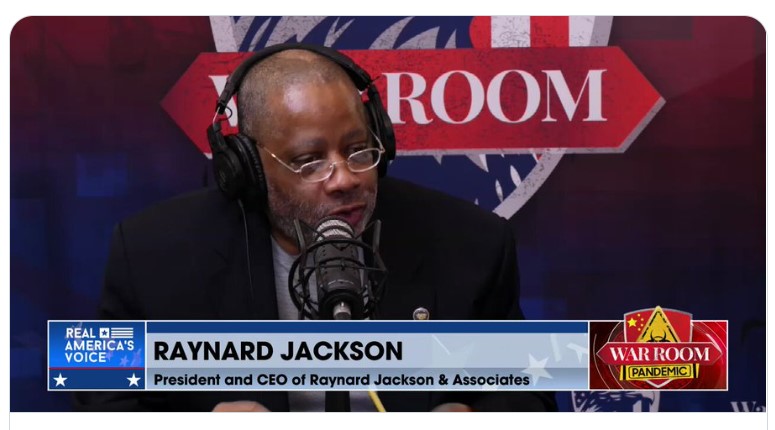 Eric Greitens is a retired Navy SEAL and the 56th Governor of Missouri, he is an America First Candidate for U.S. Senate, and he has been traveling the state asking people for their vote on August 2nd- and he has earned the support of Raynard Jackson, who minces no words when it comes to how he feels.

“Greitens, a former highly decorated Navy SEAL, was elected as the first Jewish Missouri governor in 2016.  He was later forced to resign his seat as governor based on false charges levied against him by the radical liberal Missouri Democrat establishment and a spineless Republican state legislature,” Jackson wrote.

Recall Jackson visited with President Donald J. Trump at the White House, where he spoke honestly about what is going on in the Black Community, and it went viral like crazy!

Raynard Jackson, chairman of Blacks Americans For A Better Future and columnist for Thy Black Man has been a member of the Republican party and around DC for long enough to be able to speak frankly about his ideas as a Black ‘America First’ Conservative without worrying about the reactions of the left.

Not that he really cares if they are offended.

Jackson published an op-ed about candidate Greitens for the War Room this week that will hopefully reach a lot of voters.

“Greitens is the only unifying candidate in the Republican field.  None of the other Republicans have any chance of getting the most minimum amount of support from within the Black community.,” Jackson wrote.

Here is the full article:

In the immortal words of Gomer Pyle, “Surprise, SurPRISE, SURPRISE.”  The radical liberal media and Democrat operatives like “Republican” Senator Mitch McConnell are at it again.

They are colluding with each other in their perverted attempts to derail the U.S. Senate campaign of former Missouri governor, Eric Greitens.

Greitens, a former highly decorated Navy SEAL, was elected as the first Jewish Missouri governor in 2016.  He was later forced to resign his seat as governor based on false charges levied against him by the radical liberal Missouri Democrat establishment and a spineless Republican state legislature.

In 2018, Greitens was indicted on two felony invasion of privacy charges.  In less than three months, the charges were dropped.

As a result of these false charges, William Tisaby, a former FBI agent who worked on the case with St. Louis Circuit Attorney, Kim Gardner, was indicted on six counts of felony perjury and one count of felony tampering with evidence.

A couple months ago, Tisaby plead guilty to misdemeanor evidence tampering and was sentenced to one year of unsupervised probation.

Gardner, the Circuit Attorney, was brought up on charges before the Missouri Office of Disciplinary Counsel which has oversight of the conduct of lawyers in Missouri.  She admitted to misconduct and was given a reprimand that is now a permanent part of her legal record.

Oh, and by the way, did I mention that both Tisaby and Gardner are both radical liberal Black Democrats?  This is exhibit A that proves that Blacks can indeed be racist!

To this day, we haven’t heard a word from the Missouri NAACP or St. Louis Urban League or the Missouri Black Caucus.

I am from St. Louis and knew many of the players involved in the Greitens case.  I knew from the beginning that Greitens was being set up and made that known to a lot of influential Republicans back home.

But because Greitens was not part of the good ole boys club, no one came to his defense!!!

I have known Eric for a few years and if I had to go to battle, I most certainly want him in the foxhole with me.  No question!

He is the personification of MAGA (Make America Great Again); but he also represents the other MAGA (Missourians Always Go Against the grain).

Having been on the receiving end of these types of tactics from within the party myself, I know exactly what Eric is going though.

So, to Greitens I say, stay strong, we got your back.  To the voters of Missouri, I say let’s prove Democrat operatives like Mitch McConnell wrong.

Let’s go out Tuesday and vote overwhelmingly for Greitens.  Let’s make him our nominee for the U.S. Senate.

The establishment thinks Eric is damaged goods, but the opposite is true.

What the establishment doesn’t quite get is that Greitens is the only candidate who can garner a significant percentage of the Black vote in Missouri during the general election.

How do I know?

Again, I am from Missouri and have talked with Blacks across the state who are prepared to come out publicly for Greitens.

The number one reason why Blacks are willing to vote for him is because he is a Navy SEAL.  Blacks of all ages have strong support for the military and by virtue of being a Seal, he is comfortable with people from all walks of life and is at home in engaging with people who have a different background from him.

The other reason is that Eric has committed to me that he will be the biggest and best advocate for Black entrepreneurs in the U.S. Senate.

He understands that the businessman is the true leader within the Black community and if you get the Black entrepreneur on your side, he will bring you the pastor who will then bring you the congregation!

Greitens is the only unifying candidate in the Republican field.  None of the other Republicans have any chance of getting the most minimum amount of support from within the Black community.

Finally, Eric, I had breakfast this morning with former British Prime Minister during WWII, Sir Winston Churchill and he told me to tell you:  “To every man there comes a time when he is figuratively tapped on the shoulder and offered the chance to do a great and mighty work, unique to him and fitted to his talents; what a tragedy if that moment finds him unprepared or unqualified for the moment that could be his finest hour.”

Tuesday you indeed will be proven prepared and uniquely qualified for the moment that will be your finest hour.  All we need is for the voters of Missouri to show up and vote for you.

Raynard Jackson is a Pulitzer Award nominated columnist and founder and chairman of Black Americans for a Better Future (BAFBF), a federally registered 527 Super PAC established to get more Blacks involved in the Republican Party. BAFBF focuses on the Black entrepreneur. For more information about BAFBF, visit www.bafbf.org. You can follow Raynard on Twitter @RealRaynardJ or Gettr @RaynardJackson.