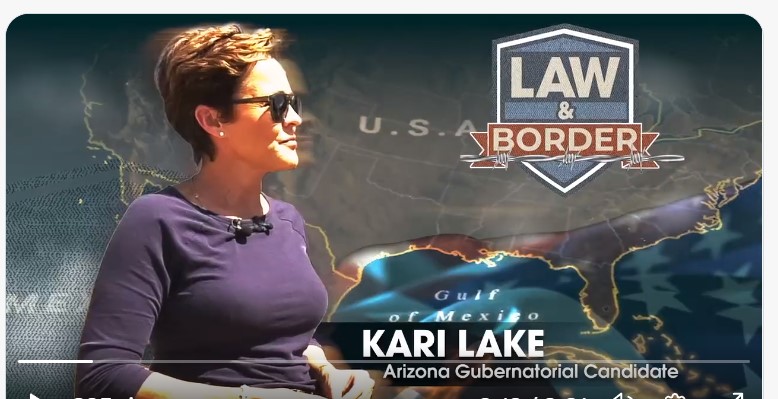 Ben Bergquam has another explosive episode of Law and Border coming up on August 6 , for Real America’s Voice.

Republican Governor Candidate- Kari Lake- will join him ahead of her Arizona Primary to explain why winning the state is essential in the fight for the sovereignty of the United States of America.

Lake spoke with Bergquam recently and laid out her agenda perfectly when they were touring an area near the border security wall- and upon seeing a group of illegals getting into a Border Control vehicle to be transported into the United States of America, gestured to the group she said:

“And this is why I always say what happens at the border, what happens in Arizona with the pains of the order doesn’t stay here, and people know that. You and I were in North Carolina the last time I saw you at the Trump rally, and they were chanting build the wall , build the walls, right? America wants the wall. It is the number one issue in every state, and we’ve got to make sure that we get some strong border Governors in office, because if we lose a State like Arizona, or we lose one more border state to a radical Marxist- Socialist, I feel this country’s gone,” Lake told Bergquam.

LAK HAS SO MUCH MORE TO SAY ABOUT THE BORDER BELOW IS A TEASER OF THE UPCOMING SHOW.

And Lake is right. Bergquam had just recently exposed a group of illegals who had been abandoned by the Coyote, who had been paid to help a group navigate the border. The abandoned illegals had confessed to Bergquam that they were waiting for someone from Border patrol to come and long and help them get to Phoenix, Arizona, but they had seen no one on the road where they were an obvious- well traveled pathway to the border- for days.

“And we got a group, looks like they have given up,” Bergquam said as he approached some people under a tree.

“Where are you going?” Bergquam asked the woman.

“And then you staying in Phoenix?” he asked.

The others in their group had walked into the country.

Where are you from? Guatemala the other person said.

So, some of them continued, “You’ve been waiting here for two days? ” Bergquam asked.

“What are you going to do? If you nobody came, just walk?” he said.

“Yes. We are walking at night,” she said.

“Yeah, border patrol doesn’t usually come down here, they are so stretched in all the other places it’s where they come down,” Bergquam told the pair.

“They are sitting there waiting under the tree. Now, they got separated. This was a group of eight and they got separated from their group. She gets started feeling sick, one of them hurt his knee and so they left them.

Now, they’re waiting here, they’ve been waiting two days. Hoping to see border patrol, they have not; they’ve been on this road. Heading down to the border at have not seen the in this spot for two days- any border patrol.

That is how prevalent this is. Now the other part of the group is still making its way into the United States. These guys decided to give up, they knew they were going to be deported, and she said she was not going to do it again.

These guys said don’t do it -but you know this is what you see down here, it’s just never-ending,” Bergquam said.

“Teaser for our next episode of “Law & Border” and our primary election coverage Tuesday, Aug 2, live from Arizona with the one and only @KariLake for Governor, only on @RealAmVoice! Also, with the best narrator in the business, my brother and patriotic entertaine@DaveBrayUSA!” Bergquam posted.

Here’s a sneak preview, I think about the families in America that are still struggling. We just went through two years of lockdown, American lockdown with covid and all of the nonsense that went along with that, and yet we’re just giving our country away,” Bergquam said in the clip.

We’re on the verge of losing our country right now. It’s so alarming for Arizonans to see this happening. We know, we hear about it, but when you come down to the Border, I’ve been down here. Several times at various places along the Arizona border, very long border to see this happening.

It’s like a punch in the gut for Arizona,” Lake said.

Make sure to tune on on Tuesday- and please share this article and help get the word out about Lake’s primary this week.