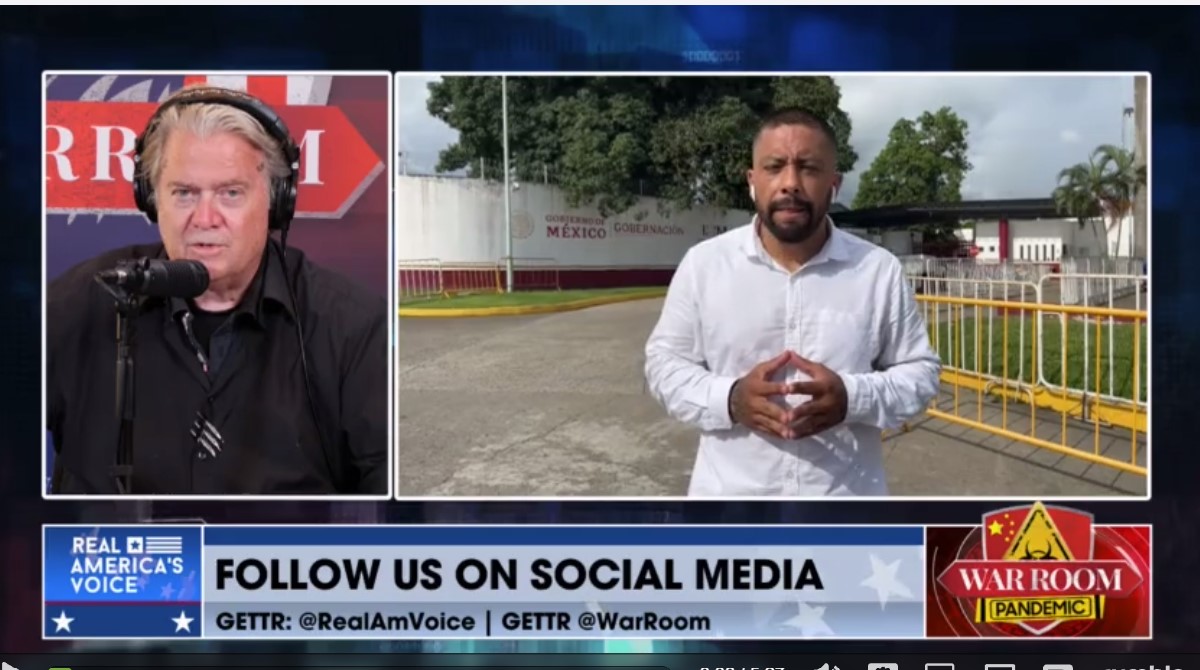 Oscar El Blue Ramirez is a Mexico correspondent for Real America’s Voice. He recently appeared with Steve Bannon on the War Room Program to deliver some exclusive news about the state of immigration between Mexico and the US and how Mexico has designed a go-around to eliminate the unwanted agitators. But unfortunately, they are coming through Mexico on the way to the USA and causing damage to the country.

Ramirez had reported last week about violent throngs of migrants who had caused roads to be shut down and who attacked police while they were demanding assistance to get to the USA- and be allowed to transport themselves through Mexico.

Mexico wanted to get rid of the people as fast as possible.

In the following video, Ramirez reported an update of that situation to Bannon from Mexico and told him the following:

RAMIREZ: “The Mexican government has found a way to create a pathway for migration with this letter of expulsion. As soon as the individual arrives, they will get one of two letters, they will be to the North or the South border, so the ones who will be responsible is the United States of America.”

“The migrant will not be eligible to be returned back to Mexico because he’s expelled from our country. So now, the United States government is obligated to keep the migrant or ultimately to deport them back to their native country.”

BANNON: “Hold it, Oscar. You’re telling me if they come across and they’re, and they’re not adjudicated, or they really don’t have the ability to get Asylum. So we don’t have the opportunity now to send them back across the river to Mexico, but we actually have to send them back to their country of origin, which could be the Caribbean. Heck, it can be Ukraine. Is that what you’re saying? Is that what the American government has just implemented?”

RAMIREZ: “Yes, the Mexican government has given out a letter that is called a letter of expulsion, saying -you were expelled from the country; you cannot come back to the country of Mexico. Migrants are using it to be expelled to the northern border because they want to go to the North to the USA.”

BANNON: “Is this because of the violence of the last caravans? Where they attacked police, and you covered that? Espicially the fighting-age males?”

RAMIREZ: “Yes. It has to do with that and what I have behind me. The migrant center who has detected migrants with criminal backgrounds who were the agitators. They have been arriving here. The Intelligence agency of Mexico have been deporting 727 individuals. The open border policies that you have discussed, Mr. Bannon, are affecting our country of Mexico.