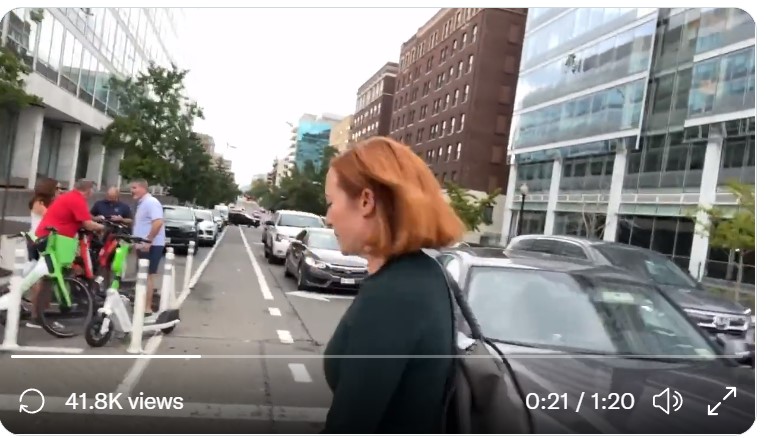 Ben Bergquam, the host of Real America’s voice, show Law and Border, caught up with Jen Psaki, the former White House Press Secretary for radical Democrat Joe Biden, who first agreed to speak with Bergquam and answer questions, but then quickly ran away from him as realized he was not a friendly looney leftist.

Check it out from the video of Ben asking her about the open US borders:

BEN: Ms Psaki, can I ask you a quick question?

JEN: Oh I am not doing interviews

BEN: I’m just wondering, though, are you disappointed that they replaced you with instead of circling back somebody who openly lies about the Border crisis that Joe Biden created?

JEN: It’s nice to meet you

BEN: That’s the problem. They know it’s a lie Biden knows; it’s a lie. They’re just lying to you straight face. Just know that these are the enemies within; you’ve got busloads of illegals., coming and being dropped off here all over the country, open borders policies that are invading our country, all being brought to you by the enemies within this city and their protectors, the mainstream fake news media, CNN, MSNBC real media should be here, calling them out in front of them. Exposing them for their lives. But instead, they’re allowed to get away with it. They can’t do that anymore. It’s time to hold them accountable.

Ran into “circle-back” Jen Psaki in Washington DC and surprise surprise she didn’t want to talk about Biden‘s Border lies. It’s time to hold the enemies within and their #FakeNews accomplices accountable! #TrumpWasRight @RealAmVoice @Saorsa1776 pic.twitter.com/828qVWAaEY