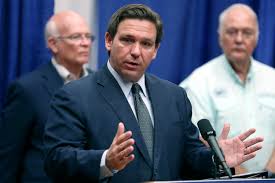 While American parents are stunned and shocked at the overreaching by their children’s schools, few people understand how to effectively combat the Federal Government to make the changes that parents and children need to return back to “normal” public education. One person gets it- the Republican Governor of Florida is leading the way in how to reclaim control over schools, teaching methods and Curriculum.

“Governor Ron DeSantis held a press conference to announce a bill to eliminate the Florida Standards Assessment – the final step to end Common Core in Florida.”

SINCE AT LEAST 2014, LEADERS HAVE TRIED TO END FEDERAL FUNDING OF COMMON CORE

DeSantis did it in 2021-According to Jacksonville News:

“We need to measure results, and we will continue to do it. We will continue to set high standards,” DeSantis said. “But we also have to recognize that it is the year 2021 and the FSA is, quite frankly, outdated.”

The FSA is designed to measure “education gains and progress” in Florida students in the subjects of English language arts and mathematics, according to the Florida Department of Education website.

DeSantis said he will ask the Legislature to drop the current annual standardized testing in public schools and replace it with assessments taken throughout the year to better gauge individual student progress.

DeSantis said by creating the new Florida Assessment of Student Thinking Plan, Florida will become the first state in the nation to fully implement progress monitoring instead of end-of-year standardized testing, and fully eliminate common core.

DeSantis is using the right kind of legislative action to end Common Core. The process included Florida teachers who helped to develop the new standards.

According to an earlier press release on the process from DeSantis’ office:

Tallahassee, Fla., February 7, 2020 – At the direction of Governor Ron DeSantis, the Department of Education released the proposed Florida B.E.S.T. (Benchmarks for Excellent Student Thinking) Standards for English Language Arts (ELA) and Mathematics, and announced that Common Core has been officially eradicated from Florida classrooms. The Commissioner is recommending that the State Board of Education formally adopt these standards February 12.

“Florida has officially eliminated Common Core. I truly think this is a great next step for students, teachers, and parents,” said Governor Ron DeSantis. “We’ve developed clear and concise expectations for students at every grade level and allow teachers the opportunity to do what they love most – inspire young Floridians to achieve their greatest potential. These standards create pathways for students that lead to great college and professional outcomes and parents will now be able to reinforce what their children are learning in the classroom every day. Florida’s B.E.S.T. Standards were made by Florida teachers for Florida students, and I know they will be a model for the rest of the nation.”

“Governor DeSantis made it very clear that we had to reimagine the pathway to young Floridians becoming great citizens, and we’ve done exactly that with the B.E.S.T. Standards,” said Commissioner of Education Richard Corcoran. “Florida will be the first state in the nation with an ELA booklist that spans grades K-12, the first state in the nation with a civics booklist embedded in its ELA standards, and a state that has dropped the crazy math. Florida has completely removed ourselves from the confines of Common Core.”

The Florida B.E.S.T. Standards are posted at http://www.fldoe.org/standardsreview.

And just like THAT- at least one American state has begun to restore public education for students and parents.