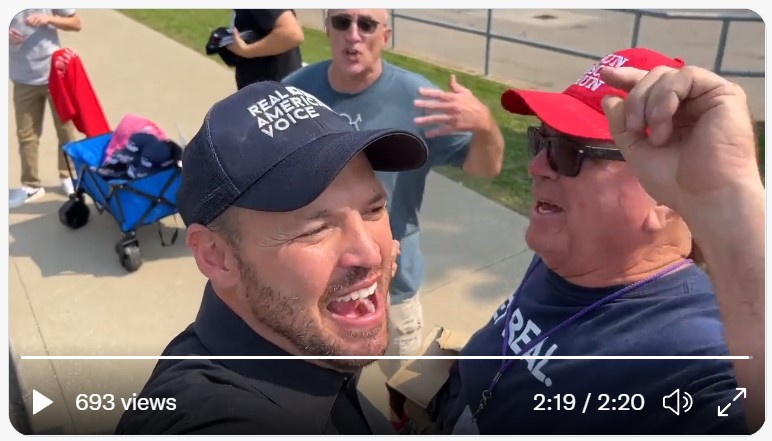 Ben Bergquam was live on the scene at the Youngston Ohio, Save America Tour with President Donald J. Trump, where he and his friend, Danny found what they called the dueling ‘Biden Rally’- one lone participant who was voicing his concerns about lost nuclear codes.

“How come we never see a hat with Biden’s name on it?” Bergquam asked while walking along before he was stopped by the Biden rally participant.

Bergquam had been reporting on what he calls the “Trump economy” interviewing merchants who were practicing free enterprise – and small business, while selling gear and bling adorned with the name Trump and with the words Make America Great Again- MAGA.

“I like Trump because he understands business,” one merchant told Bergqual about why he chose to sell Trump gear instead of Biden gear. “Trump Train,” the merchant said as Bergquam joyfully exchanged ‘high- fives’ with the men, sharing a jovial laugh and good patriotic fellowship.

Other retailers in the are reported why they were excited about selling merchandise that had to do with Trump- as opposed to selling anything with Biden on it.. basically they answered- because no one wants to wear a hat with the name ‘Biden’ on it.

Just more fighting for freedom and having fun, on the campaign trail.