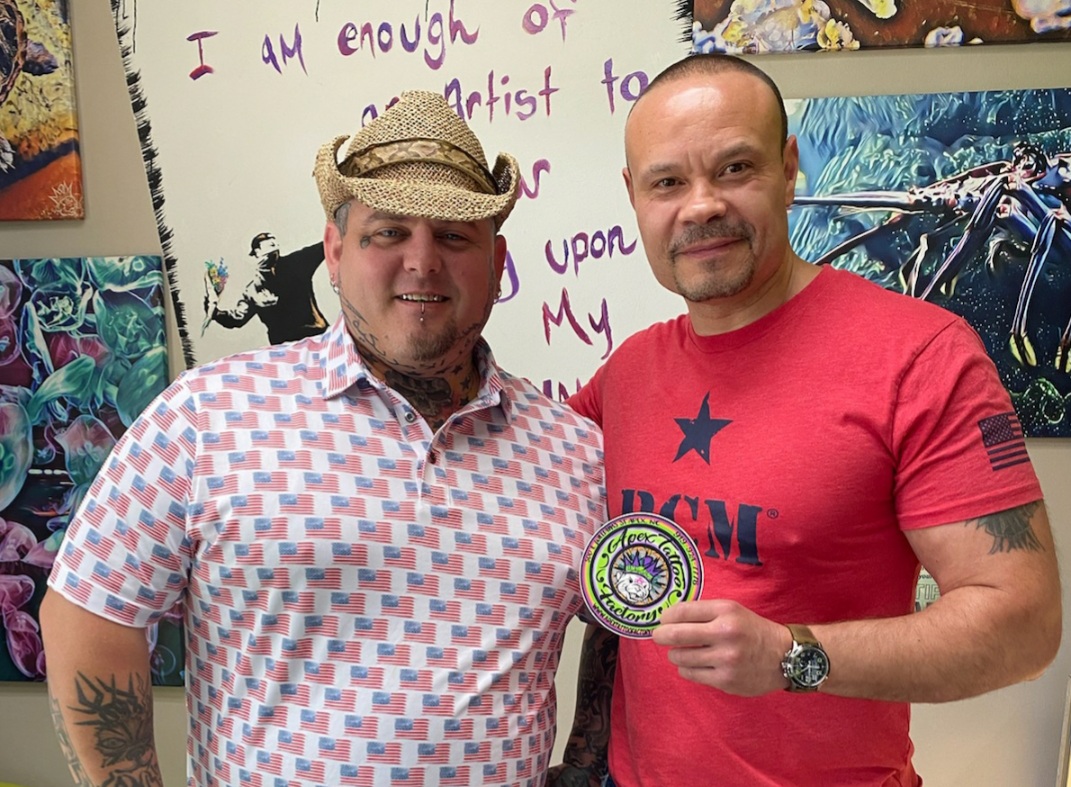 Matthew “Jax” Myers hasn’t gone out of his way to seek the spotlight, a quiet small businessman who owns a popular Tattoo Shop in Apex, North Carolina. Still, he has been visited twice by top Conservative icon Dan Bongino in his shop.

Bongino visited Apex for the first time in 2020 after Myer was arrested at the direction of far-left radical Democrat Roy Cooper, the Governor of North Carolina.  “King” Cooper, as Myer calls him, ordered Myer to be arrested in 2020 after Myer stepped foot into his business, Apex Tattoo Factory, against the pandemic orders.

“Dan has been very supportive of me and my activism, and I really appreciate his enocraugement.  He cares about what I think is important for North Carolina,” Myers told me on Saturday, after his second meeting with Bongino.

Look for Myers to be highlighted on Bongino’s show on Monday.

“We mostly talked about this great group I am with who is making a real difference in North Carolina. Right now we want to hit the ball before Cooper does, and get his mask mandate for schools taken apart. We just had Cooper’s orders lighten up on us, but now we are anticipating that we are facing new face mask mandates from the Govenor’s office, so that is our focus,” Myer said. “We want more and more people to join us in our protest of the masks and in all of our upcoming days of action, because we are not stopping there.”

Key Point:  “I really want people to hear about this group and support them on August 3rd,” Myers told me.

After getting national media like Glenn Beck’s The Blaze, people started to identify Myers at local protests and started asking him to speak about his experiences.  Eventually, others approached him and asked to take a leadership role as a local and state activist during the reopen movement.  So because of his high-profile arrest and because of his ability to reach new people and talk about legislative issues and politics, Myers became a public personality.  Myers then launched his brand, Unaltered 1776 and has grown into a mature activist leader.

HOW TO DO ACTIVISM

“After being arrested I found people to show me how to do legislative action and activism the right way, because we need people to see what Roy Cooper is doing us here in North Carolina.  I want to teach other people to do the same that is why I have a podcast. I have teamed up with a powerful group of people, with a great leader- Lana Witt- who has  a group called OpenNC,” Myer said.

OpenNC was instrumental in assisting legislation that will give school boards the option over the use of facemasks. The bill made it through the NC House to where it sits now in the North Carolina Senate waiting for passage.

“The mental health issue is much scarier than the risk of COVID is to these children, and that’s the focus that we need to have,”  Willis told me. “We’ve got a full year of data from the schools behind us. We need to be using that and looking at real-world examples of this… We need to do what’s best for these children, and it’s time to give them that option.”

“Citizen involvement is important in helping us draft legislation.  I am proud to work with people like  OpenNC because they are a well-organized group of concerned citizens and they presented a great case,” Willis said to me. “The art work was fantastic”

Myers, the tattoo artist was the artist for the posters that have become the logo for the movement.

Clearly, Lana Witt and Jax Myer and their group have made a great impression on the General Assembly, other activists and the people in North Carolina.

Myer and his team are learning about the power of citizen involvement in activism and lobbying. Myer has a podcast on Mondays and can be seen on Twitter.

Witt, the leader of the group, told me that they welcome all new participants, and they have focused their activist approach on “impacting 7 areas of social influence”.

Together they are the inspiration for the Free The Smiles Act

“Right now I am dedicating my activist hours to this group.  We have had great success so far learning the process, making contacts at the General Assembly building and we have actually impacted legislation, that is a big deal,” Myers told me.

Republican Lt. Governor Mark Robinson supported the group’s activism with encouragement. In the photo below Robinson, who started his political career as an activist, is signing the poster that inspired the naming of the bill.

The Lie has to end, n muzzling our children has to stop, we need to think of it as what it is.. CHILD ABUSE N NEGLECT. Please share and show up NC#tableproject #ncschoolchoice #unaltered1776 #NorthCarolina #NC #apex #apexnc #cary #hollysprings #morrisville #raleigh #fuquay pic.twitter.com/0AZ8yLbUrj

You can find Jax on Rumble for a weekly podcast Mondays at 6 pm EST.