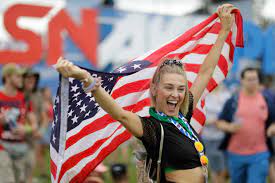 While the first week of the month of May at the Indianapolis 500 is in the books, good news has been announced for those who participate in the race activities from the historic Snake Pit; track attendees will be able to provide themselves with some nice cold refreshments this year.

After COVID forced changes at the track for the last two years, the good news about the 106th race is that normalcy is roaring back with a vengeance!

(Snake Pit Partiers- some years ago)

All the traditions are coming back to normal.  Well, sort of- because all race fans know that the Snake Pit has a bit of lore and mystery that is special in all of American history of racing.

The IndyStar reported in 2019:

While many have heard of the Snake Pit in recent years, not as many might know that it has actually been around since the 1950’s! Formally located in Turn 1 of the infield, the Snake Pit has always been a place at IMS that is laden with heavy alcohol consumption and rowdy behavior.

Throughout the years, there have been number of attempts at cutting off the heavy partying. In 1975, IMS allowed vehicles to park in the area in effort to take up space and disperse the crowd. Unfortunately, that did not work, as the crazy behavior continued to escalate, and in 1980 resulted in a fatality, as someone ran over a fan with their vehicle.

Officials had enough, and in 1981, infield bleachers were placed in Turn 1 and several upgrades were made in other areas of the infield, which cut the area down considerably. While, at first, this seemed to help, it was only a matter of time before the party was moved to a different area, Turn 4 of the infield to be exact. This “new” Snake Pit area did seem tamer, but only by a small margin, and when Tony George became the new head honcho, real changes were finally made.

George hired a large contingent of police enforcement to infiltrate the rowdy area, which tamed the crowd. Additionally, the track built a road course to that took up a lot of space in Turns 1 and 4 of the infield. Finally, it seemed that the Snake Pit was a thing of the past, but so was the appeal to the younger crowd.

In 2010, new management made the decision to bring back the Snake Pit to draw in a new wave of Indy 500 fans. It would be located in Turn 3 of the infield and would be a much more controlled environment. The new and improved Snake Pit was completed in time for the 2011 Indy 500, but was no longer be a free-for-all drunk fest. It was, instead, a concert featuring the popular EDM acts of Action Jackson, Andy and Annie Skinner, and Andy D.

Since its revival, the Snake Pit has continued to grow in popularity. Go to www.indy500snakepit.com for more information. And enjoy this video- and also- by the way, you can pack a cooler, now.

The Indy Star reported on the updated rules this week about coolers:

Pack your coolers and bring them to the Indianapolis 500, Hoosiers.

Reversing its previous guidance, the Indianapolis Motor Speedway is allowing Snake Pit attendees to bring coolers into the May 29 event, officials announced Thursday.

Coolers and bags must measure no larger than 18”x14”x14” in size. Coolers can be hard- or soft-sided. All coolers and bags will be checked for size. Glass bottles are prohibited at IMS.

The Snake Pit is back! Concert lineup announced for 2022

Amanda Stanley, communications director for IMS, told IndyStar the decision to reverse the ban was made because they were able to “increase the physical footprint of the concert space.”

“There’s more space, which makes it more suitable to allow coolers inside that space,” she said.