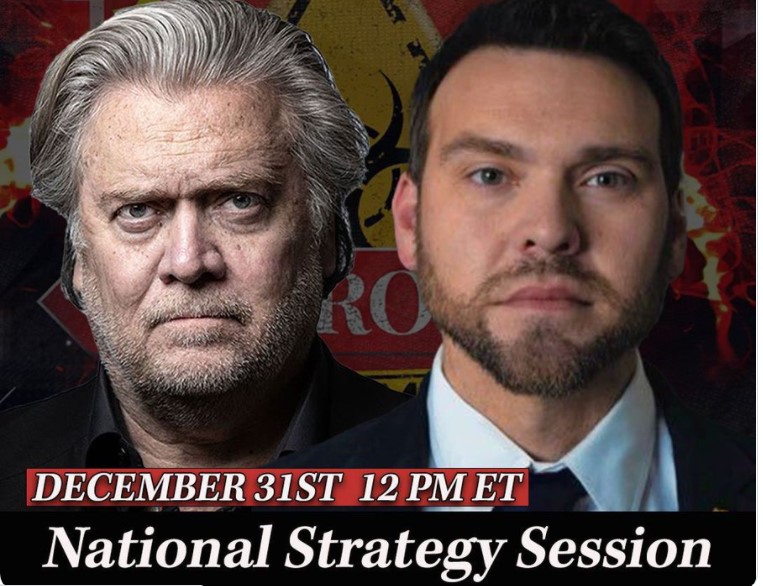 The caisson of Stephen K. Bannon’s strategic political tactics is about to be explored by Senior Human Events editor Jack Posobiec- a former Navy Intel Officer and China analyst.

“It’s going to be what I call Deplorables vs Overlords,” Posobiec, a Warroom Co-host, told me about his upcoming Friday interview with Bannon.

That description is so fitting, considering the history of the publication merged with the history of Bannon’s political work over the past 15 years or more.

According to Wiki, ” Human Events is a conservative American political news and analysis website. Founded in 1944 as a print newspaper, Human Events became a digital-only publication in 2013.

Human Events takes its name from the first sentence of the United States Declaration of Independence: “When in the course of human events…”.

Fans of Bannon’s know his warm embrace of American history, all of it- both good and bad. Not one for “happy talk” Bannon is a brutal realist- but sometimes that is exactly what people need to hear to understand the importance of the situation.

And the situation for Americans, with the massive loss of civil liberties, does not call for pleasant tea party talk. The country needs a leader like Bannon, who understands the importance of political action- like winning elections.

We need lots of Bannon “firebrand” populists to fill up the Republican party at every level. Bannon talks a lot about winning at politics.

No matter how unpopular it is with Bannon’s Warroom viewers, he often talks about his admiration of people like radical and rebellious leftists- Marc Elias or Stacey Abrams. “I don’t agree with their politics, but I admire how they fight for their cause. Republicans could use more people like that,” Bannon said on the Warroom Pandemic. “I want to know where our Stacey Abrams and Marc Elias are.”

Bannon, who Fox News host Maria Bartiromo once said was the most well-connected man in DC. has plenty of people who seek his political advice. Political strategy is the main reason the Warroom has grown so popular. This interview should be well watched, like a firebrand reunion.

“This is like free coaching,” Posobiec said when I told him about how many 2020 candidates I knew who tuned into the War room podcast to hear Bannon’s point of view on the Trump Impeachment, that Bannon predicted in 2018 would happen.

Knowing Posobiec’s passion for the MAGA Deplorables, it is assured that he will seek out some deep-buried treasures in Bannon’s political mind.

According to Posobiec, the interview with Bannon will be live at Noon ET Friday, December 31, and will be a ‘National Strategy Session’.

“It will be 1 hour, one on one. We go from the removal of God in society to the CCP/Wall Street alliance, to Nietzsche and the Gospel of Mark, Elon Musk’s Neurolink, transhumanism, and predict we will see Artificial Intelligence Warfare in our lifetime,” Posobeic told me.

“We will run it all New Years Weekend,” Posobeic said.

Prepare for some thought-provoking content. Bannon has spent over four years defending the Populist-Conservative movement he was instrumental in helping create. He knows every nuance of the people, places, and things- that make up the Trump movement.

Recall that for the 2018 midterms, Bannon’s movie Trump At War was some of the only honest political commentaries on what America faced if Democrats took the US House. Everything Bannon warned us about came true.

Bannon made this movie free to millions of Americans ahead of the 2018 midterms:

Forward this information to 2022 candidates searching for solid advice on messaging, branding, and PR because, as most Americans know, the United States of America needs to declare our Independence from the left and its many foreign allies once and for all and we are going to need plenty of people with the backbone to do the heavy lifting.

For as scary as the 2018 midterms became, the 2022 midterms are even more bone-chilling for the lifeblood of America.

IT IS TIME FOR HUMAN EVENTS

When in the Course of human events, it becomes necessary for one people to dissolve the political bands which have connected them with another, and to assume among the powers of the earth, the separate and equal station to which the Laws of Nature and of Nature’s God entitle them, a decent respect to the opinions of mankind requires that they should declare the causes which impel them to the separation.